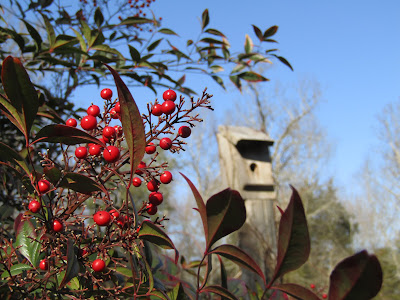 Hello, friends. In preparation for needing to eat soft foods after a dental procedure, I made two batches of soup. One was pumpkin, and the other broccoli almond soup, both with homegrown vegetables. I also borrowed books and got a movie from the library, an anticipation of some down time. The greens in the pond garden were fertilized with fish emulsion. I planted Frosty peas, given to me by a friend, which can be planted with cooler ground temps. The last few years we planted peas, it got too warm before they did much, and I hope these will thrive. It's been an especially warm winter so far. Daffodils are up. Some already have buds formed. Many spiderwebs were seen. I even heard peepers earlier this week. It's been some time since I mentioned it, but if you could use some companionship on your frugal journey, I'm joining in here. 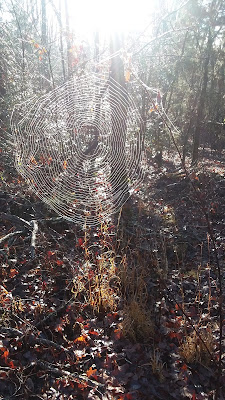 I used leftover sweet potatoes to make muffins. The recipe suggested using banana, if you didn't have quite enough sweet potato. I did this with one that needed using, which worked perfectly. We did without any heat for two days, with the unseasonably warm temps. I found another five lettuce volunteers in the garden, and transplanted them to the cold frame. Kale was harvested for a latke dish. We didn't love them, so they won't make it into our rotation. I tried having two with a fried egg, which was slightly better, but still not my favorite. The chickens may get a good portion of them. I pulled a summer squash dish from the freezer to go with dinner one night. Another night, I made pizza with a crust and pizza sauce I had made earlier and frozen. Our garlic and sweet peppers were used in the toppings. 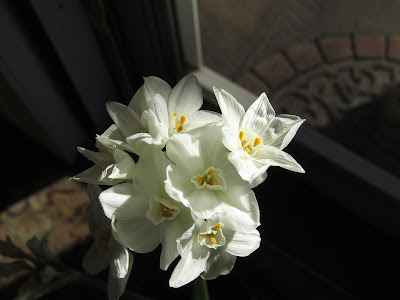 The paperwhites have begun blooming. The scent is not my favorite, but I don't mind it very much. I think having cheery blooms makes it worth it. My SIL and I firmed up plans to visit the Downton Abbey exhibit at Biltmore House this spring. I'm excited about that. It won't be a frugal week, but we spent some time looking for lodging, and ended up with a nice air bnb that will be half as much as the original hotel we were considering, and only 2 miles from the exhibit. We also got $10 off the usual ticket price. Another one of the things that came from the shed clean out was a push mower that looked like it had hardly been used. J got a chance to check it out, and it appears all it needs is a $1.83 diaphragm, because ethanol gas was used in it. I'm grateful to have such a hard working and knowledgeable husband. 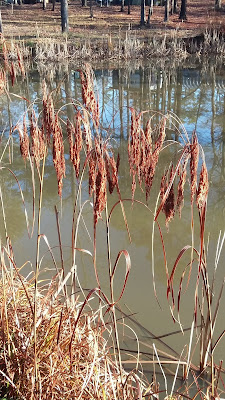 I caught up on soap wrapping over several days. J got some more raw peanuts, so I started another batch of them boiling on the stove, then transferred them to the wood stove. They'll be used in the winter succotash recipe. Magazines were dropped off in the free basket at the library, when returning a movie. A dish of green beans and garlic was made, butternut squash crumble was pulled from the freezer, and a salad with homemade dressing made to round it out. I checked our daily electric usage, and was surprised to see the highest use during the night, which I realized was the electric heater we have in the crawl space to keep the pipes from freezing. After asking J about it, and him looking into a more efficient way to do this, I bought heat wrap for the pipes. Some of the night hours were 4x the power use at noon, on a day I was at home, and it never got below 30! I'm hoping this makes a big difference. 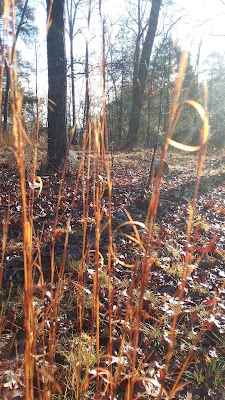 We began a new jigsaw puzzle, something we've been enjoying on long winter nights the past few years. It's been too long since I cleaned dog nose art from the storm doors. I got to that on Sunday, with my squeegee, and no more expense than a few drops of dish soap. A batch of sweet potatoes was cut up and put in the dehydrator, for dog treats. A fresh batch of yogurt is warming on the heating pad as I type. Two sweaters, a sock and a nightgown were mended. I went through swagbucks for a purchase. We shared our wood ash with a chicken loving neighbor. She mixes it with diatomaceous earth and sand for dust baths. Tomato rice loaf was made, which used our tomatoes, garlic and homemade bread crumbs. I'm still enjoying my "nature" tree, which continues to exude the most delicious scent. It was especially nice to have some slower days this week. The rhythm of winter asks us to slow down, and enjoy the stillness, and I did just that. Wishing you peaceful days, dear friends.
Back to News
Use left/right arrows to navigate the slideshow or swipe left/right if using a mobile device