The window well fixit guys showed up right on time this morning and got the job done in a few hours. They had to dig out the dirt by hand and use a loooong post hole digger to scoop out the dirt that had fallen into the drain pipe that the previous fixers had installed. They filled it with lots of gravel and even put gravel under the soil around the well so that it drains well. I hope that this takes care of the problem, at least for a while, at least until after I sell the place.

When I filled the birdfeeders this morning I saw that the sedum is sprouting up on the retaining wall. I like the little fists of green popping out from the brown wood chips.

The daily art today took some courage. It said to quickly sketch things around the house and suggested using a liner pen to prevent smudging. Draw in ink without starting with pencil? Scary, but I did it. My rendition of the camera is a little off kilter but I'm pretty pleased with what I managed to produce. (The plant was printed on the page when I started.) 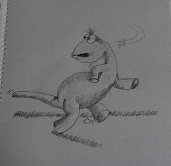 The next figure in the 3-D book was this Jumbo Jogger. I think it's kind of funny, a jogging dinosaur. It's getting easier to draw the things in this book, probably because the book is aimed at children.

I have a bigger challenge when I draw out of the 10-Step: People book. This is my third, and best, attempt at drawing an eye. I'm sure that drawing one looking in the other direction would take at least that many tries. The right-hand nose looks a bit more realistic, I think, and neither ear looks right to me. Guess I'll have to give that one another try. 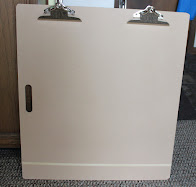 The UPS man brought the drawing board which is the last item I need for my watercolor class. It's huge. Watch, I won't paint one painting using a half sheet of paper so won't need this large, clunky board but if I didn't have it I'd have needed it. I had a 25% off coupon so it wasn't too expensive. 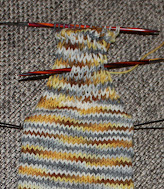 Tonight at Friday Night Knitting I made the heel flap and turn of the Owl Sock. I was very impressed with my ability to turn the heel while sitting and talking with friends. I confess that I did more focusing and less talking while knitting that part. Next I pick up gusset stitches, decrease back down to my original number of stitches, and then knit my way down the foot.

I didn't toss anything today. I spent a lot of time drawing and Zoomed quite a bit of the afternoon so I just didn't get around to it.

It turned out to be a nice day, sunny and warmish, a good day for fixit men to be working outside. They told my renter what cover to get to keep leaves and trash out of the wells so I went to Menard's for them. Naturally I bought the wrong size so I'll return them for the correct size tomorrow. Which is Saturday and not the optimum day to be in the home improvement store but I'll brave it.