Unmatched: Redemption Row Brings Marvel Characters Into The Best Board Game Series Around 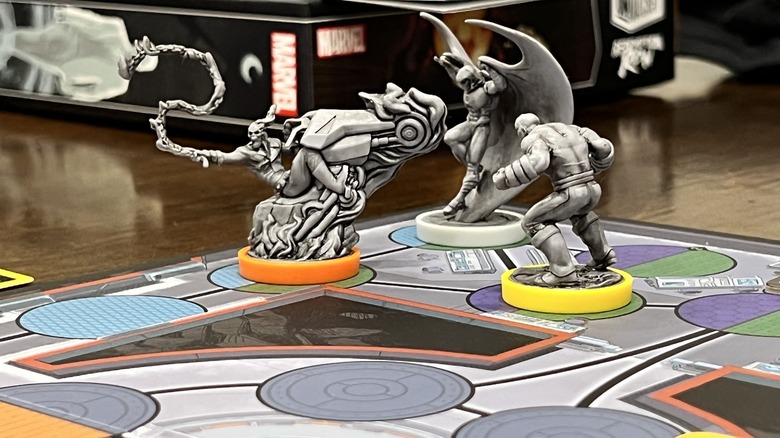 For several years now, anyone asking me for advice on a board game purchase has heard me talk about Unmatched. Simple without being simplistic, deep without being complicated, and thematic without losing sight of tight, balanced gameplay, Restoration Games' series of card-driven dueling games has been a joy to play, and a joy to collect. Come for the chance to play out wild battles between combatants from across literature, legend, and pop culture (sets include everything from "Jurassic Park" and "Buffy the Vampire Slayer" to Victorian-era genre characters and legendary folk heroes), but stay for the tight gameplay, the stunning art from a roster of top-notch artists, and the beautiful miniatures.

And while each entry in the series so far, whether played standalone or mixed with other sets, has been marvelous, they haven't been Marvel-ous. Ahem. Yes, the superheroes of the Marvel comic book universe have entered the fray with the latest set, Unmatched: Redemption Row, and fans of both these characters and the larger Unmatched game system are going to find a lot to love about what this set brings to your table

So, how do Moon Knight, Luke Cage, and Ghost Rider play when they're engaging one another in combat across a devious map depicting the Marvel supervillain prison known as The Raft? Restoration Games sent us an early copy of the game, which is available for order now, to find out. 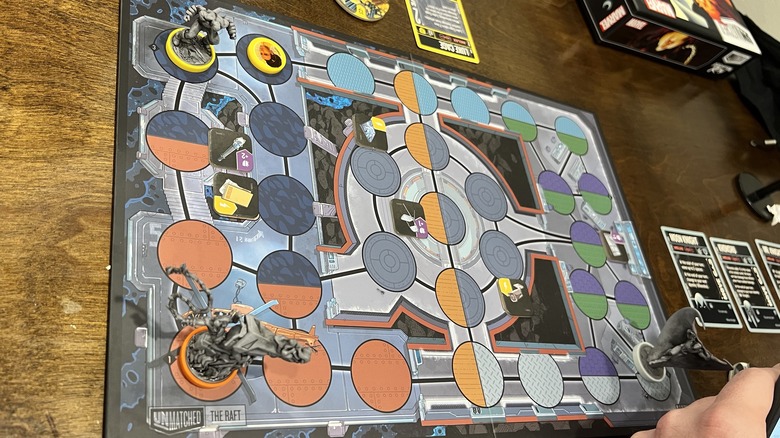 If you've played any version of Unmatched before, you'll be able to jump into Redemption Row with minimal prep. Like with past boxes, the same rule set governs these new characters, and with the exception of a handful of new rules and exceptions, this one will fit veterans like a glove.

But newcomers shouldn't worry — Redemption Row is a breeze to learn, with all necessary rules and reminders contained on a helpful reference card. Even this deep into the line, Unmatched remains a model of elegance, and Marvel fans enticed by this set but unfamiliar with the larger world of the game can jump right in and enjoy this box and this box alone.

It's simple, really: two to three players (Redemption Row comes with three characters, but the board is built to support up to four if you mix in other characters from other Unmatched sets) control a character on the board. Their every action is determined by the cards in their hand — and managing that hand and knowing when to strike, when to run, when to get aggressive, and when to go on the defense, is the beauty of the game. Even with minimal rules, your options feel limitless, and even though those same rules apply to each character within Redemption Row, each deck of cards is wildly different. Playing Luke Cage is nothing like playing Moon Knight, who is nothing like playing Ghost Rider. Learning the ins and outs of each deck is the fun of it all, and during my time with the game so far, I felt actively torn between wanting to stick with a single character to master their nuances and a desire to try everyone and get a little taste of everything. 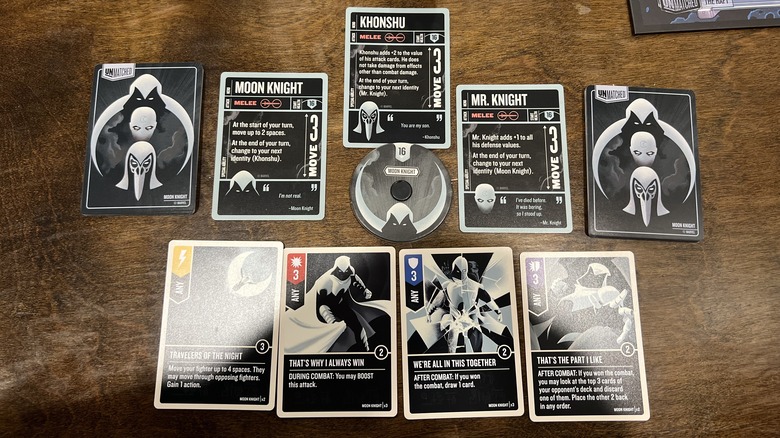 With his massive cape simulating a hero in flight, Moon Knight is one of the best miniatures I've seen in any Unmatched game. But he's more than a pretty piece of plastic — he's a blast to play, and the unique quirks of his deck perfectly reflect the comic book character himself.

Whereas every other Unmatched character has a single-character card with their special rules and abilities, Moon Knight has three, representing the superhero's fractured mind and multiple identities. There's Moon Knight, who has increased movement. There's Khonshu, who hits a lot harder. There's Mr. Knight, who has a permanent buff to defense. Since the Moon Knight player has to switch to a different personality at the end of each turn, planning ahead is vital. A wily Moon Knight player can examine the state of the board, look at the current rotation of their personalities, and plan their next several moves in advance, maximizing each character card's personalities.

Landing a perfect combo because you used Moon Knight to get into position, Khonshu to strike, and Mr. Knight to defend against retaliation is a thrilling feeling, one that feels at once like you're actually controlling Moon Knight and making clever, tricky, and fun choices. 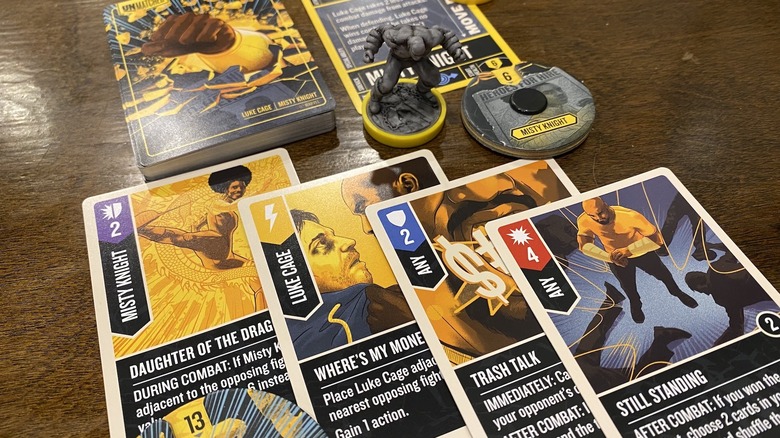 Players who are less interested in careful strategy and thinking several turns ahead will gravitate to Luke Cage, the hero for hire with bulletproof skin who hits hard and absorbs punishment like no one else in Unmatched. In addition to a deck of cards that can pummel your opponents into oblivion (yes, comic fans, his heaviest hitter is called "Sweet Christmas!"), Cage's innate abilities make him a pain in the butt to damage. Any attack that lands two or less damage is instantly ineffective. Getting through his defenses requires real strategy, because a typical head-on battle of strength will result in Cage wiping the floor with you.

Luke Cage is also the only character in Redemption Row to have a sidekick, an additional token that offers back-up on the board. And while you'd think longtime Cage ally Misty Knight would lead to overkill, it's all part of this deck's careful balance. Fighting Luke Cage is like fighting a brick wall, but eventually, a brick wall is going to fall if you chip away at it just right. The only thing more fun than playing as Luke Cage and watching the other characters flail helplessly against him is plating against Luke Cage and coming up with the perfect card combination to take him down. 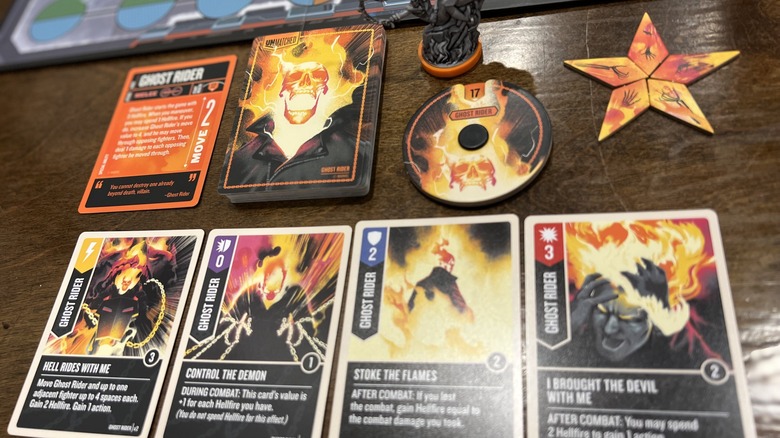 Falling somewhere between the careful strategy of Moon Knight and the rock 'em, sock 'em action of Luke Cage is Ghost Rider. Astride his motorcycle and armed with all manner of powers granted to him from the literal depths of Hell, this Marvel anti-hero is a hoot to control and a pain to battle.

The player has access to five "hellfire" tokens, which serve a number of purposes. They can buff Ghost Rider's movement, and allow him to drive through enemy characters, damaging them in the process. They can be spent to increase attacks, power up defenses, draw fresh cards, and even manipulate the battlefield in unique, surprising ways. And while the deck offers plenty of ways to replenish these tokens, knowing when to spend them and when to hoard them becomes the key to effectively playing the character. You will know ultimate triumph when you corner another character with all five of your tokens available, and you will know ultimate despair when you find yourself cornered, your precious resources depleted.

Like with the other characters, the balance between tight gameplay (mange your hellfire well and you hold a distinct advantage!) and fitting thematic touches (you genuinely feel like you're making use of Ghost Rider's powers!) feels like it was engineered with actual care and precision. No mechanic is here by accident — every choice exists to give gamers options and to give a comic fan the chance to feel like they've stepped into a pitched battle between these heroes. 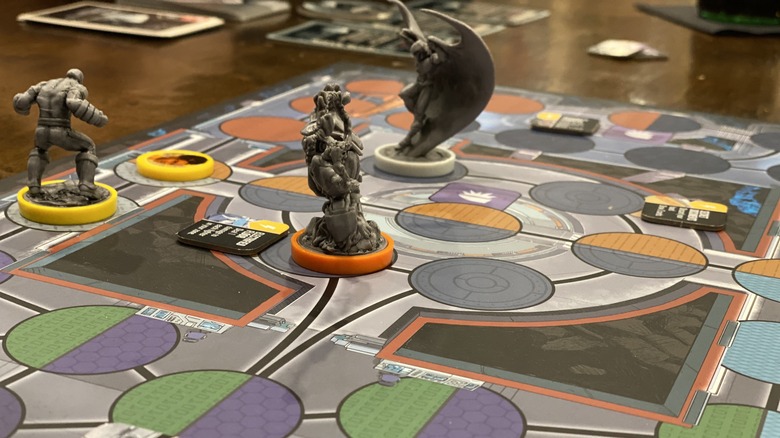 I was able to test Unmatched: Redemption Row with two other gamers familiar with the Unmatched system, and if you're looking for a short and sweet recommendation, here it is: this is a terrific box, a must-buy for the initiated, and a great starting point (or even ending point, if you so desire) for newcomers looking for a fun Marvel tabletop experience. This is an aesthetically thrilling product — Matt Taylor's art across the box art and cards is outstanding, and Ian O'Toole's minimalist approach to the game board continues to distinguish itself — but it's more than just cool minis and strong art. The Unmatched system works, it works well, and this set is a great time. The new additions, like "battlefield items" scattered across the board that offer bonus and one-off abilities, are a fun addition, and it's easy to see them being further utilized in other Unmatched sets.

And like the best board games, each session tells a little story. Why are Moon Knight, Ghost Rider, and Luke Cage battling each other across The Raft? That's your choice. But the ups and downs, the big swings, the bigger misses, the comebacks, and the glorious victories that were present in previous Unmatched sets continue to feel special here. It's rare to find a gaming system this balanced that also feels like high drama once everyone at the table is playing to the best of their abilities.

I will say that Moon Knight proved to be the big winner during my time with the game, with each player taking advantage of his flexibility to float in and out of the fight while Ghost Rider and Luke Cage whittled each other down. But by our final session, we all discovered this wasn't a case of imbalance, but more of the other players realizing they should've clued into the threat and reacted accordingly. Luke Cage and Ghost Rider should've realized who the real enemy was and put their differences aside and teamed up to take down the real threat. 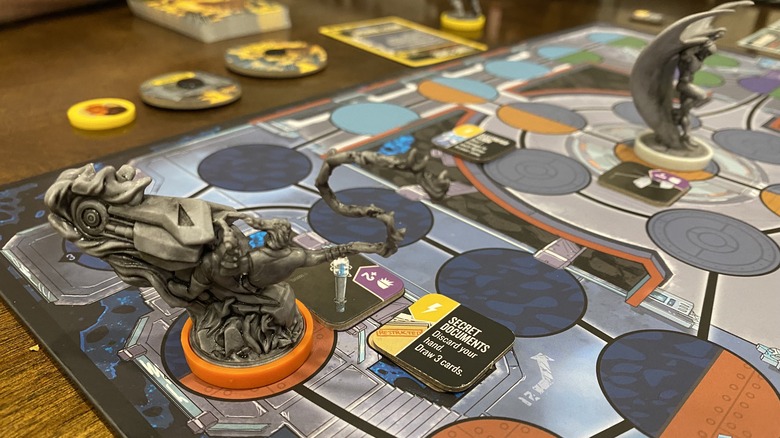 The one thing I haven't had a chance to try yet is mixing the Redemption Row characters with previous Unmatched sets. I'm personally itching to see Ghost Rider fight the raptors from "Jurassic Park," or to watch Moon Knight go toe-to-toe with Sherlock Holmes. And with more Marvel sets coming this year (a Daredevil-themed set, Hell's Kitchen, is also currently available to pre-order), the Unmatched universe is going to have no shortage of new superheroes to mix and match with previous boxes.

But the real beauty of Unmatched is that you can buy as much or as little as you choose. For some, Redemption Row will be enough. For the dorks like me, this is the latest piece of a long, ongoing addiction. But one thing is clear: Restoration Games landed one of the biggest licenses out there and delivered an experience that stays true to their system while honoring characters beloved by people all over the world. I cannot wait to get this set to the table again. Mostly so I can properly beat the crap out of Moon Knight.

You can order Unmatched: Redemption Row at the Restoration Games website now.

Read this next: Every MCU Post-Credits Sequence Ranked From Worst To Best

The post Unmatched: Redemption Row Brings Marvel Characters Into the Best Board Game Series Around appeared first on /Film.