The fight to save teeny, tiny Sadie-Baby.

Who: Sadie-Baby, one of 13 mixed breed piglets

The problem: After giving birth, Sadie’s mother lay down more than usual and refused food, a very unusual thing for a pig. Her piglets didn’t appear to be drinking much, if anything, and some passed away.

Sadie’s mother had contracted a nasty infection called MMA (mastitis, metritis, agalactia) Syndrome, a bacterial infection of the teats and uterus. It sets in very soon after a sow gives birth, usually in the first three days, and causes a severe drop in milk production.

Piglets quickly starve. Also, as they haven’t had adequate colostrum, they’re highly susceptible to picking up infections as well. Sadie’s mum received drugs to fight the infection and stimulate milk production. The piglets were treated for bacterial infections, fever, and vomiting.

The sow made a brilliant recovery, and most of the piglets bounced back once her milk started flowing again.

But Sadie wasn’t so lucky. After a few days, her owners rang to say they didn’t think she’d make it through the night. That led to a hasty decision. I’d adopt Sadie and give her the intensive care she’d need if she were to pull through.

The investigation: When I picked up Sadie, she was about 10 days old, frail, and very thin. She hadn’t gained any weight since birth and weighed just 700g – that’s approximately half the weight of a healthy newborn piglet.

Occasionally she would murmur tiny oinks, calling on her fading energy to talk to me, before collapsing again and closing her eyes. Sadie in her box when I picked her up. She was just 700g, very skinny (you can see her tiny ribs), and weak.

Once home, it was clear Sadie was enticed by milk, but she wouldn’t drink it. When I tried syringe-feeding a few millilitres into her, she immediately vomited up copious amounts of fluid.

A bacterial infection was causing Sadie’s extreme nausea and fever, and meant she was also severely dehydrated.

Because she’d had minimal fluids since birth, she was also involuntarily twitching and shaking due to severe electrolyte imbalances.

The treatment: Her dehydration and electrolyte imbalances were the most pressing concern. I gave Sadie fluids (injected under the skin) and the strongest available anti-nausea medication.

Within 30 minutes, her nausea subsided, and she began drinking small amounts of electrolytes from a syringe. 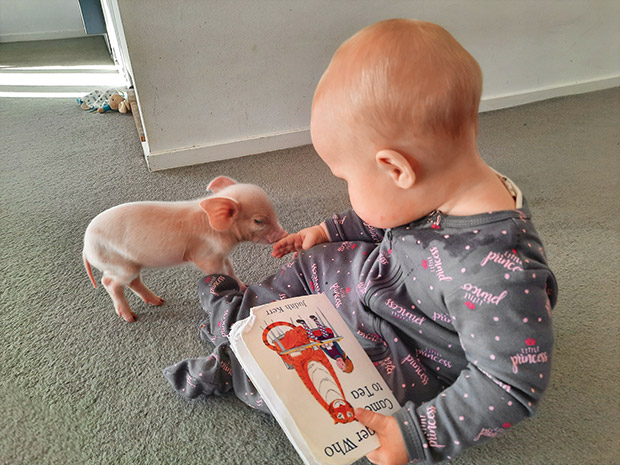 Young piglets can’t regulate their body temperature. When they’re sick it’s crucial to maintain body warmth. Sadie was wrapped in an emergency blanket and lay on a heating pad, snuggled up to a warm wheat bag. I dressed her in a woollen jacket made from a child’s sock.

Fortunately, I didn’t need to use a stomach tube, which is risky in a piglet as tiny as Sadie. Instead, every 40 minutes, I syringe-fed her milk and electrolytes, mimicking the feeding frequency she’d naturally get from her mum, slowly increasing the volume each time.

At 2am, I woke up to a weak ‘oink, oink, oink’ and found her standing for the first time in 12 hours, looking around her hospital box.

In the first five days, Sadie’s weight doubled. A week later, it had tripled. I found her a home with a family on a lifestyle block where she has young kids to play with and a loving human mum who continues to feed her around the clock.

Sadie now drinks from a bowl and has outgrown her sock. You can check out video of Sadie playing with her new family’s dog on the Franklin Vets Facebook page (‘Franklin Vets Lifestyle farm‘).

WHAT A PIGLET NEEDS TO SURVIVE 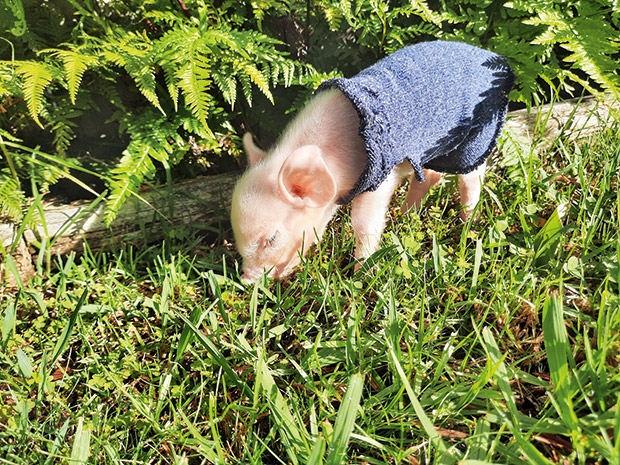 Orphan piglets are time-consuming to rear by hand, but it’s so rewarding. Often a poorly piglet can’t get the feed it needs because its mother has a poor milk supply or too many piglets.

The demands of newborn piglets are simple.

Goat milk is the closest compositionally to sow milk, so it’s easiest for a piglet to digest. However, a commercial calf milk replacer will do the job (once a piglet has had 2-3 days of colostrum).

Piglets drink from their mother every hour or so, so frequent feeding is necessary to prevent blood sugar levels from dropping too low.

Many piglets die from the cold. Unlike other mammals, piglets aren’t born with brown fat reserves and can’t regulate their body temperature. The highest risk is in the first three weeks of life, but they can become hypothermic at any age.

Sows emit intense body heat when nursing, and piglets huddle together for warmth. An orphan needs an environmental temperature of at least 34°C.

You can use a warmed wheat bag or hot water bottle (covered with a towel for protection from burns). However, I recommend a heating pad for longer-term temperature regulation.

When do sows wean piglets?

A sow naturally weans her piglets when they’re 14-16 weeks of age.

Until this time, they live as a close family unit. Eventually, their mother starts to feed them while she stands instead of lying down. Then she shortens the time they can feed before weaning them completely.

How smart are pigs?

Pigs outrank dogs in IQ, especially in problem-solving. They’re also considered to be more trainable than a cat or a dog.

Research suggests pigs have excellent long-term memories, are skilled at mazes, can remember the location of objects over time, learn from each other, and understand empathy.

The post This little piggy stayed home with a vet — and survived near-starvation appeared first on thisNZlife.