See You Yesterday, by Rachel Lynn Solomon for Timeslip Tuesday 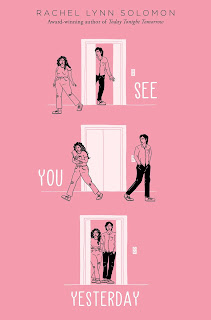 See You Yesterday, by Rachel Lynn Solomon (YA, May 2022, Simon and Schuster) is a very entertaining and rather moving ground-hog day sort of time slip story.  It's Barrett Bloom's first day of college, and she is eager to put the heavy weight of high school behind her, and start afresh.  But she wakes up to find that she has a new room-mate--a girl she was once friends with in high school, who turned into an enemy.  And her day doesn't get any better--humiliated by Miles, a smart aleck boy in Physics class, flubbing her chance to get a position on the college newspaper, and culminating with setting a frat on fire.  Not the first day she wanted....but it isn't her only chance.

When she wakes up the next day, it is the first day all over again.  And Barrett can't do anything about it but try to do better (and successfully avoid the frat fire).  Then Miles seeks her out--he has also been stuck in a repeating first day loop, in his case for weeks already, and he's glad to have a potential ally in figuring out how to get unstuck.  Gradually Barrett and Miles, thrown together day after the same day, start to appreciate and trust each other, taking advantage of their situation to seize the day and do all sorts of fun and whacky stuff (like treating all 15 dogs in the shelter to a grand day out, wildly spending money on adventures and free ice cream for everyone on campus, and more).  And gradually they open up to each other, sharing their secrets and past traumas.  And as day follows the same day, they fall in love....learning each other, delighting in each other, treasuring each other.

But if time starts flowing like it should again, will their love last?

There's lots to like here.  Barrett isn't a standard sexy YA heroine--she's plus sized, abrasive, prickly, and impulsive.  A lot of the prickly and abrasive part comes from the trauma of her high school experience, which includes a really horrible episode in which the guy who asks her to prom, and then has (consensual, though not great) sex with her, turns that into a public humiliation nightmare for her. She wants to be someone different, but it turns out that Miles loves her for who she is, and she is just the right person to pull him out of his reserve into the flow of life and laughter. Barrett is Jewish, and Miles is Japanese Jewish, and their shared Jewish-ness is a part of their growing relationship, and Barret's mom is about to marry her girlfriend, which also makes this story have a nice outside the standard mold taste to it.

But mostly the fun and interest comes from Barrett and Miles making each new/same day different and extraordinarily, days in which they are able to grow and change.

I'm not sure it needed to be over 400 pages long, but I am sure that YA readers who want entertaining cute and introspection-provoking romance will not care.

A nice time travel touch was Barrett and Miles seeking out a physics professor who was basically forced to resign after her high level course on Time Travel outraged parents.  She wasn't able to give them a magic solution, but did nudge them toward the exit point of their loops, and I liked how the time travel was neither entirely fantastical or entirely scientific, but a bit of both.  I also liked the lost sock that was an important key to it all....lost socks are powerful, mysterious entities!