If only ultra-conservatives in Texas cared about the constitution. 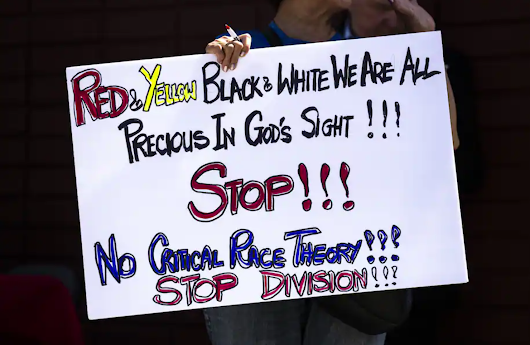 Ronald J. Krotoszynski Jr. is a professor at the University of Alabama School of Law and author of “The Disappearing First Amendment.”

Across the United States, state legislatures are showing a newfound interest in — and aversion to — critical race theory, or CRT, an academic movement that systematically considers how even seemingly neutral laws, regulations and social norms can have different impacts on particular racial and ethnic groups. It examines how legislatures at times target racial minorities for adverse treatment — such as recent voter suppression laws in Arizona, Georgia and Iowa — and, at other times, are simply indifferent to how new laws will impact those outside the majority.

CRT originated in U.S. law schools in the 1970s and remains well established and widely accepted there. But in recent weeks, some Republican-dominated state legislatures have adopted laws that ban the teaching of critical race theory in public schools. Some, such as the laws in Idaho and Oklahoma, even restrict the use of CRT in public colleges and universities. Other states, including Georgia and Utah, are actively considering similar legislation or administrative action. A bill has even been introduced in the U.S. House (where the Democratic majority presumably will reject it).

These laws are both misguided and unconstitutional; they constitute bad educational policy, and in the higher education context, they violate the First Amendment. At a time when we desperately need to have more frank and open conversations about race, class, social justice and the concept of “the other,” they hamstring educators charged with preparing young people to live and work in an increasingly diverse society.

Oklahoma’s new law, H.B. 1775, is illustrative. It flatly bans the teaching of CRT concepts in the public schools — prohibiting any “teacher, administrator or other employee of a school district, charter school or virtual charter school” from requiring CRT concepts as “part of a course.” The law also prohibits diversity and inclusiveness training programs in the state’s institutions of higher learning, banning “any form of mandatory gender or sexual diversity training or counseling,” as well as “any orientation or requirement,” that includes CRT critiques.

In Idaho, H.B. 377 broadly defines “tenets … often found in ‘critical race theory’” and proceeds to forbid any “course of instruction or unit of study” that requires any public school, charter school, college or university student to “affirm, adopt, or adhere to” them.

As applied to public K-12 schools, these laws might survive judicial review, because states enjoy broad constitutional authority over the curriculum. Public universities, however, are a different kettle of fish.

Since the 1950s — when a Red Scare mentality led legislators to try to ban the teaching of communist or socialist theories in state educational institutions — the Supreme Court repeatedly has held that universities, as well as individual professors, enjoy a First Amendment right to academic freedom. A state government cannot force a university president, provost or professor to serve as a sock puppet for the legislators’ preferred viewpoint.

In Keyishian v. Board of Regents, decided in 1967, the court invalidated New York’s Feinberg Law, which imposed a loyalty oath and proscribed the teaching of “subversive” doctrines in the state’s colleges and universities. Writing for the majority, Justice William Brennan Jr. observed, “Our Nation is deeply committed to safeguarding academic freedom … a special concern of the First Amendment, which does not tolerate laws that cast a pall of orthodoxy over the classroom.” A unanimous Supreme Court reaffirmed Keyishian in the 1985 University of Michigan v. Ewing decision, holding that “academic freedom thrives not only on the independent and uninhibited exchange of ideas among teachers and students, but also … on autonomous decisionmaking by the academy itself.” And, in 2000′s University of Wisconsin System v. Southworth, Justice David Souter cited a bevy of precedents while observing that “we have long recognized the constitutional importance of academic freedom.”

Laws that seek to ban ideas that legislators dislike quite literally cast the “pall of orthodoxy” these rulings decry. And the First Amendment certainly protects the right of a state-sponsored college or university to address issues of race, class and inequality in its curriculum. In fact, CRT is today a standard upper-level elective at most law schools — including here at the University of Alabama, where a CRT class is taught by one of the founders of the theory, Richard Delgado. The acceptance is unfortunately not universal, as is clear from the University of North Carolina at Chapel Hill’s refusal of tenure for Nikole Hannah-Jones, noted for her association with the New York Times’ 1619 Project and critical race theory.

The whole point of higher education is to open minds and horizons — to engage with controversial ideas and arguments. State governments should welcome, rather than stifle, candid discussions of race, class and social justice.

Justice Felix Frankfurter, concurring in a 1952 decision that rejected an Oklahoma loyalty oath for all educators on the state’s payroll, characterized teachers as the “priests of our democracy.” He warned that they “cannot carry out their noble task if the conditions of a responsible and critical mind are denied to them.” He was — and is — correct. Educators cannot do their job if state governments attempt to ban the teaching of ideas they fear — and are willing to violate the Constitution to do so.

Karen Attiah: Texas wants to suppress our history, too

Alyssa Rosenberg: Hey conservatives, this is why liberals don’t believe you care about free speech

Paul Waldman: The new shape of the culture war is a revived Lost Cause

Matt Bai: Are we all being canceled? No. But the cultural revolution is real.

Lizette Alvarez: Florida Republicans are trampling on the wishes of locals in a rush to consolidate power