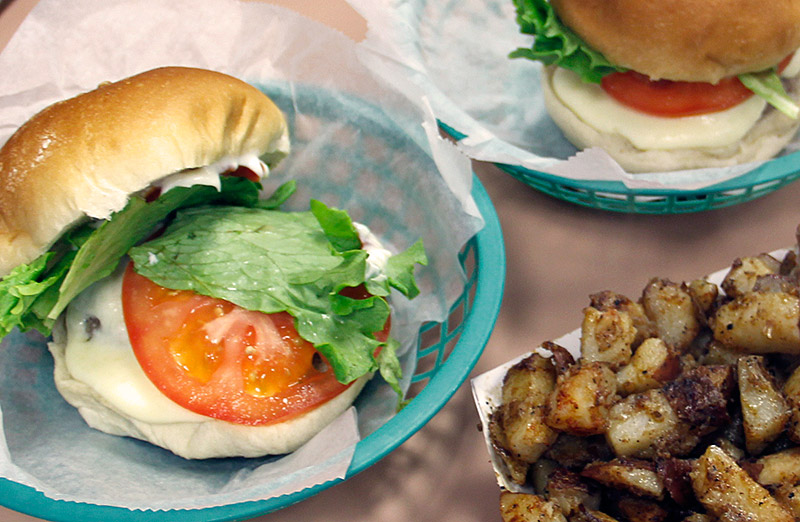 I have a dream — a dream that all cheeseburgers will be judged not by the color of their beef, but by the content of their buns.

That dream may never come true for steamed cheeseburgers.

It all boils down to this: ground beef cooked in a stainless-steel cabinet, with steam-melted Wisconsin cheddar cheese, spooned onto a hard roll with toppings. I’ve eaten steamers since 1984. Folks in Meriden, Connecticut, have loved and eaten steamers since they were first invented in nearby Middletown in the 1890s.

But to those who do not live or work in central Connecticut, steamed cheeseburgers are a tough sell. “It looks like a wet gray woolen sock on a bun,” wrote one columnist with the Worcester Telegram.

Even the Washington Post has taken potshots at the steamed cheeseburger. A drawing on its food page once depicted men in a steam room looking aghast at a burger that had had the nerve to join their company.

Yet in Meriden it’s the World Famous Ted’s Restaurant (like a steam Central Station) that leaves other burger vendors out in the cold. None of the famous chain restaurants evokes such loyalty and misty warmth as Ted’s.

“We have people who’ve been customers of ours for 35 years — since the first day we opened,” Paul Duberek, owner of Ted’s, told me during a two-steamed-cheeseburger lunch.

New customers, however, are not easily won over. “Word-of-mouth advertising does not work with this product,” Duberek said.

It’s not for lack of trying. Duberek often tells the story of one customer who toured the globe and posed for photographs before the world ‘s most popular tourist sites — the Great Wall of China, the Leaning Tower of Pisa, Red Square in Moscow, and the Parliament in London. In each photograph the globe-trotting steamed cheeseburger lover is wearing a satin jacket with “Ted’s Restaurant” printed in Palmer script on the back. A framed photo album of this odyssey hangs on a wall at Ted’s. ” I’m still waiting for tour buses from Russia and China to come here,” Duberek remarked.

A second steamed-cheeseburger missionary, Dale Greenbacker of Meriden, also told me of his hard luck when trying to preach the gospel of steam to a foreign audience. Greenbacker went so far as to earn a U.S. patent for a steamed-cheeseburger cooking cabinet called the Burg’R Tend’R. Yet few restaurant owners appreciated the beauty of a four napkin lunch.

“Most buyers were people with ties to Meriden. Others just didn’t believe me when I told them what I was selling,” Greenbacker said.

Even in Meriden, where five or six diners serve steamed cheeseburgers, eating the beloved sandwich is part mealtime treat and part initiation rite. One custom, observed by my friends and others who live in Meriden, is to take out-of-town visitors to Ted’s for their steam deflowering.

“It’s like getting a tattoo. It helps if you’re drunk the first time,” explained Bill Mazzucco, a Meriden resident who eats steamers with his two-year-old daughter at his side. Duberek, who has stood behind the counter at Ted’s for more than 20 years, says he never tires of this ritual.

“You can tell the newcomers because they look so nervous,” Duberek said. “But it’s amazing how many of them smile after the first bite.”