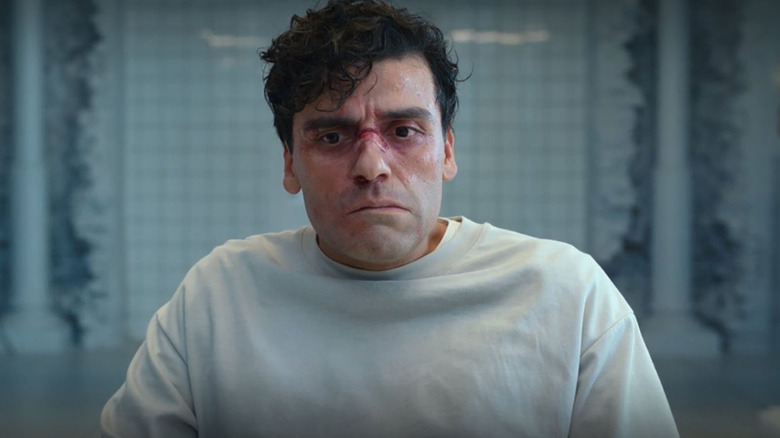 Explaining what it feels like to be institutionalized to someone who has never been there feels like trying to describe what it's like living in another universe. Perhaps that's why the fifth episode of "Moon Knight," titled "Asylum" was so easily incorporated into the vastly expansive world of the Marvel Cinematic Universe. Since the character's debut in 1975, Marc Spector/Moon Knight has been known for living with dissociative identity disorder (DID). There's a lot to be said and dissected regarding the representation of DID on "Moon Knight," but as someone who does not live with the condition and without extensive clinical knowledge of how DID operates, it would be disrespectful and dangerous to speak on whether or not "Moon Knight" gets it right. I am, however, someone who dissociates thanks to decades of traumatic events.

In "Asylum," we see Marc (Oscar Isaac) transported to a metaphysical version of Chicago's Putnam Mental Institution, where Dr. Harrow (Ethan Hawke) is desperately trying to convince him that he's not only a patient, but that everything we've seen in the previous four episodes has been completely manufactured in Marc's mind as a way to escape his traumatic reality. This episode tackles some unimaginably difficult hardships, but hearing Dr. Harrow discounting Marc's claims directly to his face immediately transported me back to my own history of dealing with doctors who are too busy pathologizing away what I knew to be true. At that moment, I fully dissociated into nothingness, only "coming back" to realize that based on the timestamp of the episode, I had lost 18 minutes. I didn't even get to hang out with Taweret because in my life, I am my own hippo goddess. 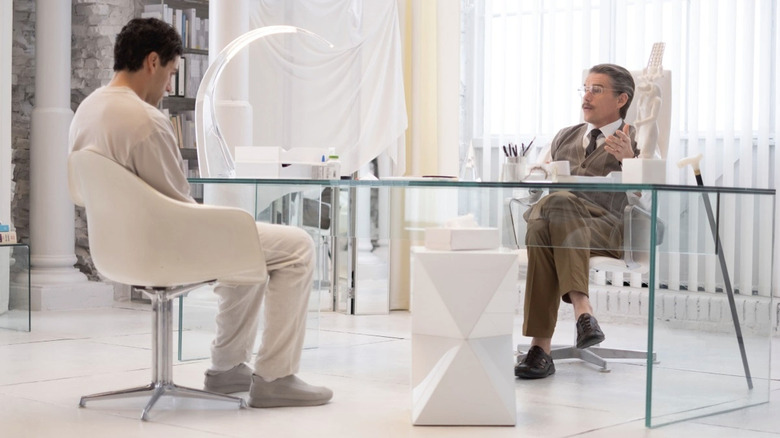 The metaphysical asylum exists because, spoiler alert, Marc Spector/Steven Grant died after having been shot by Arthur Harrow in the last episode. Taweret is here to guide them through the Duat (the Egyptian underworld), and because its true form cannot be processed by humans, his mind crafted the asylum as a stand-in. For someone like Marc/Steven, the brain associating the underworld with an asylum is spot-on. My own personal brand of purgatory would probably resemble the second institution I was sent to for a "grippy sock vacation" because mental institutions are the closest thing we'll ever have to hell on earth. Marc sadly starts to buy into Dr. Harrow's claim that this is nothing more than a mentally ill projection. If I had a dollar for every time someone who was supposed to care about me instead told me that it was "all in my head," I'd have enough money to pay off the student loan debt Biden refuses to cancel.

But Marc isn't making it up. He really is dead, and a door to the asylum transports Marc onto a ship traveling toward the Field of Reeds, the Egyptian afterlife which is shown as an idealized vision of one's life on earth. Unfortunately, when Taweret weighs the hearts of Marc and Steven against the feather of truth, they don't balance, and without a balanced scale, the two will not make it to the Field of Reeds and instead be trapped in the sandsea for all of eternity. The only way to balance the scales is to head back into the asylum and face the truth of their existences, literally fulfilling the Lynchian call to "fix your hearts or die."

Stare Hell In The Face 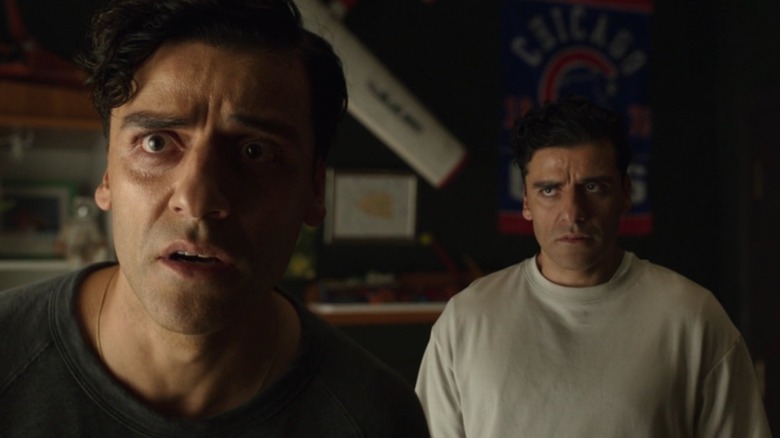 The majority of "Asylum" is f****** rough to watch, because Marc/Steven's truth is unbelievably painful. As with most people who disassociate, we learn that Marc Spector is the host/core, and that he developed the alter of Steven Grant as a means to survive his traumatic childhood. Not only do we watch as Marc must relive the deeply traumatic events of his youth, we watch Steven experience them for the first time, as the idyllic personality who was spared from all of this pain. The once adorable "laters gators'' catchphrase Steven has used throughout the series is actually a harbinger of emotional damage, revisiting a similar gut-punch felt when "Game of Thrones" fans finally learned the truth about "Hodor." Marc desperately tries to shield Steven from the truth, not only to keep him from having to witness what Marc knows to be true, but because Steven learning the truth forces Marc to have to face it as well.

Marc's little brother died in a tragic accident of which his mother never properly grieved and instead projected onto Marc. She blamed him for Randall's (aka "RoRo") passing, and abused him so severely that it motivated Marc to disassociate into Steven Grant, inspired by a character from the "Tomb Buster" adventure series Marc watched with his brother. Steven realizes that this means he is "not real," and that the existence he'd been enjoying is not in line with the realm of possibility. Asylums are hell not just because of the clinical setting, the mistreatment, and the dehumanizing stigma attached to it. Asylums are hell because when you're trapped with nothing but your thoughts, you're forced to stare hell in the face–the hell of existence, the hell of memory ... the hell that can only be experienced by you. 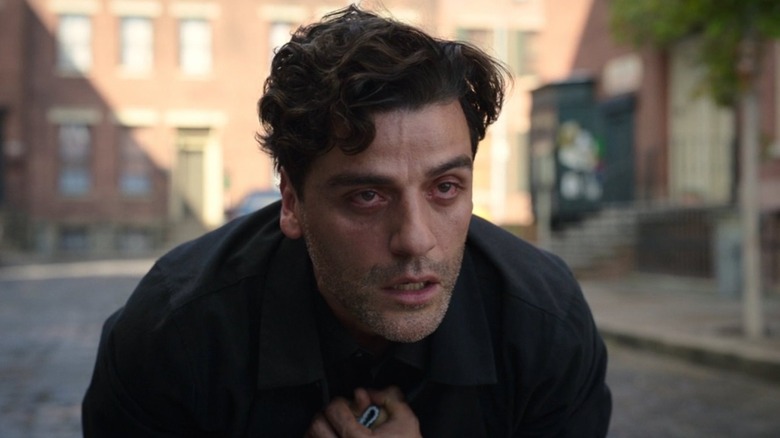 With Steven knowing the truth, Marc is finally able to begin his own healing process. Steven tells Marc that RoRo's death is not his fault, and he offers him the space to feel what he feels, and a bit of comfort. We're looking at two separate entities of Marc/Steven played by Oscar Isaac, but it's clear that this is meant to represent Marc beginning to forgive himself. Unfortunately, the scales on the boat are still not balanced and the undead come for them both. Tragically, Steven falls into the sandsea and becomes frozen in place. Steven is gone, and suddenly, the scales have balanced. Marc is then transported to the Field of Reeds. Alone. As if to imply that Marc was only able to crossover if he stopped relying on Steven to spare him from his life's traumas. (Again, this is why scripted interpretations of DID can be morally complicated because that's not how DID works.)

Clunky interpretation of a legitimate mental disorder aside, there's something incredibly poetic and healing about the way this episode ended. I've had numerous doctors, friends, colleagues, and loved ones all tell me time and time again that the things I've endured are "not my fault," but that doesn't change what I perceive to be my reality. It's only when I do the painstakingly difficult work of processing what I've been through, acknowledging it as real, and accepting it as reality that I can actually work on repairing harm. Putting in the work SUCKS. Life is infinitely easier when I avoid acknowledging the truth of what I've been through, but avoiding something doesn't make it go away ... it makes it manifest in other forms. For Marc, that form is Steven Grant (Again, not an accurate assessment of DID). For the rest of us, we'll have to unlock the asylums in our own minds to see what we need to do to balance our scales, even if it hurts, because we all deserve our own Field of Reeds.

Read this next: The 15 Best Batman Comics You Need To Read

The post Moon Knight's Depiction of Mental Illness and Healing is Spot-On (Except When It's Not) appeared first on /Film.