Kengo Kuma designs his first ever trainer for Asics 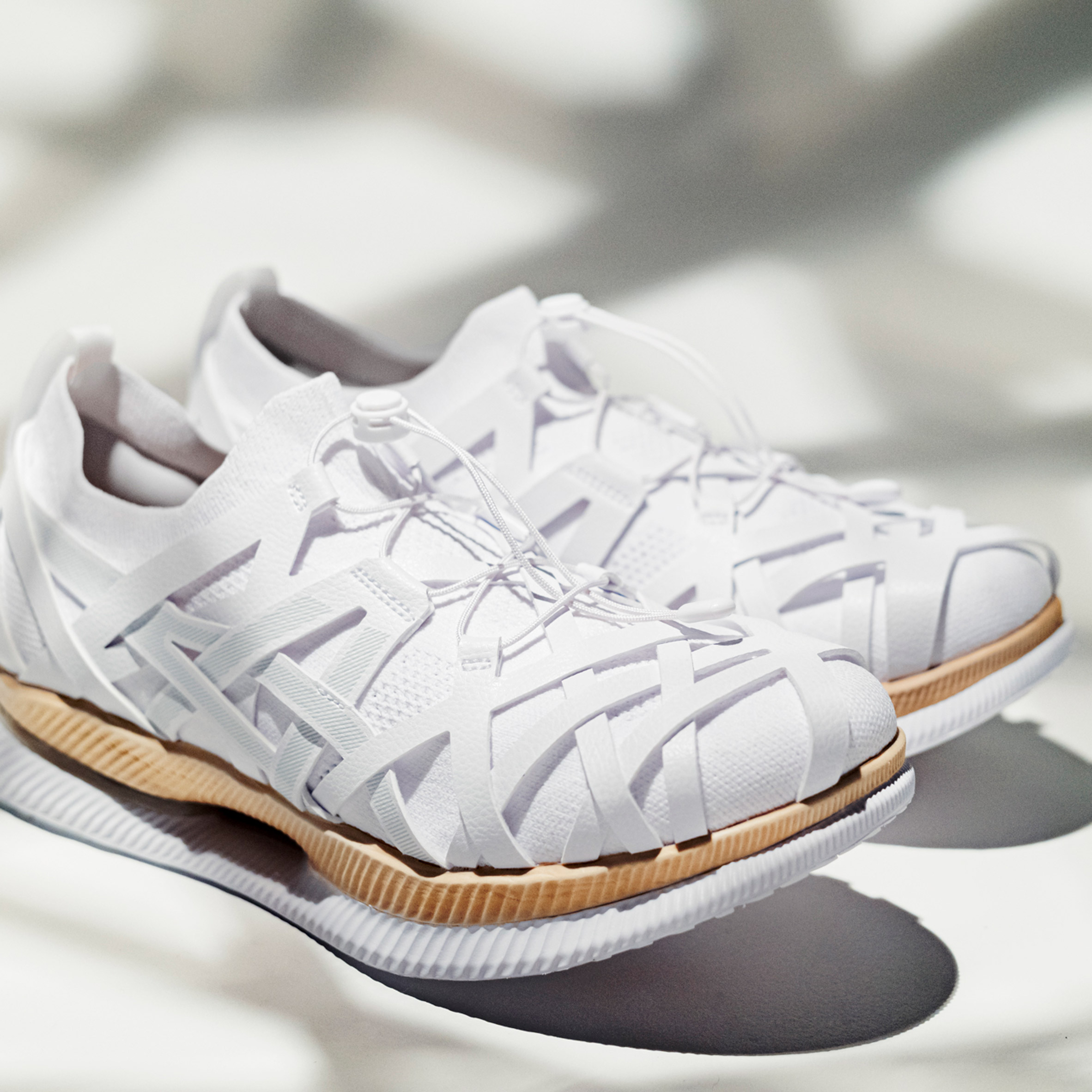 For his first footwear design, architect Kengo Kuma has created a trainer in collaboration with Japanese sports brand Asics that draws on the craft of bamboo knitting.

The shoe's upper consists of a slip-on mono-sock, overlaid with a criss-crossing pattern of clean, white strips.

It mimics the way that a supple material like bamboo is interlocked in the traditional technique of bamboo knitting or yatara ami to create a solid structure. 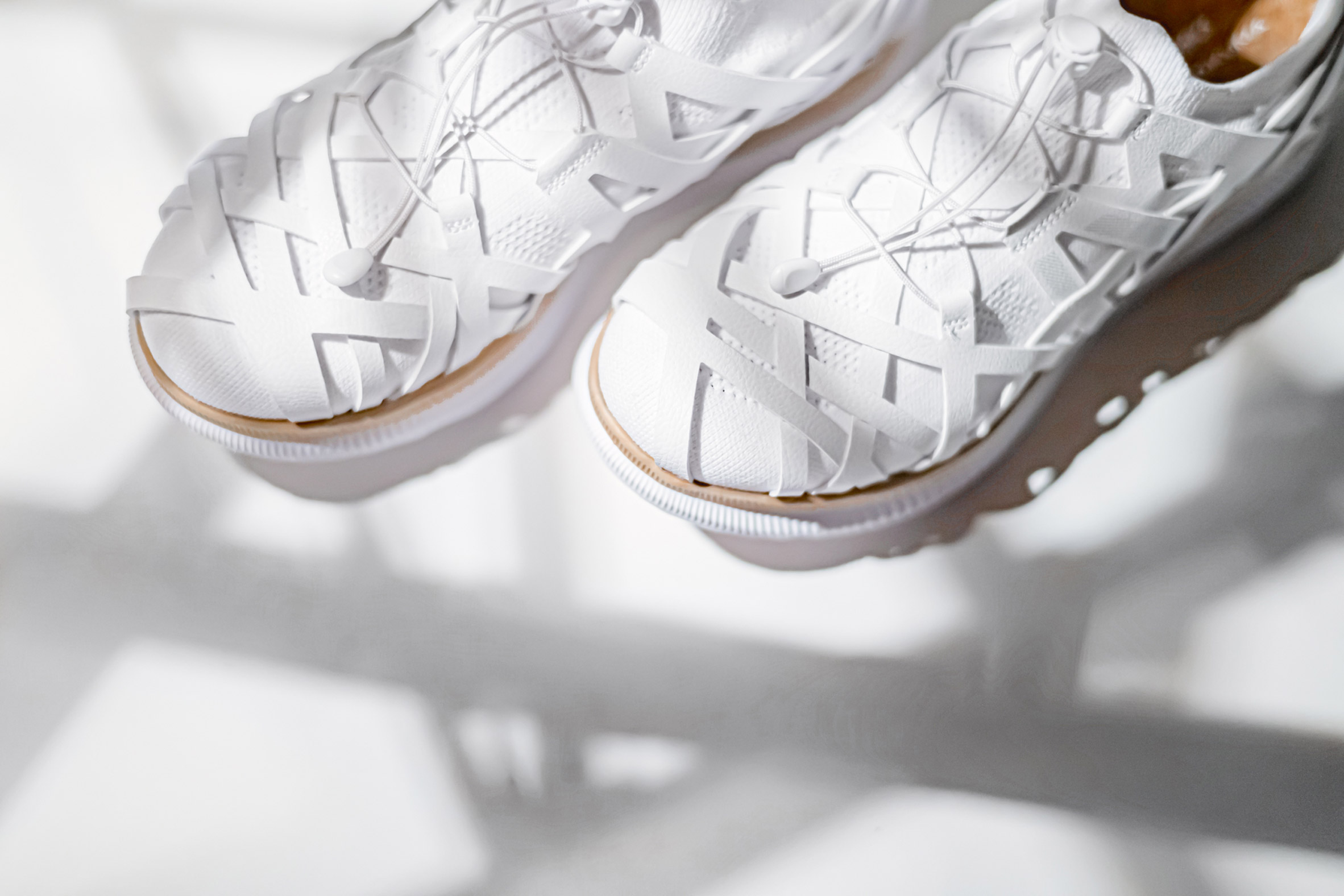 Made from recycled polyester, the lines are placed strategically to stabilise the foot, while also converging to form the Asics logo on the sides of the shoe.

"Originally, Japanese culture was based on 'connecting lines'," said Kuma. "A single line is weak, but bundle of lines in aggregate is strong. An approach to yatara ami combining delicacy and functionality works well with modern designs." The shoe is named the Metaride AMU, based on Asics' classic Metaride shape which curves up towards the toes to prevent excessive bending of the ankles and reduce energy consumption.

A tan midsole breaks up the otherwise monochromatic shoe its colour derived from the natural fibres the material is made with. These are usually dyed, but were left uncoloured at Kuma's request. 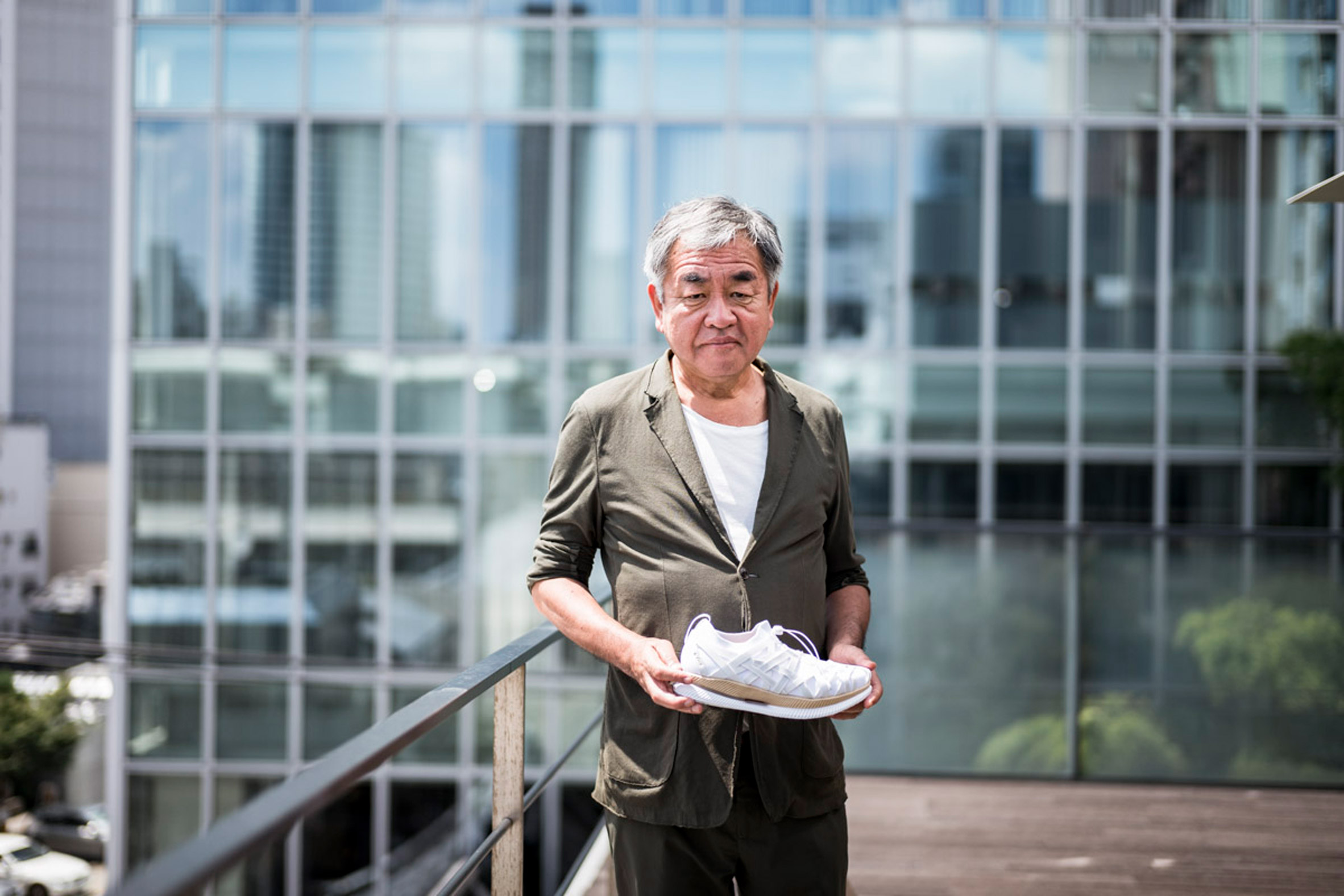 "I was captivated by the fact that cellulose nanofibres are used in the midsole foam," he explained.

"This is a fibre material derived from wood. It was a great approach this material combines the contradictory functions of superior cushioning and durability."

In this way, it imitates bamboo's ability to be both hard and soft at the same time. 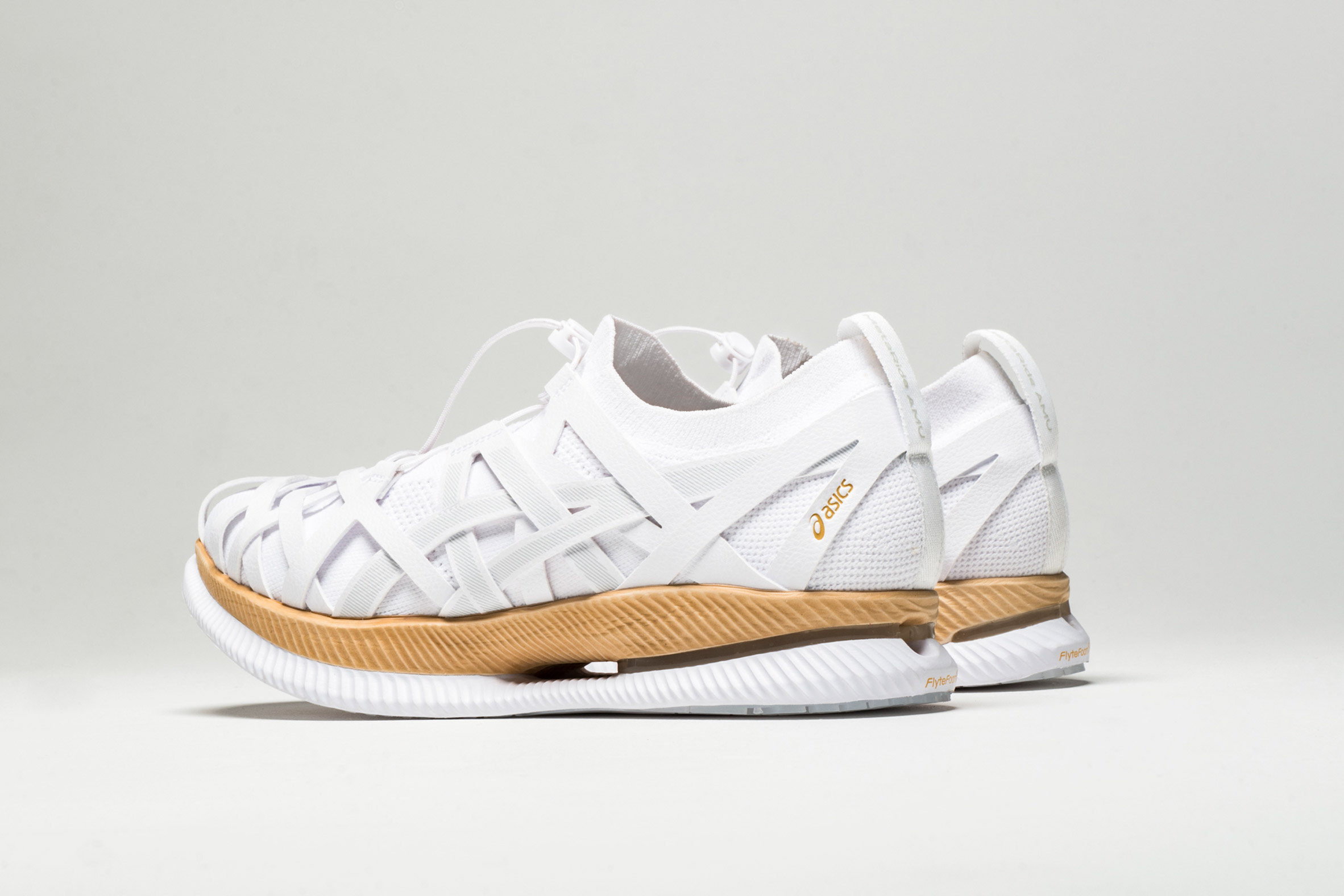 For Kuma, switching from architecture to footwear design was not as big a leap as it might first appear.

"When we design a building, we work while analysing how people move and feel. It is no different from ergonomically designed shoes," he explained.

"One of the major themes in my architecture is how people and the earth connect. For me, I feel uncomfortable when people are separated from the earth by architecture, and I think people remember their peace of mind when they connect with the earth. In terms of that connection, I felt sneakers had more possibilities than architecture." 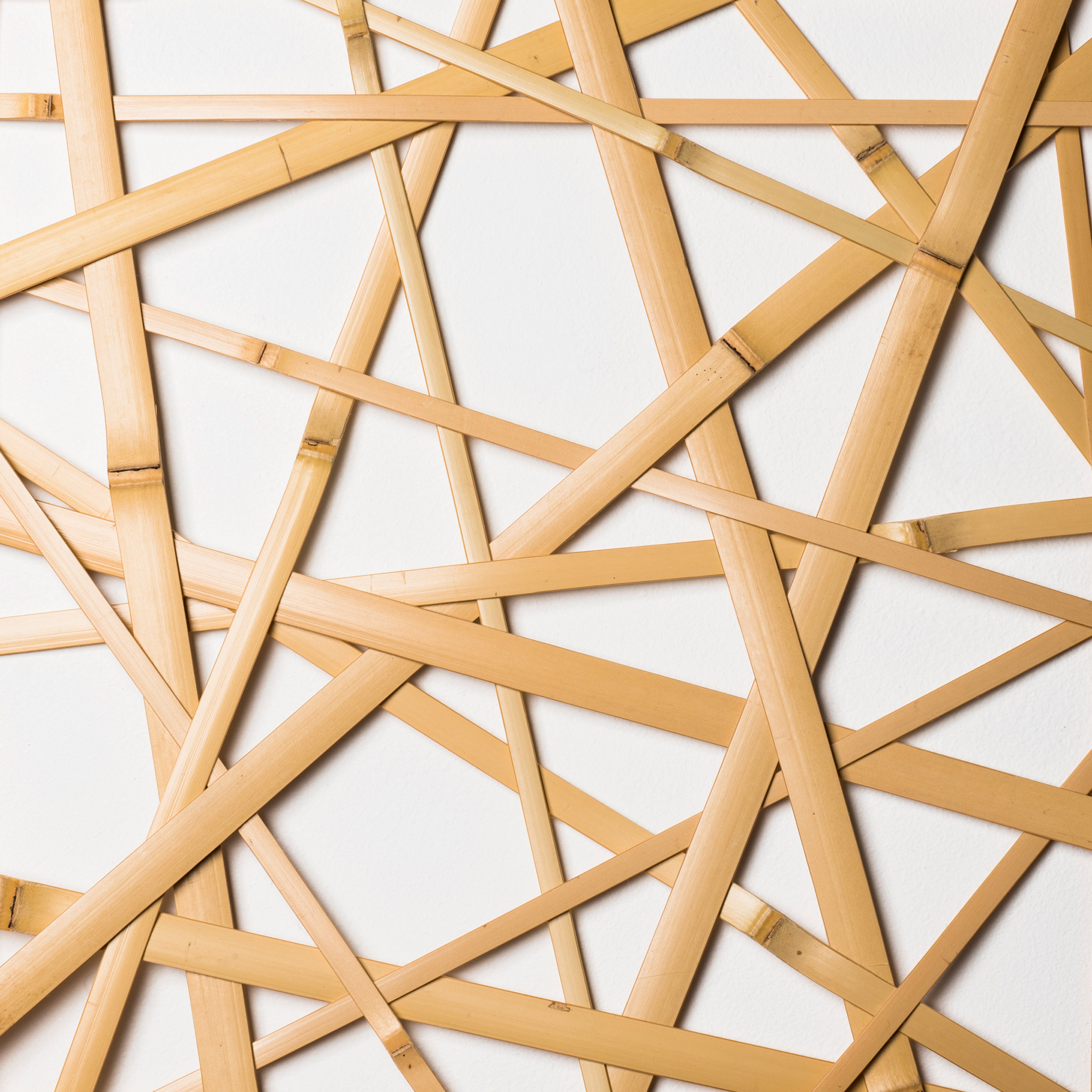 Kuma who is well-known for designing the V&A Dundee and Japan's National Stadium for the upcoming 2020 Olympic and Paralympic Games has had a long-standing fascination with bamboo as a material.

Most recently he weaved it together with carbon fibre for an installation during the London Design Festival.

The post Kengo Kuma designs his first ever trainer for Asics appeared first on Dezeen.