Ivana Got Alimony. Donald Got Publicity.

The funeral for the first wife of former President Donald Trump, Ivana, took place on a hot July day at St. Vincent Ferrer Roman Catholic Church on Manhattan’s Upper East Side, not far from the townhouse where she died at the age of 73. Her golden casket sat next to a large poster board of her 1992 Vanity Fair cover, which read Ivana Be a Star! The story, by Bob Colacello, chronicled the junketing and jet-setting that went along with Ivana’s effort to reinvent herself after her 1990 divorce from Donald.

Although, at the time of her death, Ivana had been out of the public eye for years, she had helped make Donald, as the editor who put her on that magazine cover told me.

“I do think Ivana was hugely important to Donald Trump’s rise—she domesticated the beast socially,” said Tina Brown (who left Vanity Fair to become editor of The New Yorker shortly afterward). “Before and after her, you never saw Trump at any top gathering or cultural opening. She brought him into circles he had ogled from outside and created a glamour aura.”

Ivana may have succeeded in gaining the couple access to more exclusive echelons of Manhattan society, but above all, their parting, not their pairing, was what transformed them into prominent characters in the 1990s’ new culture of tabloid-gossip-driven celebrity. I was only 12 in 1990, but even a middle schooler could not have been innocent of the Trumps’ divorce.

Over breakfast, my stepfather and I would take turns reading the New York Post and the Daily News. Then I would walk to school. Every morning, on Lexington Avenue, I would pass a fancy sock store that featured elaborate, animated window displays of the latest episode in the divorce, sometimes with blown-up copies of a front page from one of the tabloids. I remember one day an enormous, moving mechanical check with Ivana’s name on it.

Donald gave away a lot in the divorce—precipitated, after all, by his highly publicized affair with Marla Maples. Ivana’s divorce lawyer was Michael Kennedy, a crusading attorney (and friend of my parents) known for representing members of the Weather Underground and the United Farm Workers. With his help, Ivana got: $14 million for herself; $650,000 a year in alimony and child support to raise Donald Jr., Ivanka, and Eric; a mansion in Greenwich, Connecticut; and an apartment on the Upper East Side.

But what Donald got from the divorce from Ivana was a realization that making a shameless spectacle of yourself could be boffo. As his biographer, the journalist Tim O’Brien, told me: “The lesson Trump drew from it was that he could endure a grotesque personal debacle, which he set in motion by his cheating on Ivana, and come out the other side even more an object of interest than he was before.”

The headlines that the divorce generated made the gauche Trump brand gold-plated. The spectacle of their marital disintegration was a kind of lurid but victimless crime, involving two people who fed off the media attention while dragging each other through Page Six. “The Trumps were just another bloated float in the ’80s parade of showy New York money-grubbers,” Tina Brown’s successor as Vanity Fair editor, Graydon Carter, told me. “Their divorce—fought more in the pages of the Post and the News than in the courts—elevated them to grand-marshal status.”

[Read: What kind of man is Donald Trump?]

“All the weaponry he built up in his arsenal was finally used in his media war with his wife,” said O’Brien. “He had the New York Post gossip columnist Cindy Adams and she had the Daily News gossip columnist Liz Smith, and both of those writers ingested what the Trumps were telling them, and you went to each tabloid to know how to think about them. That divorce became a touchstone … for how society thought about celebrity, fame, and marriage in the New York of the 1990s.”

The divorce was a gift that kept on giving to headline writers, but perhaps the most famous one of all was the Post’s “Best Sex I’ve Ever Had.” The author of the accompanying article, Jill Brooke, later disclosed in an article for The Hollywood Reporter that the splash was born of Donald’s frustration that Ivana was getting more and better coverage than he was, so he planted the story himself by calling the Post’s then-editor, Jerry Nachman, and telling him, “I want a front-page story tomorrow.” In her report on the warring couple for the September 1990 issue of Vanity Fair, Marie Brenner quoted an unnamed journalist exclaiming, “Goddamn it … we created him! We bought his bullshit! He was always a phony, and we filled our papers with him!”

“I’ve never known anybody who is as dependent on attention as he is,” the writer Kurt Andersen told me. “But to me, it is in his case a jones like I’ve never seen. His obsession with fame is truly pathological. It’s not figurative; it’s not a metaphoric addiction. He had a real addiction.” Andersen, along with Carter, was a co-founder of the satirical magazine Spy, which famously traded on mocking Donald. But it was a two-way trade.

“Of course, Donald Trump was a natural character, a natural target. He was made for us,” said Andersen. “Trump loved the attention we gave him. Sometimes people accuse us of making him famous. But we were trying to kill baby Hitler.”

The divorce taught Donald the value of negative attention. Whether people felt disgust, envy, or indignation toward him, the outrage only burnished his brand. That instinct for manipulating bad publicity and turning an audience’s negative emotions into mass entertainment and media spectacle never left him. That was what his 2016 presidential-campaign announcement on the golden escalator in Trump Tower was all about: Insulting Mexicans as drug-running “rapists” was simply a way of holding the stage as a supervillain. As he learned from his uber-brag about the sex he had with Marla when he was cheating on Ivana, our media culture loves an antihero.

Ivana died alone, after an accidental fall in her home. Meanwhile, her ex-husband is seemingly preparing for another presidential run, surrounded by sycophants and enablers, and still the center of the attention he craves and courts. What he learned from divorcing Ivana, he told us again in 2016: When you’re a star, they let you do it. 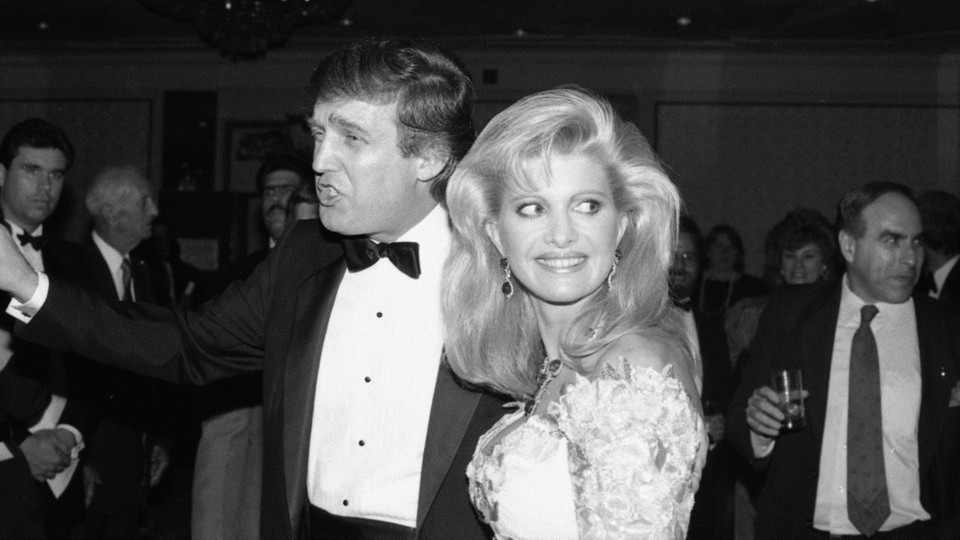