Is It Nine or Ten? 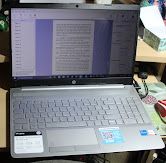 How many times have I read my novel manuscript? I know that I had eight official rewrites so do these last two read-throughs count as one each or can I lump them together. I'm lumping them because I changed verb tenses, added commas, and changed a few words each time but made no major changes except for renumbering the chapters. One of these days I'll decide that it's done done and get the thing published on Amazon Kindle. Eek, that's scary.

The daily art page for today showed four empty hangers and invited you to draw clothes on them. So I did.

The next figure in the 15-Minute Artist book was a jellyfish which was surprisingly puzzling to draw. I had a hard time with the parts that dangle down from the center of the bell. I forget what they're called. but they look like ribbons and were tricky to draw.

Then I pulled out one of my new drawing books, 10 Step Drawing: Nature, to draw the next figure which was a sprig of borage, an herb. I liked drawing and coloring it. I'm really liking colored pencils these days.

After supper I finished the Ends cast sock. I hoped that I'd run out of yarn when I ran out of sock but, of course, there's a little, walnut-sized ball of yarn left. Yarn and patterns is like hot dogs and buns. Hot dogs come in packages of 10 but buns come in packages of 8. There's always something left over. It can be very frustrating. 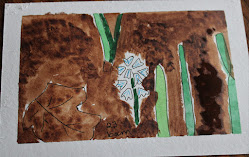 Watercolor no. 23 is of a tiny squill in front of my house. It's only about two inches tall but I think it's charming. And since the bunny came by and ate all of the remaining crocus flowers and leaves, it's all that's blooming out there. Rotten rabbits.

Today's toss was the last Find It game that will be tossed. Unless, of course, OJ comes over and rescues them from the box which he has been known to do to items that I put in there.

I got a haircut this morning and then drove to the polling place to cast my first in-person ballot in 2 years. Naturally there was an accident on the highway which really slowed traffic but everyone was behaving and traffic kept moving, mostly. I just realized that they didn't tell me what number voter I was. I should have asked.

It looks like it's going to be rainy next week when I'm at The Clearing so I'll be sure to pack my waterproof coat and mud shoes. Six more days! I'm making a packing list.