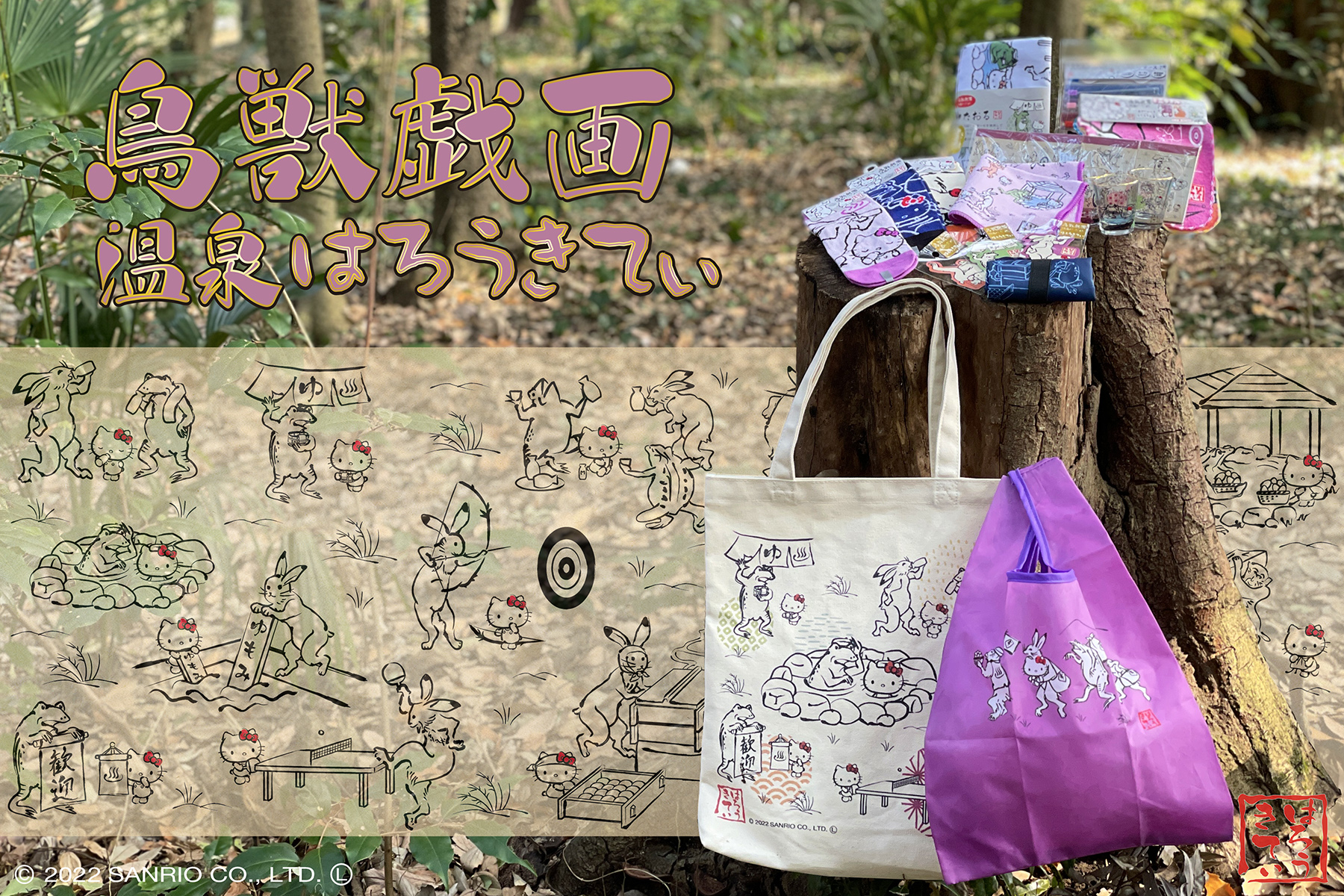 Did you know that some people believe that manga has been around for hundreds of years? The Scrolls of Frolicking Animals and Scrolls of Frolicking Animals and Humans, a set of four picture scrolls that are believed by some to be the first manga made in Japan, is estimated to date from the 12th and 13th centuries. The scrolls depict anthropomorphic animals like rabbits, monkeys, and frogs doing human things like bathing, wrestling, and going to ceremonies. They’re considered classic works of medieval Japanese art.

And now, Hello Kitty has joined the animals in a new line of accessories by character goods producer Asunarosya!

Based on the scroll known as the Koukan, which depicts the animals enjoying themselves to their hearts’ content, these new goods feature Hello Kitty alongside frogs, rabbits, and monkeys enjoying games and hot springs. Altogether there are 10 different kinds of accessories, starting with a set of three brightly-colored mini-towels, which are 160 by 160 millimeters (6.3 by 6.3 inches) (550 yen [US$4.76]). They show Hello Kitty trying archery with a rabbit, carrying baskets of eggs to be cooked in hot springs with a frog, and playing ping pong with a monkey. 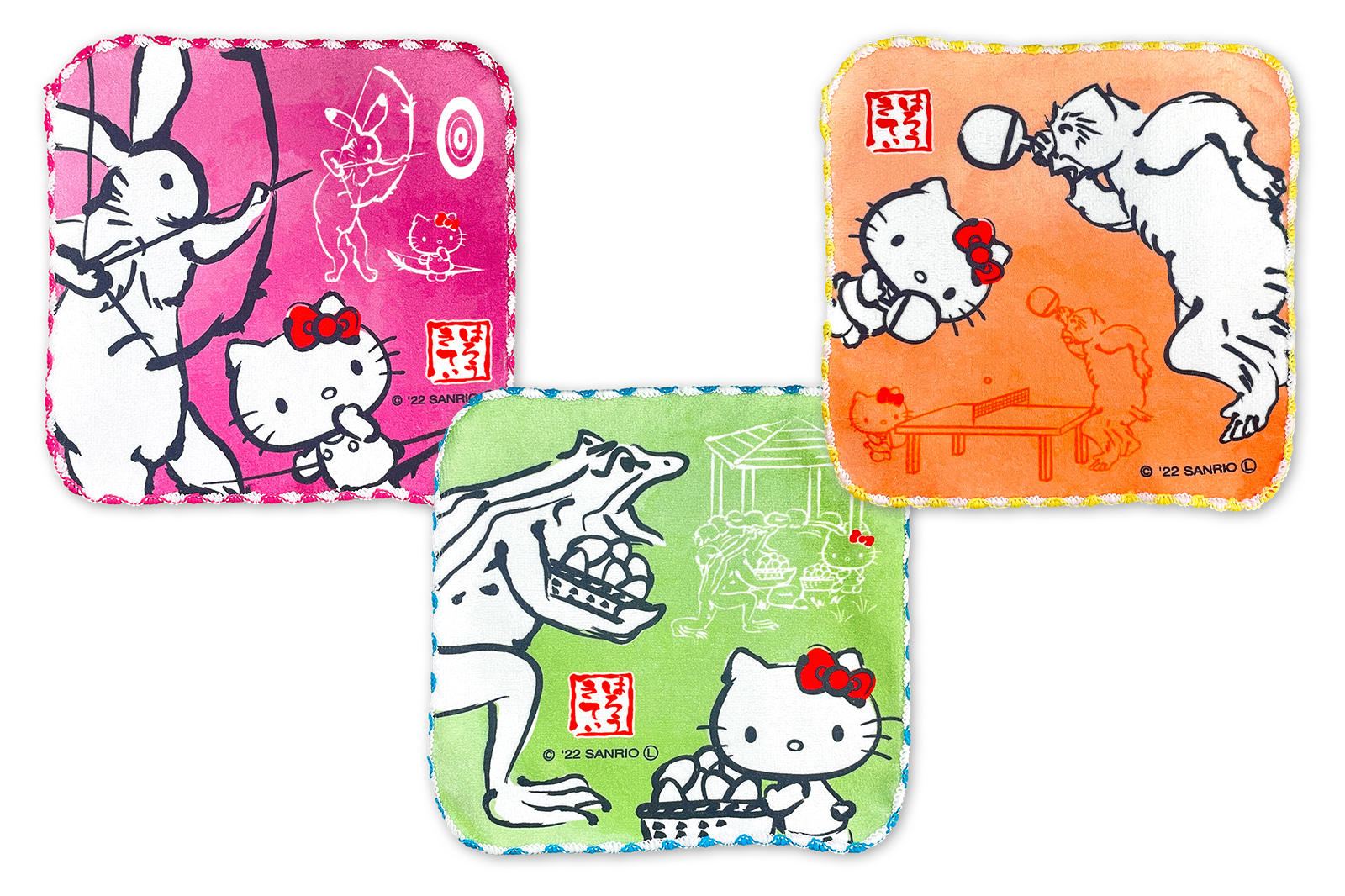 A larger Japanese-style towel (880 yen), which is 340 by 730 millimeters (12.6 by 28.7 inches), depicts all these scenes and more. Its minimalist design, which uses just three colors sparingly on an all-white background, give it a really classical feel. You would never notice Hello Kitty is there without looking closely! 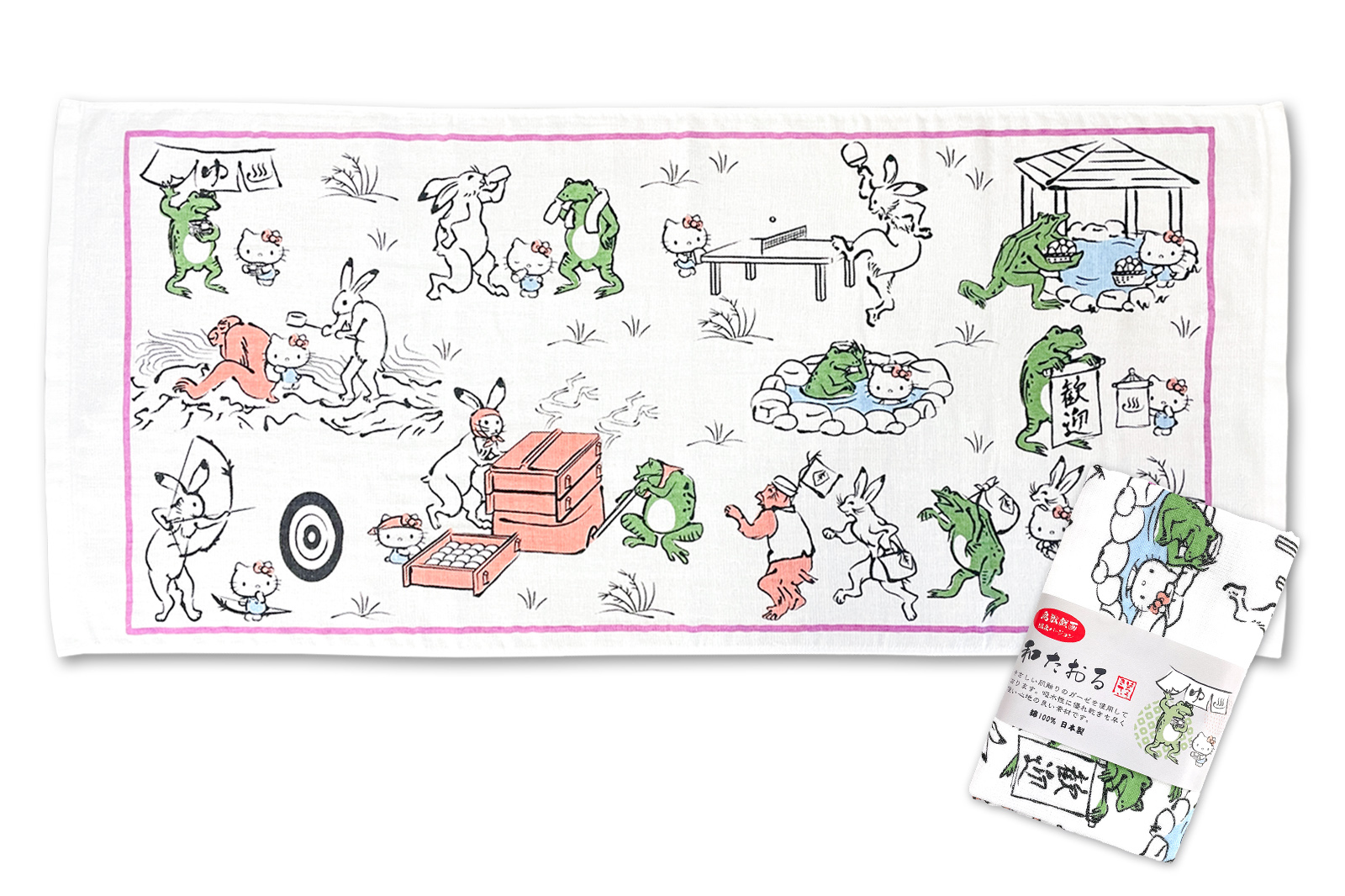 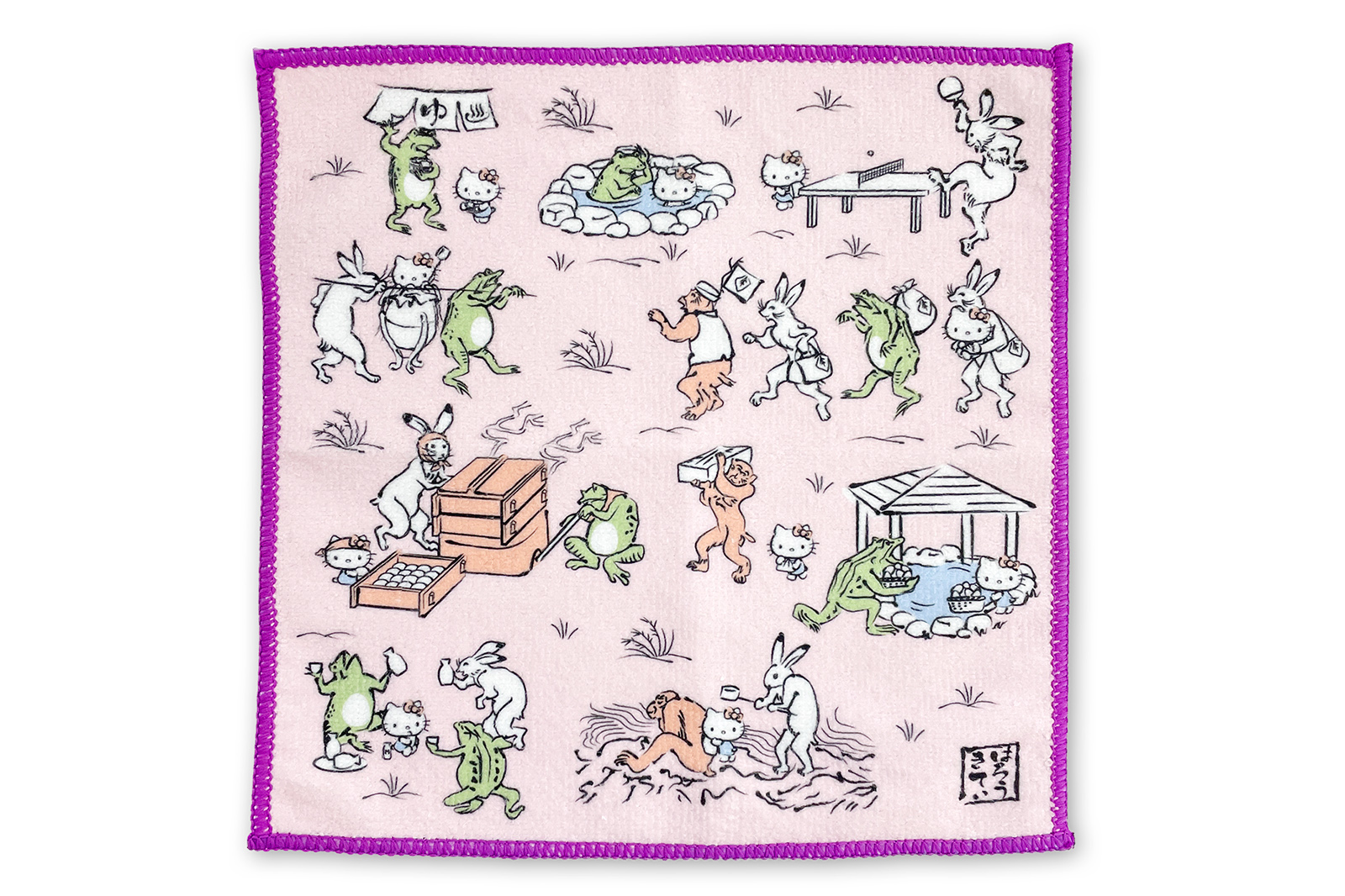 A four-pack of memo pads (495 yen) shows the whole scene on the back when lined up together, like a horizontal scroll. Each memo pad also has a different paper design, with four different color schemes. 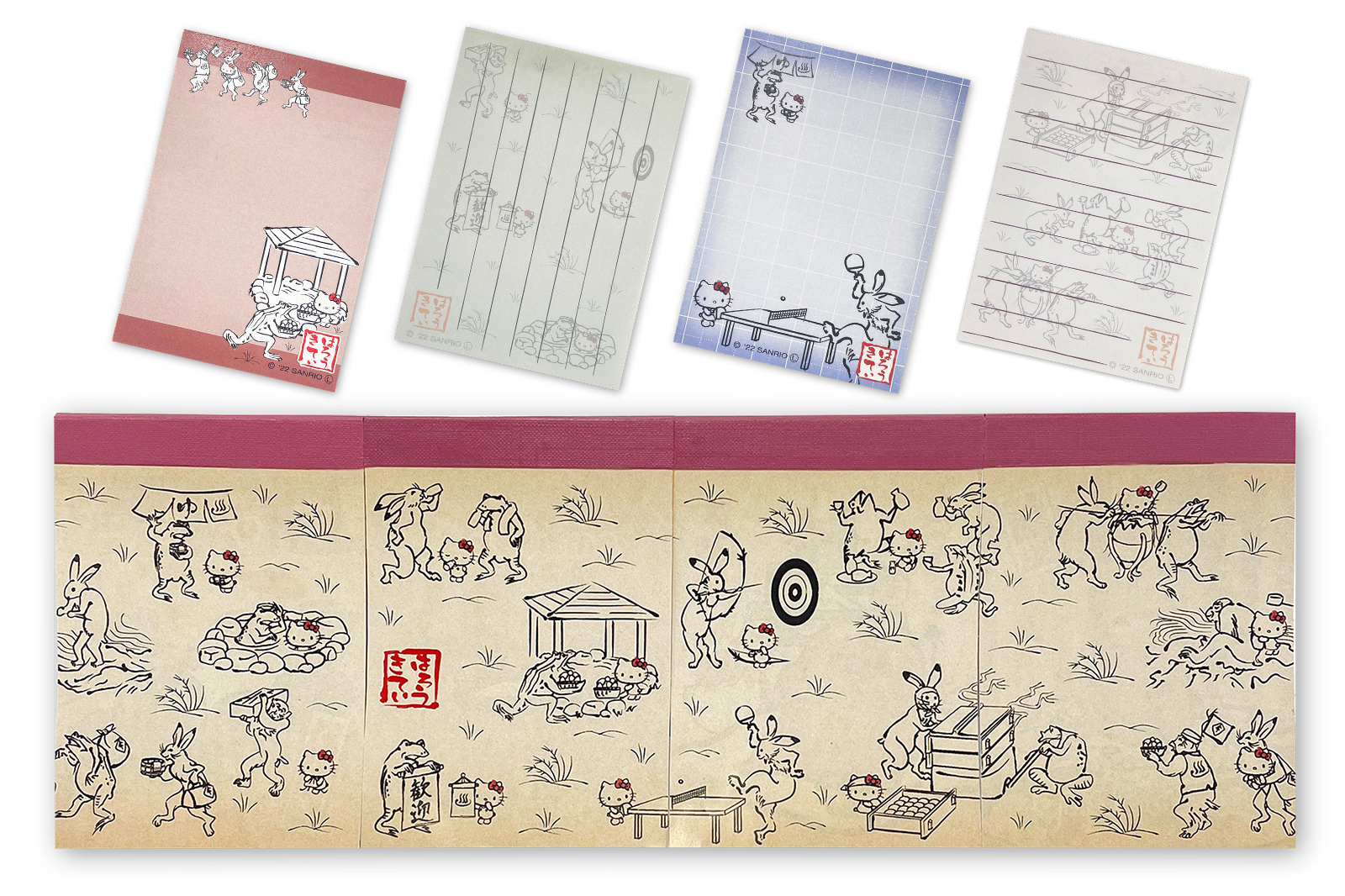 For a more summery feel, there’s a set of three shot glasses (550 yen) depicting Hello Kitty and her Frolicking Animal friends doing all sorts of activities, like bathing and steaming meat buns, overlaid on colorful patterns that look almost like firework bursts. Each glass features either the frog, the rabbit, or the monkey together with Hello Kitty. 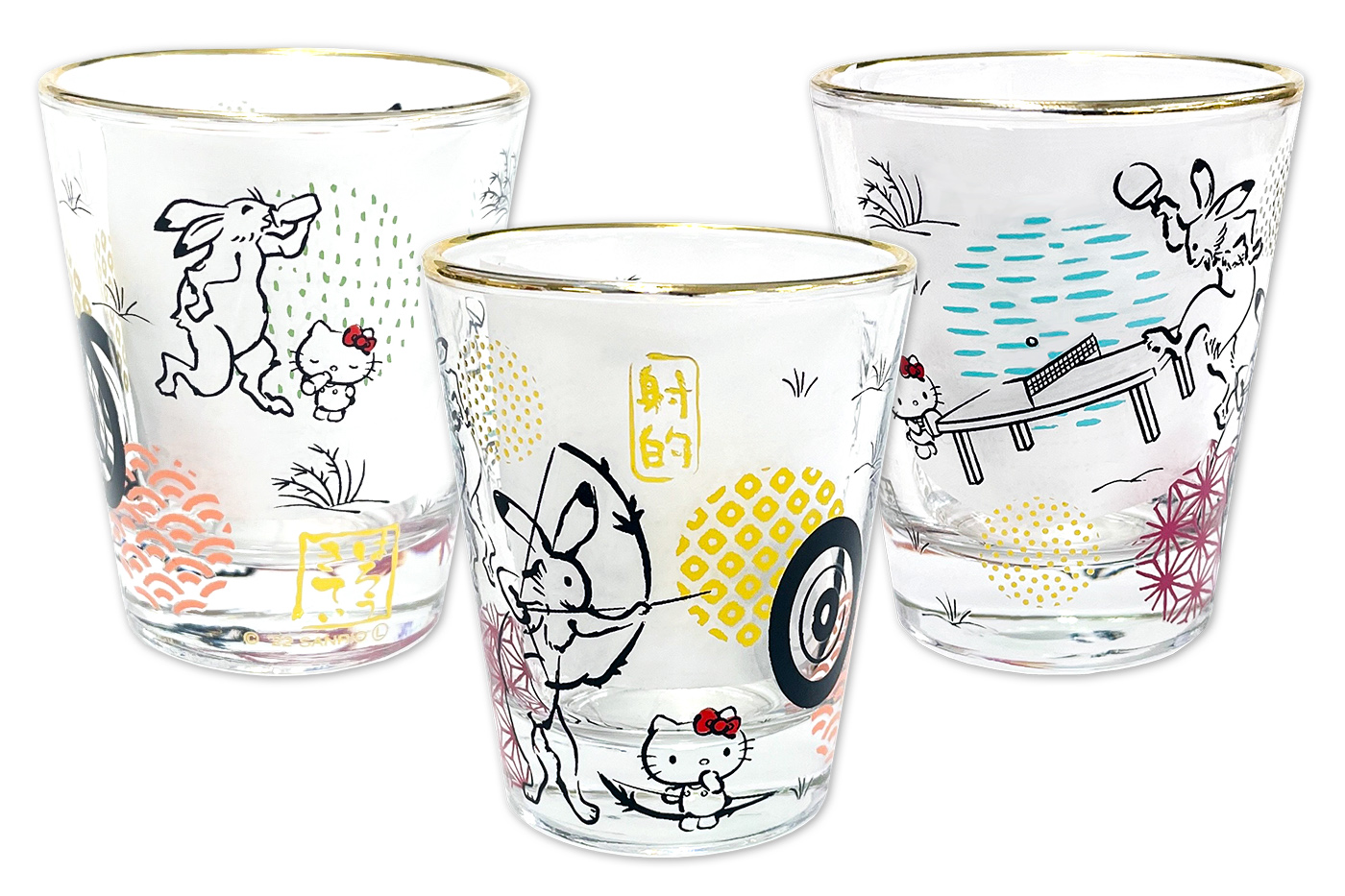 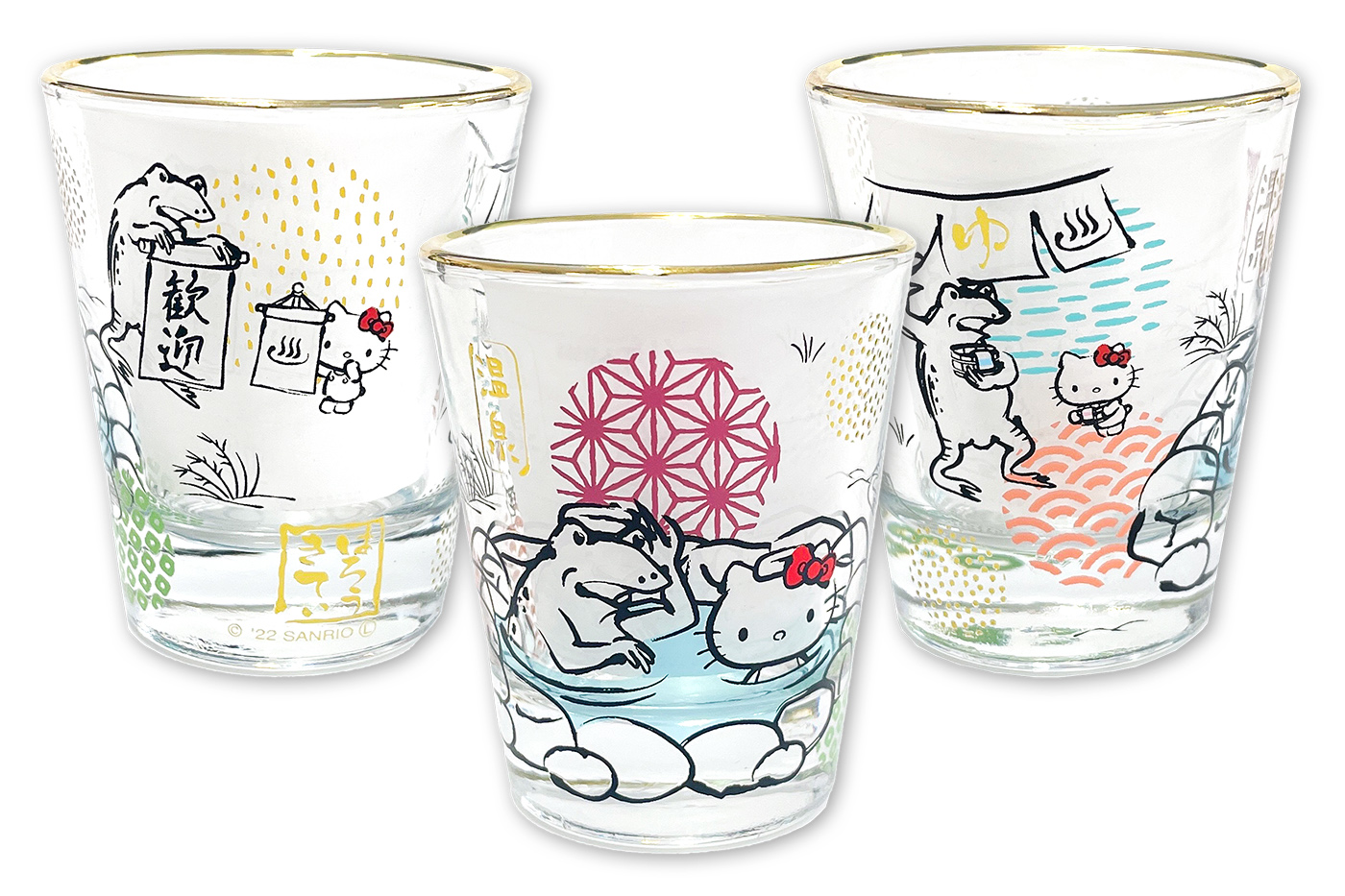 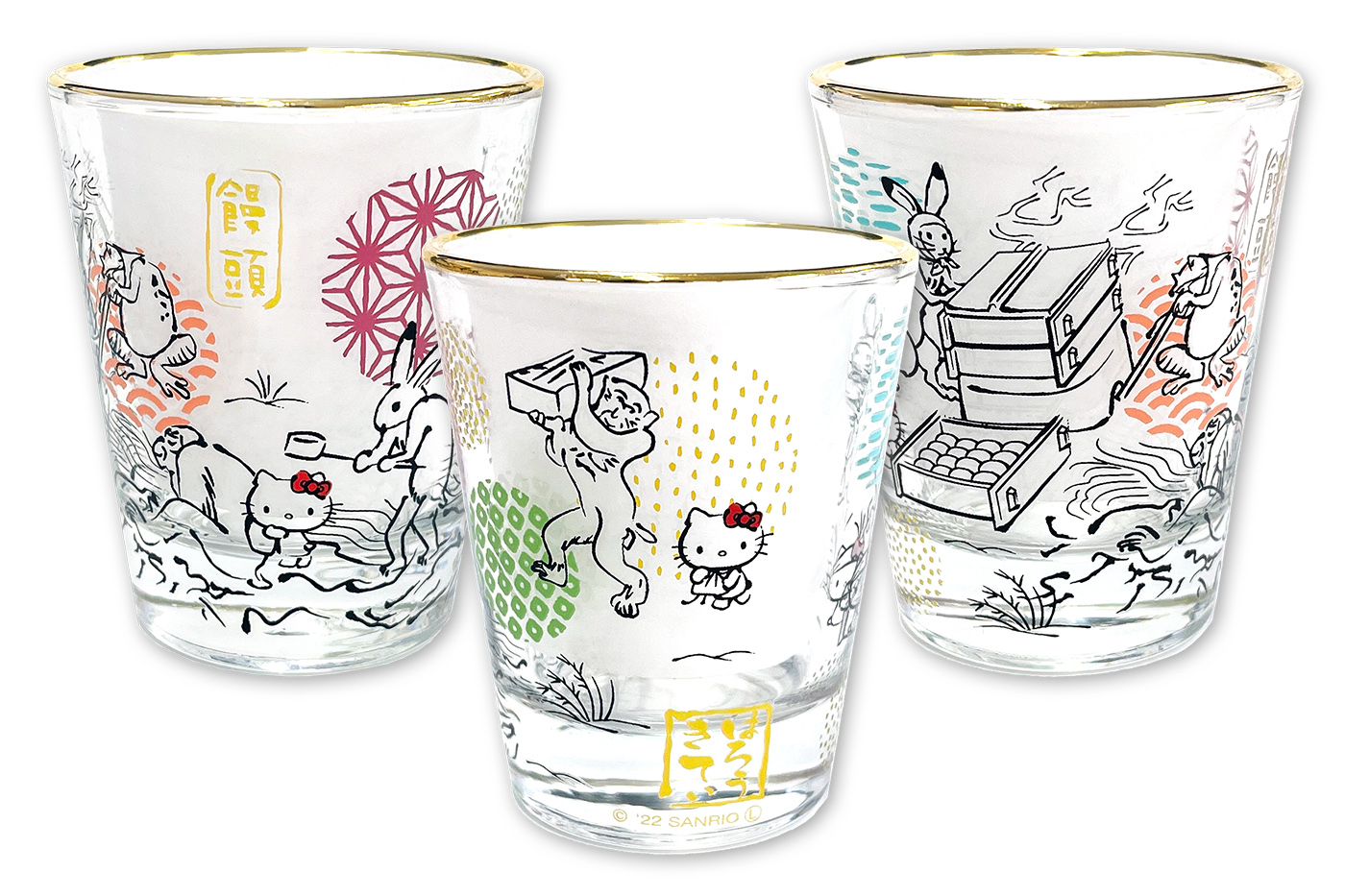 Decorate your favorite things with one of these three cute stickers (385 yen each), which depict Hello Kitty and a rabbit having a cold drink after a bath, Hello Kitty and a frog coming out of a bathhouse, and Hello Kitty helping a monkey wash its back. 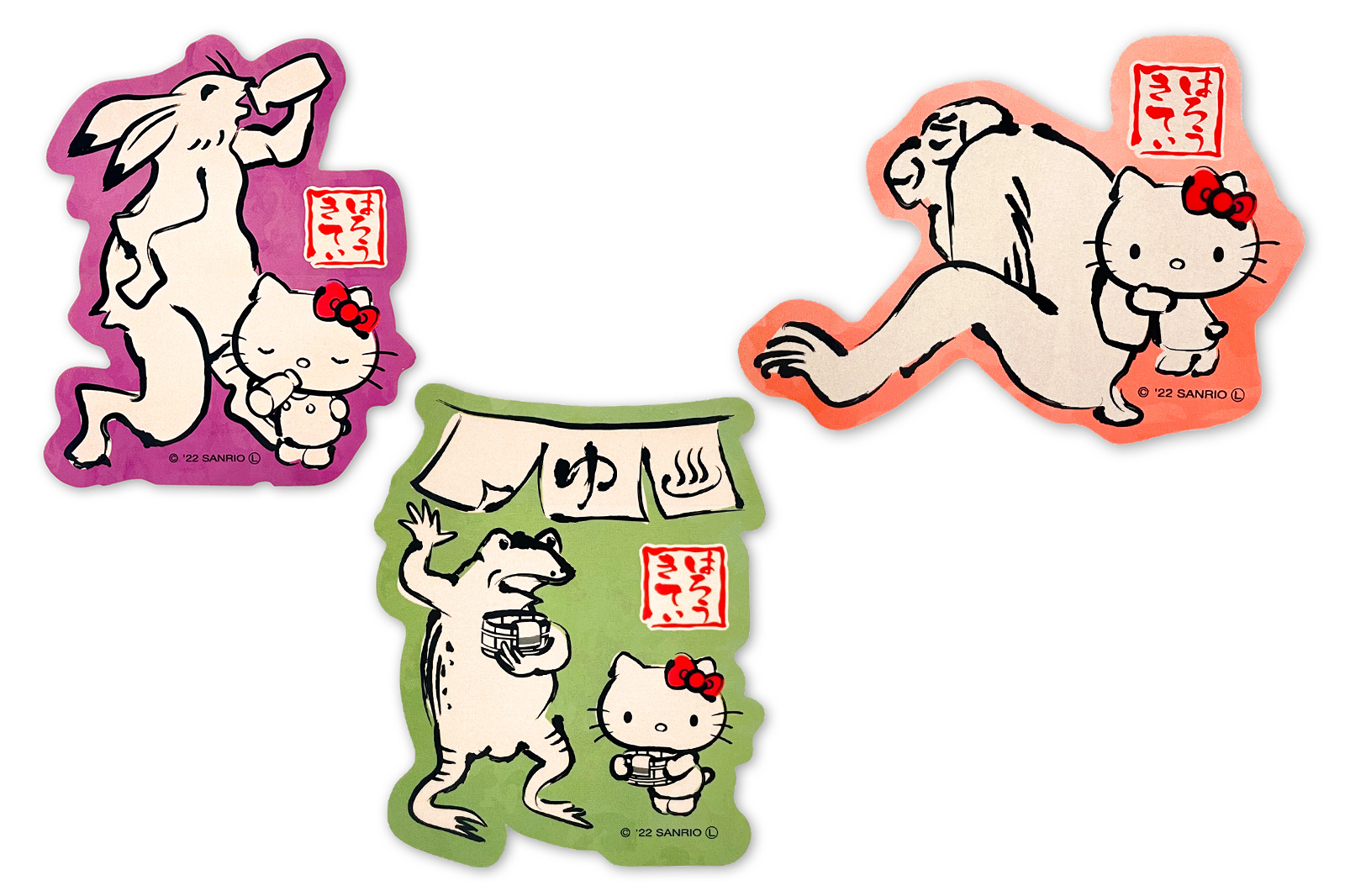 These plastic zip-up pouches (550 yen) are great for carrying everyday items in your bag or for travel. They come in a pack of four, each with different colors and designs. They’re also double-sided! 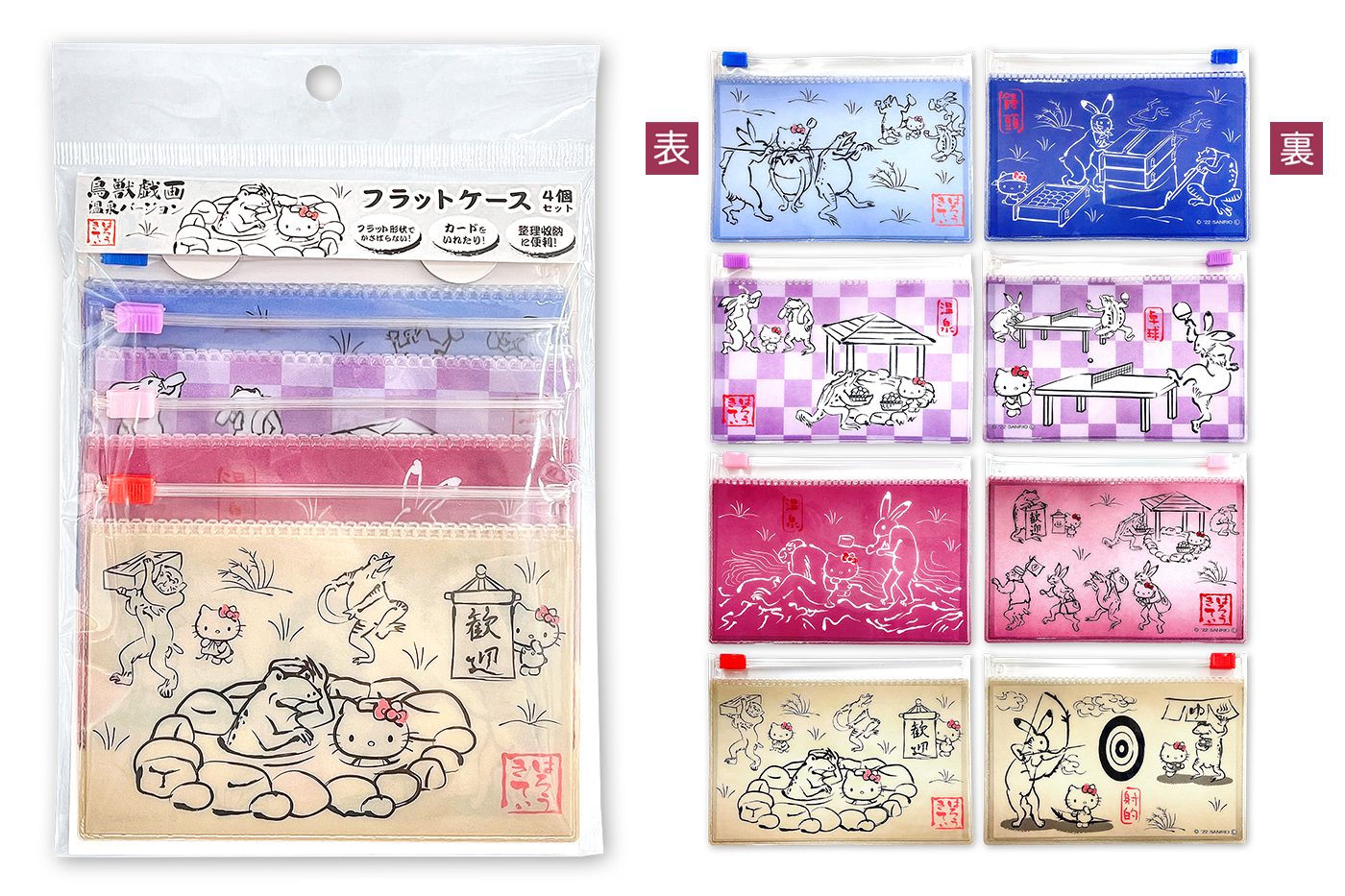 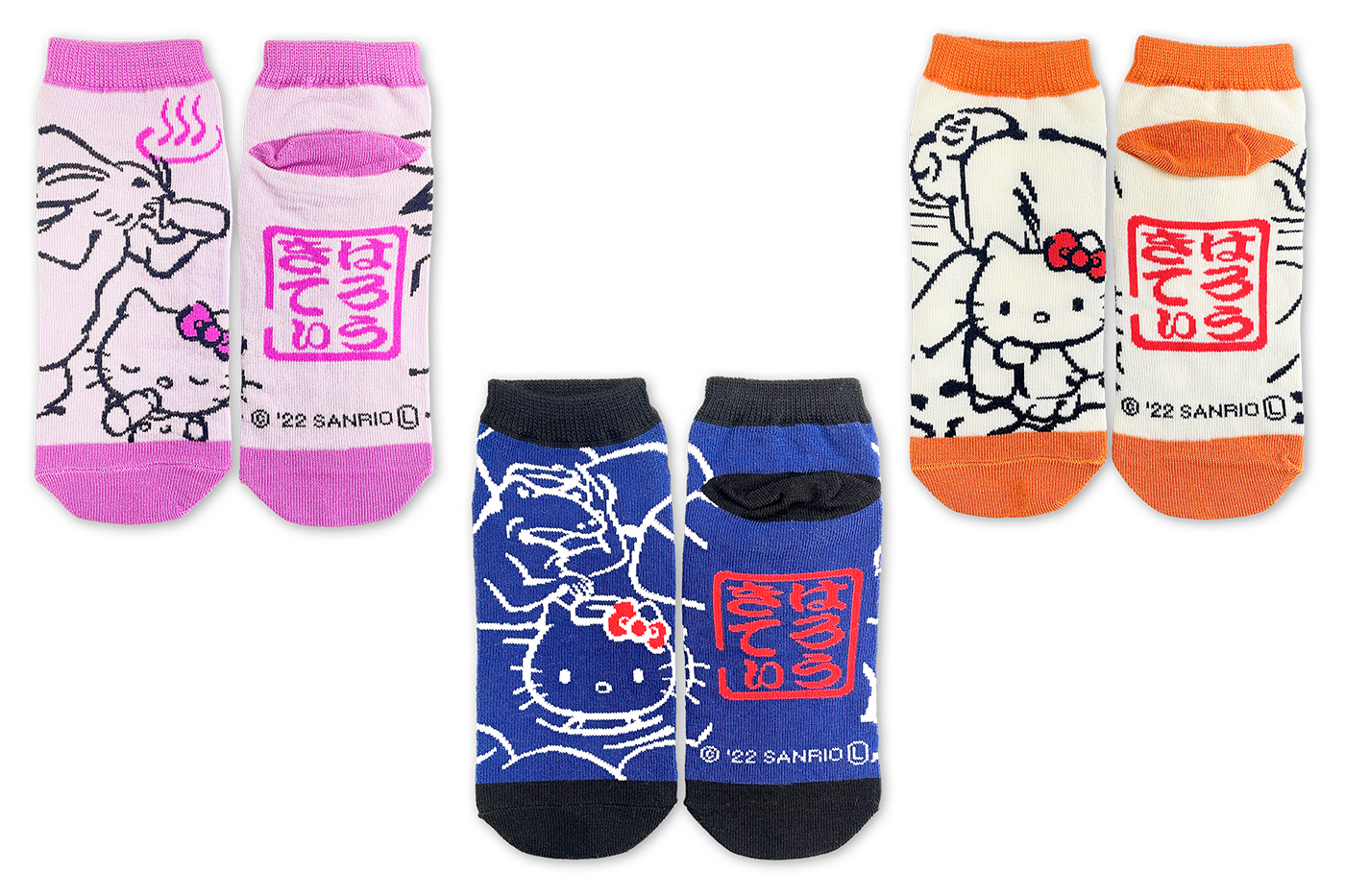 You can also use one of three different eco-bags when you go shopping. The first two are polyester mini-bags in purple and navy blue (660 yen each). The purple one features two rabbits, a monkey, a frog, and of course, Hello Kitty walking in a line together, and the navy one features all the scenes of Hello Kitty with the different animals. 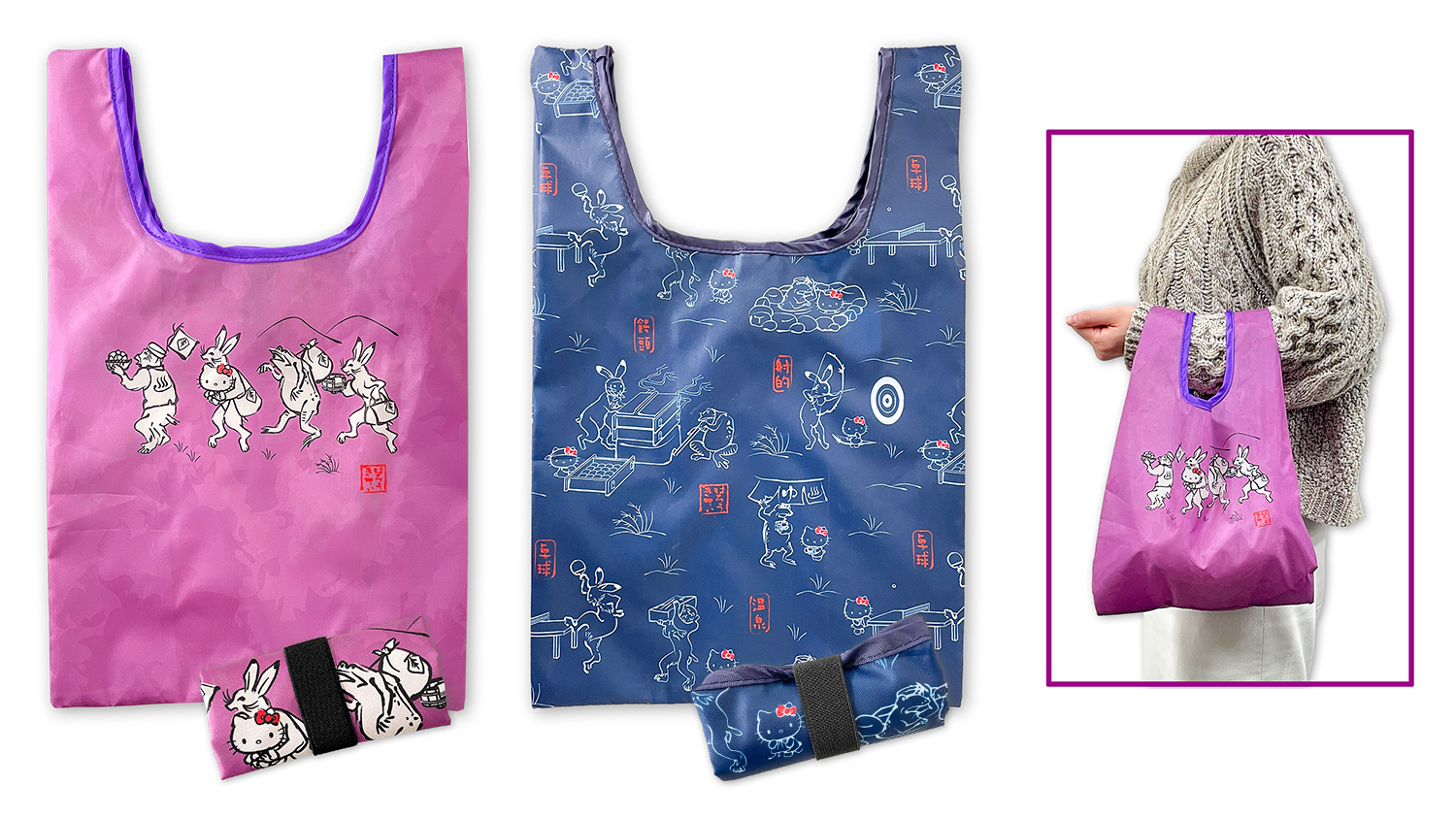 The final bag is a tall cloth tote bag decorated with five different scenes with colorful pattern circles in the background. It would make for a very stylish shopping or shoulder bag, and it even has a pocket on the inside for your phone! 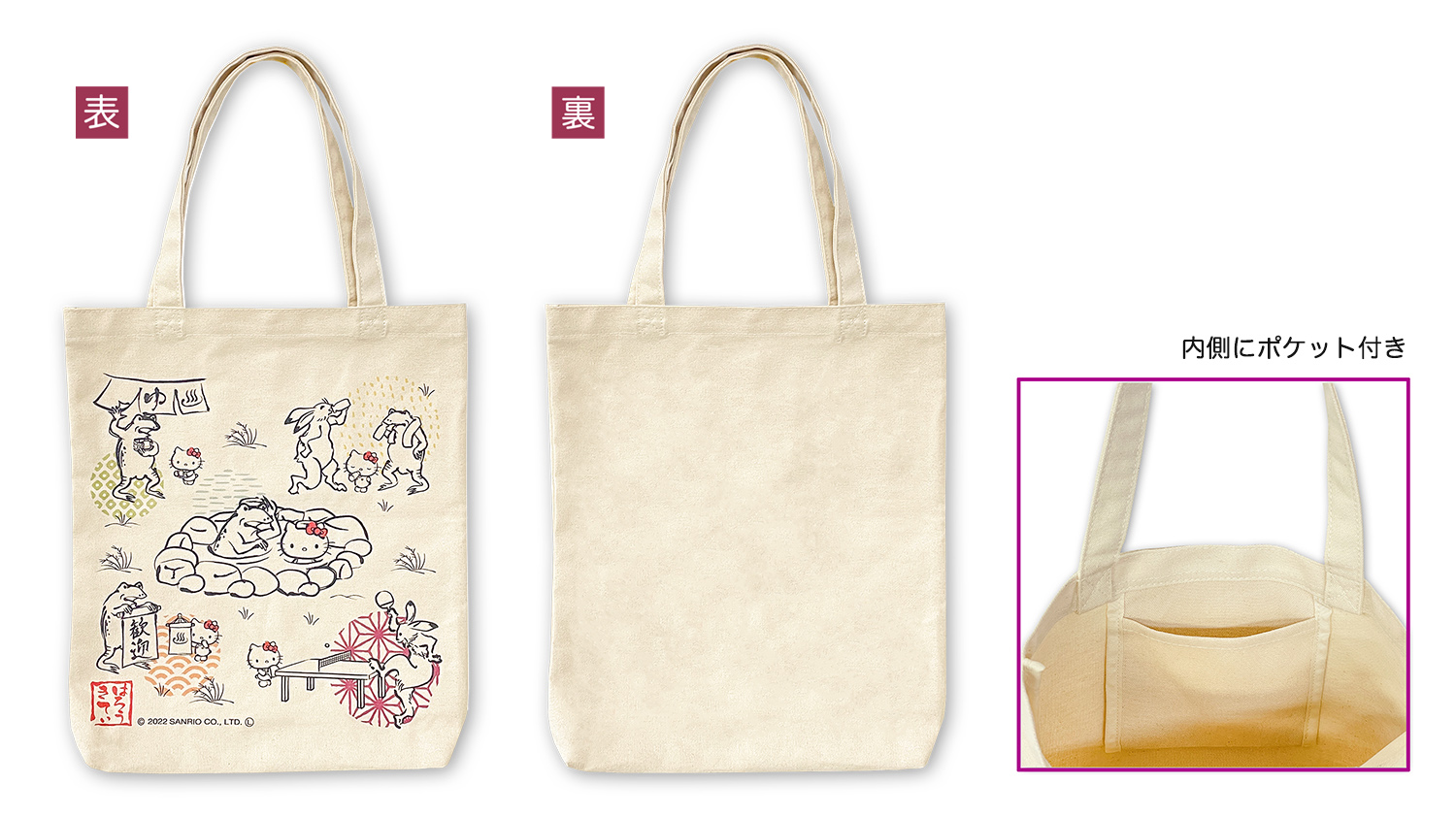 All of these items are available now on Asunarusya’s online shop, so if you’re a Hello Kitty fan, don’t miss out! And if you like these designs, check out the Hello Kitty x Scrolls of Frolicking Animals dishware, too!