Happy to See Me: Fly on the Wall

by admin February 26, 2020
Welcome to a monthly Fly on the Wall group post. Today 4 bloggers are inviting you to catch a glimpse of what youd see if you were a fly on the wall in our homes. Come on in and buzz around my house. At the end of my post youll find links to this months other participants posts. 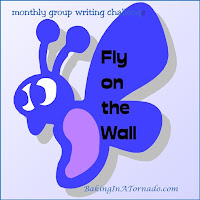 I've talked about the fact that PurDude doesn't read cues. Well, here's where he got that from:

Hubs came home late from work and I had left him a plate of food on the counter. He was eating dinner with his back to me, in the den watching Purdue basketball.

Me: Give me a break!

Hubs: Are they winning?
Me (rolling my eyes even though he can't see them): Seriously? Do these sound like happy sounds I'm making?

Hubs went out to pick up dinner when I noticed that he left his cell phone on the counter.

So I immediately grabbed my phone to call him and let him know where it is.

I'm sure you know how that went.

I've been doing this laundry thing for years so losing a sock is hardly anything new. Nothing fancy about it so I just forgot about it, I have plenty of socks so I didn't even really miss it.

Apparently, though, it missed me.

A few weeks later I caught a glimpse of something black wedged between the washer and dryer. Once retrieved I saw that it was my sock. 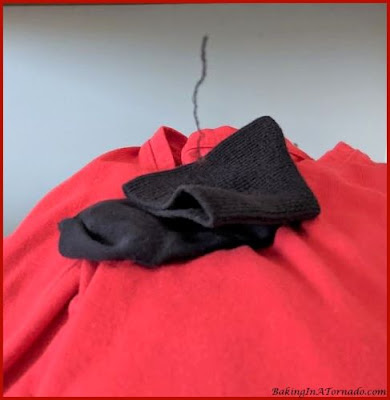 And is it my imagination, or was that sock happy to see me?

Hubs comes home from work, I hear his garage door go up, his car pull in and stop and his car alarm go off. Huh?

I open the house door to the garage and he's stopped the alarm but his car is turned back on. He turns the car off again and the alarm starts up again.

Me (yelling over the alarm): What are you doing?
Hubs: I don't know, when I turn the car off, the alarm starts.
Me: Press the button.
Hubs: What button.
Me: On the key fob.

Hubs looks at me like I'm speaking a foreign language and turns the car back on to stop the noise. I tell him to shut the car off again and I turn to grab his spare key hanging in the laundry room. The alarm starts again, I press the button on his spare key fob and the alarm stops.

Hubs: What did you do?
Me: I pressed the button on the key fob.
Hubs: What button?
Me (rolling my eyes): Am I going to have to follow you around from now on?
Hubs: Yeah, probably.

By now you all know that my youngest moved to Boulder in September. I'm thinking Colorado, with the mountains has to be much colder and snowier than our winters. He may have all kinds of fun stuff to do that I don't have, but at least I don't have to deal with all of that snow and cold.

One Monday afternoon recently it was snowing yet again and it was absolutely freezing out. I sent PurDude a PM:

Me: I'm having your weather. It's snowing for the second time this week and it's 2 degrees out.
PurDude: I went skiing yesterday, it was 50 degrees.
Me: No way it's that warm in February, but that's great skiing weather.
PurDude: Yeah, it really is that warm, and it's going to get up to 53 degrees later this week.
Me: You're killing me.
PurDude: Trying.

I googled the weather in Boulder and nope, he wasn't kidding. I may have to move to the mountains. 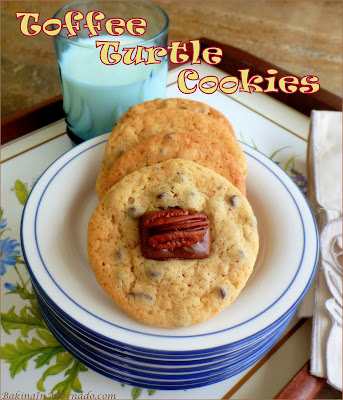 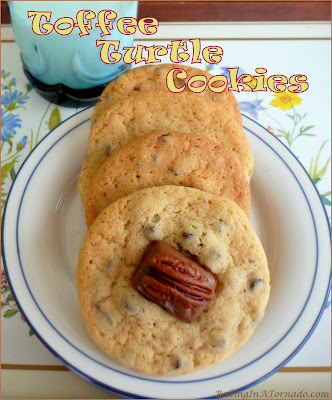 Ah, the power of baked goods. I wrote a post about it recently called Bring Me to You. Now I've seen more of that power. I had achieved symbiosis.

I had baked a batch of my Toffee Turtle Cookies. We all loved them, but Hubs and College Boy had their favorite parts. Hubs loved the cookie with all of the pecan pieces. Nuts aren't College Boy's favorite, but he loved the toffee.

Every time College Boy is here, when he leaves I tell him to be safe and make good choices. He got a little sick of it, I suppose, although I don't know why. I know he's grown, but I'm still his mom. Anyway, he'd sort of playfully mock me as he left the house so I decided to change it up a bit.

The next time he left the house, I called out to him:

That shut him up!

It's been a tough sports year for me. The Red Sox sucked, the Patriots sucked, the Celtics dropped from 1st to 4th and even the Purdue basketball team had a dismal record.

Normally, if I'm yelling at the TV, my family knows I'm watching sports, but at the beginning of this month the games that would a Boston fan might want to watch (ie: yell at) were few and far between. So it was a surprise when my family walked in the door and I was yelling at the TV.

Me (yelling): Give me a break, what are you, blind?
Hubs: What are you yelling at? There aren't any games on today.
Me (watching the impeachment trial): There may not be any sports on, but I'm still sitting here watching a bunch of grown men punt.

Hubs needs a part for his razor and can't find it locally. One afternoon he comes over to me and shows me a picture of the part on a website. It's a $10 part.

I take his phone to show him where his cart is and it has $800 worth of stuff in it.

Yeah, I grabbed my laptop and ordered it for him. Saved me $790.

Hubs and I were going out and I was wearing my olive colored jeans.

Hubs: You ready to go?
Me: I just have to run upstairs and grab my purse.
Hubs (pointing to my maroon purse sitting by the counter): It's right there.
Me: That's the wrong color, I'll go get my olive purse and move everything into it.
Hubs: Just take this purse, it's already here and has all your stuff in it.
Me (heading up the stairs): Fine.
Hubs: Then where are you going?
Me: To put on my maroon jeans.

Now click on the links below for a peek into some other homes:

Never Ever Give Up Hope
Menopausal Mother
Spatulas on Parade

Directions:
*Preheat oven to 350 degrees. Cover baking sheets with parchment paper.
*Cream the butter, margarine and sugars. Beat in the eggs and vanilla, then the flour, baking soda and salt.
*Mix in the chopped pecans and mini chocolate chips.
*Roll into about 1 inch balls and place on the baking sheets. Press down slightly with the heel of your hand.
*Bake for 14 minutes and immediately press a Heath miniature into the top of each cookie. Allow to cool for 2 minutes before removing from the baking sheet.
*As soon as the top of the toffee bars start to melt, press a pecan half into each. Allow the melted chocolate on each cookie top to harden before storing cooled cookies.
Back to News
Use left/right arrows to navigate the slideshow or swipe left/right if using a mobile device