Among the cleansing red rocks 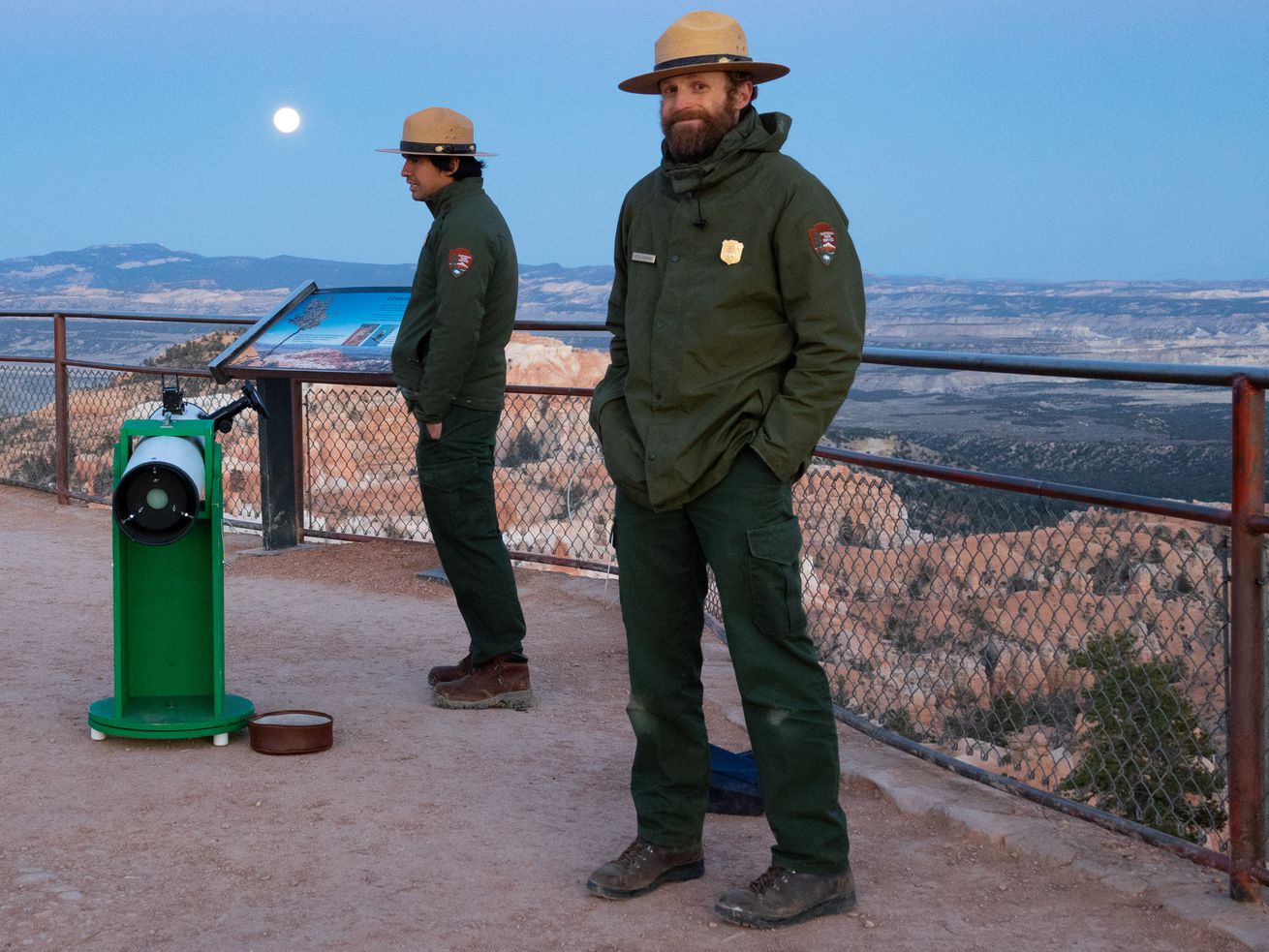 Peter Densmore, right, poses during a Facebook live session of the Pink Moon rising at the rim of Bryce Canyon. During Bryce’s closure, Peter tried to help the banished public experience the park. | Provided by Peter Densmore

A full brown beard tickles his face. Rising at 5:30 a.m. is easy after serving in the Air Force, but he won’t be trimming today. He laces his boots, adjusts his ranger hat and grabs a backpack before stepping out of the cabin and into the cold.

It’s just above freezing in Bryce Canyon on May 1, but that’s no sweat for a Chicago boy. He doesn’t wear a mask, because the park has been closed for weeks. Not that Peter Densmore ever stopped doing his job. He live-streamed ranger chats and geology talks, posted photos of pronghorns and greater short-horn lizards, and shared a wind-crippled video of the sunrise from Bryce Point.

He’s not going far the morning after the park announced a limited reopening. Armed with his fiancee’s sock to shield the microphone, he trots to Imagination Point for his last live feed of the lockdown. The pandemic presented a dilemma: how to show off the park without showing off. Just seeing this place can be a transcendent experience. All it takes is a gaze out over the rim, where towering hoodoos point at the sky like jagged red teeth.

After all, that’s what brought him back.

He’d been here once, practically by accident. He’d come for a friend’s wedding, someone he knew when he was living in Salt Lake City, finishing his military commitment at Hill Air Force Base. Then the wedding plans changed. He only stayed for a day.

But this is where he turned when he was looking for hope, when depression forced him to reevaluate his life in the depths of a Chicago winter, his drab metropolitan existence aggravated by the frustrations of freelancing and the gray cold.

There was something about the cleansing red rocks.

He found a federal job posting and applied to work at Bryce Canyon National Park, but he got cold feet when his video production company offered a full-time gig the same day the park invited him to a phone interview. He swallowed desire for stability’s sake.

A month later, he was handing out M&M’s bearing the company logo when the weight of his decision descended upon him. He called the park and got lucky.

He came back to live in a cabin built during the Great Depression, 50 yards from his nearest neighbor, hundreds of miles from old friends in Salt Lake City and 1,500 miles from home.

By 6:19 a.m, he’s at the overview with a tripod in place. The camera rolls, sending images across the internet: a glowing yellow sky and violet mountains, emerald forest and orange towers below. Robins chirp.

For the next hour, the coronavirus feels far away. Rays of light darken the canyon’s hue, revealing cracks and crevices in a landscape where eyes can get lost. A chorus of birds join in. Violet-green swallows and white-throated swifts. Nuthatches and bluebirds and pinyon jays. A red-tailed hawk circles in the distance.

Comments and messages roll in from people locked in their homes, thanking Peter. But the moment captures his attention. “It felt,” he says later, “like being washed over.”

Here, at the park, is where he met Kadi. Around Christmas 2016, she was on her way to Standing Rock, when serendipity brought her to Bryce instead. She approached Peter for a photo following a geology talk, and they stayed in touch. She moved to the park the next year. They were planning to marry this October, before the pandemic.

But Peter isn’t in a rush. His feelings, like this ground, aren’t going anywhere. Moving here, he says, “changed my entire life. And it’s made Bryce a deeply, personally special place.”

He stays for an hour, in solitude, fascinated by the swallows. He points his camera at a rock, waiting for one to land. He waits for many minutes. The bird never comes. Not that he’s bothered.