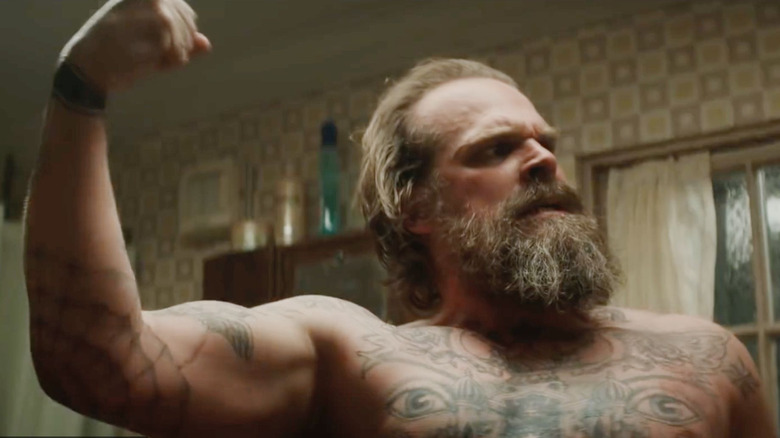 David Harbour and "John Wick" producer David Leitch are coming your way this December with a holiday-themed action movie called "Violent Night," the title of which is obviously a pun on the Christmas carol "Silent Night." That's a gentle song, almost like a lullaby, which conjures the image of the "dear Lord baby Jesus, lying there in [his] ghost manger," as Ricky Bobby once said in "Talledega Nights." However, to the best of our knowledge, "Violent Night" will feature nothing of that sort. Directed by Tommy Wirkola ("Dead Snow"), the movie is described as a "coal-dark holiday thriller that says you should always bet on red."

"Violent Night" has shown off some footage at CinemaCon, the annual exhibition event for theater owners at Caesars Palace in Las Vegas. It gives us our first look at Harbour in unconcealed leading-man mode outside Netflix's "Stranger Things."

While he gave some good supporting turns last year in Steven Soderbergh's "No Sudden Move" and as Red Guardian (seen above) in Marvel's "Black Widow," Harbour was buried under red demon makeup in "Hellboy" back in 2019. "Violent Night," by contrast, sees the actor best known for playing Jim Hopper striking out on his own as the star of another movie with his face clearly visible this time. Well, he still has a scraggly Santa Claus beard, but who's gonna be upset about that?

When not busy directing films such as "Atomic Blonde," "Deadpool 2," and the upcoming "Bullet Train," Leitch has found time to act as a co-producer on projects like "Nobody," starring Bob Odenkirk, another well-known TV face turned action movie star. Will Leitch and Wirkola be able to work the same magic in "Violent Night" with Harbour throwing holiday blows? Read our impression of the "Violent Night" footage below.

Santa Claus Is Coming To Town 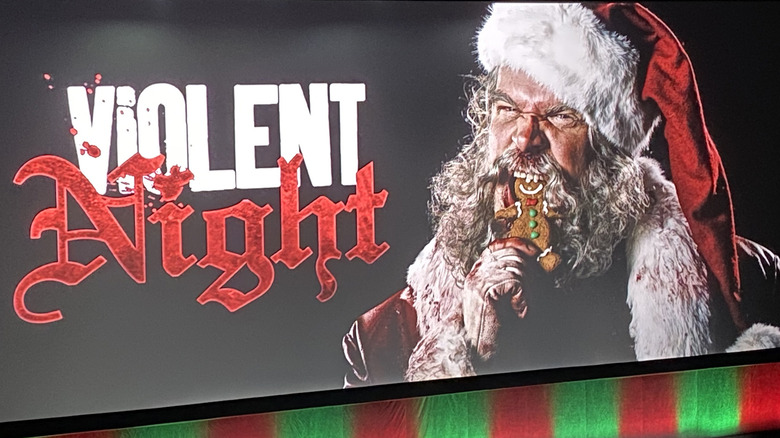 "Violent Night" is such a crazy idea that its star couldn't help but drop multiple f-bombs while describing it. Harbour said he stars in this thing as "f***ing Santa Claus," who swings a "motherf***ing hammer," while fighting off a group of mercenaries breaking into a house on Christmas Eve. As you can tell from the image they showed on stage, this ain't "A Christmas Story."

According to our own Ben Pearson on the ground in Las Vegas, this thing looks like they put "John Wick" and "Krampus" into a blender. The footage opens with a group of thieves, led by John Leguizamo, bursting into a family home, gunning down the Christmas tree and otherwise ruining everybody's night. A young girl has a radio and calls to Santa, asking for help, and Santa replies, "Santa Claus is coming to town."

In this footage, we see Harbour Claus beating a bad guy to death with a sock filled with pool balls, electrocuting another dude by stabbing him in the eye with a Christmas star and turning on the power. He's fighting not alone either. His elves are in on this mission as well, and we even see one doing martial arts, because of course we do.

This sounds a lot like that fake TV movie from the beginning of "Scrooged" where Santa and his elves are recruited by Lee Majors to fight terrorists, but we assure you it's very real. We can't wait to see it.

"Violent Night" is scheduled to hit theaters on December 2, 2022.

Read this next: 13 Box Office Bombs That Are Truly Worth A Watch