Polly considers the seasonal magic of the Far-North while avoiding the consumer extravagance of Christmas traditions.

It was time for a pep talk.

Polly, I addressed myself sternly, Christmas is coming. Its not going to move away like a wasp if you freeze. You need to take action.

My mother was asking if wed planned a menu. Friends had inquired about our plans. Id already missed the delivery dates for online shopping and eight-year-old Vita wanted to know where to hang her homemade decorations. Is there ever going to be a tree?

My immobility was a reaction to Christmas hype. What I really wanted was the sort of Christmas that only takes a minute to engage; just the gentle easing of the cork from a bottle of real champagne and a blanket spread amongst wildflowers by the stream. That would make my day merry and bright.

Lets face it; Christmas isnt a day of guaranteed greatness. For some its a bloody awful contrivance that triggers pain and suffering. Absences are more keenly felt. Loneliness echoes more resoundingly. Theres pressure to spend and perform. If youre not happy, the day can whisper that youre a failure.

I admire people who truly love Christmas. Their child-like enthusiasm can be contagious. But all the consumerism makes me jaded. Christmas can be so over-rated.

Were not a Santa kind-of family. We came close for a while, thanks to my mothers enthusiasm for tradition. Fuelled by grandmotherly tales of a magical man with a sack-load of gifts, Vita allowed herself to be led into a world of industrious elves and flying sleighs but she had her suspicions. 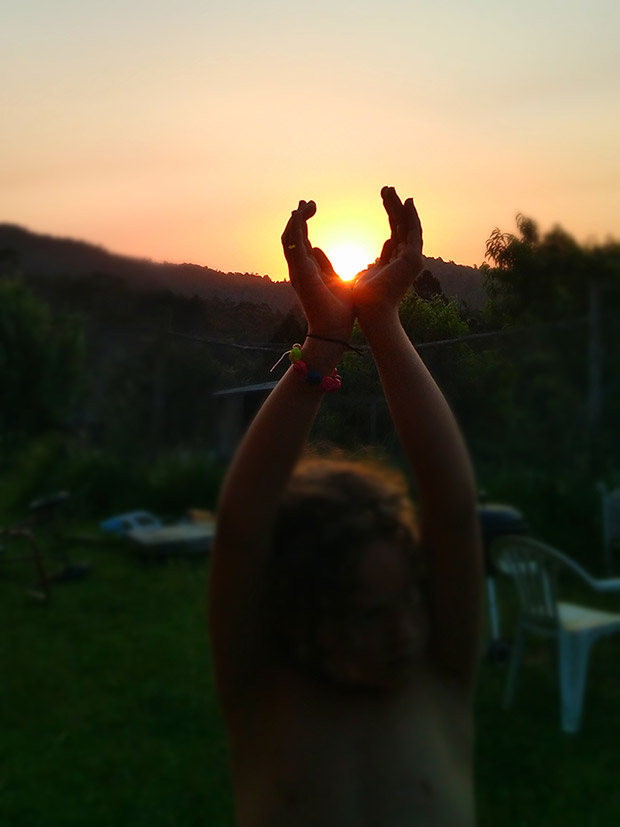 These were confirmed when she was four-years-old and failed to receive the live unicorn shed wholeheartedly believed was coming. In an ugly scene reminiscent of Frankenstein, she angrily punched me hard on the nose, drawing blood, and left us aghast at the monster wed created.

Weve been seeking balance ever since. Inching along the festive tightrope, I do my best not to fall. On one side lies a never-ending canyon of gaily-wrapped junk, lined with plastic trees and twinkling lights. Sink into this landfill of unnecessary, disposable trinkets and the last things youll hear are tinny carols playing relentlessly as cash registers ping.

This is the commercial worlds Christmas, with its insincere seasonal greetings; artificially sweetened to encourage consumer extravagance. Its a place thats simultaneously draining and hollow.

But the other side of the tightropes emptier still. Down there lies a desert of brown tones. Tumbleweeds are the only things moving across the stony, barren land. Thats the Grinch side of Christmas where no efforts made towards joyousness.

Ive been there twice and dont wish to return.

I was in New Delhi, India, the first time I chose to disregard Christmas. Backpacking alone, I had to stay a couple of nights in the city while arranging train tickets for my journey south. There were no other travellers around. I was 21-years-old and in a scrimping phase of travel. This meant I surveyed my windowless, dirty room with an almost gleeful satisfaction because it cost just 30-cents, with a couple of giant cockroaches thrown in for free.

December 25th was just another day in the heaving, grimy city. I told myself Christmas didnt matter and it very nearly didnt, except the hours seemed to drag in an exceptionally long, lonely manner and the grim shade of turquoise paint peeling from my cell-like walls will forever be equated with a sharp sense of mournfulness.

The second non-Christmas saw James and me on our land. We were in work-mode, keen to raise a roof on the house-site. Lets not bother with celebrations, we agreed.

Two-month-old Vita didnt care. There were no gifts, no special meals, not even calls to family because we had no phone reception. Instead we spent the day cutting timber and nailing it up. Eating brown rice at dusk, my melancholia tasted of turquoise peeling paint.

Its wonderful to step outside of routines and celebrate. It doesnt really matter what traditions are subscribed to; its important for the wellbeing of our hearts and souls to expend the energy and make certain days special, in ways that are personally meaningful. Summers what I love about this time of year.

The summer solstice is more significant to me than the Christian anniversary of a miracle birth. The children and I have been charting the suns setting point along the southern horizon. We do sunset dances in the long, golden light. Five-year-old Zendo jerks about as if hes receiving massive electric shocks in quick succession but the movement is fitting.

The energys high. A little crazy is good. 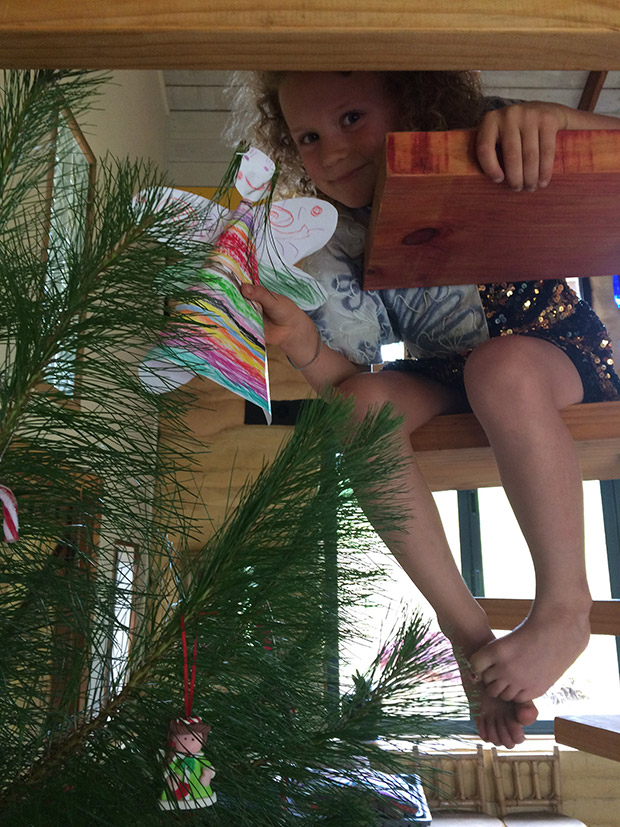 This is our hemispheres turn in the light. Dusk falls at 9pm, and warbling tui-birds start each new day before 5am. With temperatures warm, the living is easy. You dont have to try very hard to find seasonal magic.

Our Christmas meals tend to be outdoors and picnic-like. Shared spreads are fun and good food is one of lifes pleasures but surveying the supermarket frenzies at this time of year, I shake my head at over-loaded trolleys. Stores are only closed for a day. I understand the origins behind mealtime excesses. In colder climates, this was a feast during long, hard winters of boiled turnips and hunted bear, but do we really need to maintain the tradition of gorging?

Steady, I mutter, wobbling on the tightrope. In the desert down below, the Grinch advocates a Christmas fast.

The kids expectations for presents can threaten my balancing act as well. Its a pleasure seeing their faces light up at a gift they truly love but some years Ive bought foolish items to add to their piles, just because Ive somehow felt there wasnt enough. I dont need to do that. Now-days we make them an outdoor surprise and gift a memorable experience. Qualitys more important than quantity and an items true value isnt determined by financial worth.

We have friends who grew up in East Germany before the Berlin Wall fell. Their eyes still shine with emotion as they recall the single oranges they received annually in their Christmas stockings. I love the way they savour the memory, appreciating this simple thing.

Im thinking of recreating the experience by putting a block of organic butter in a Christmas sock for our kids. Having no fridge means dairy products are highly prized in their lives. Its best to give gifts that are treasured.

In theory, the greatest gift will be the sharing of our time. In reality, nobody can predict whos going to get upset or frazzled or require some space to breathe deeply. What you put in, is what you get out but even with an air of determined benevolence, the exchanging of presents can be awkward and liverishness can result from wine and rich desserts.

What I do know is this: at dusk on the edge of a long summer day, as the sounds of calling kiwis float across our valley and I reach the end of the tightrope, I plan on taking a moment to wish peace to the Earth and all beings. Its an opportunity for radiating shared goodwill across the planet.

Isnt that the true magic of Christmas?