Mother of All Baggage 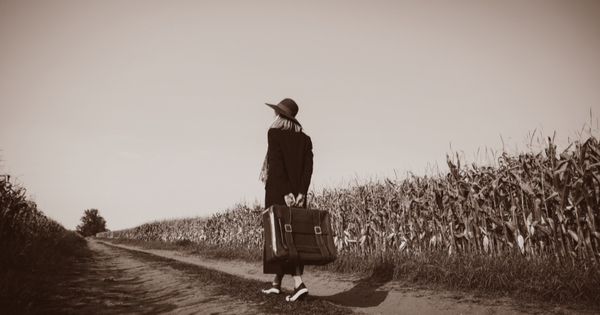 You are hiking. Let’s say for argument’s sake that you are hiking, okay? You don’t hike? Cool, don’t worry, toss in an alternate activity. It’s not like if you’ve never been hiking you can’t imagine hiking, right? You’re running. You’re skiing. You’re upside down on a unicycle, yodeling the Star-Spangled Banner in sign language. You’re fill-in-the-blanking. Hiking isn’t the point. Though your annoying resistance does bring up an important detail: We say no much easier than yes, don’t we?

So, what am I babbling about hiking for if this ultimately has zero, like, shit, to do with hiking? In part, I’m stalling. Why am I stalling? This life force is hard to verbalize, okay, to get your head and hands around, to own, especially at Starbucks as people keep pontificating on their iPhones, when your kid is down the street at Frozen camp and doesn’t want to be there as you leave, even if she sings “Let It Go” in the car like her little heart is on fire, and I want to do it justice. I want to do it perfect. But it’s 8 a.m. calculus class. It’s losing. It’s taking your heart and turning it inside out like a misplaced, mangled sock and yes, Einstein, something’s bleeding. I’m not above using an average metaphor. It’s your mother, okay? We can all, can’t we, identify — boil it down to our mothers, begin with being born?

Also, back to stalling: I have adult ADHD. Diagnosed at 30. Seriously. My mother rolled her eyes. Her look said, “Add it to the list.” The label, to me, made sense, but in the 1970s and ’80s it had another name. In my case, “awkward skinny girl who writes poetry in her head while they scream murderously her name to break through arms joined like metal bars in life-or-death games of Red Rover.” But also, “weird girl who made her peers laugh intermittently, freshly surprised that she could be funny.” Have I taken medication recently? Now you’re just being rude. Back to the hiking metaphor, and I will ask that you please keep your snide comments at the back door of your esophagus. I’m going somewhere. Really.

You are on a hiking trip. And hiking is great. Good exercise, killer weather, sturdy shoes, you’re in Utah, say, or Colorado or New Mexico. We’ve established you’re a shitty hiker but God’s sake, soak in the scenery! Seriously. Have you ever in your miniature, insignificant life witnessed such beauty? Angles of stone, colors burnt into being by sun, rock cut jagged by years, trees falling in woods that, in my opinion, do make sound whether anyone is there to hear it or not, growth gone wild into itself with no plan anyone can see. As my daughter would say, “A beautiful oops.”

No, she didn’t come up with that on her own. “Beautiful oops.” I never said she did. It’s the title of an incredibly clever children’s book with an enviable, simple yet profound message. Like when you are watching Shark Tank and go irate because why didn’t you think of that? I’m not claiming my daughter’s a genius. I am not one of those mothers, though she certainly could be a genius. She’s only four but you should hear the questions and declarations this child comes up with daily. “When are we going to test for Pre-K?” “What the hell are we dragging our heels over?” “We should have got on the lists by age two?” You’re entitled to your opinion. My own mother likes to tell a cute vignette about how a reputable pediatrician informed her I was going to be a “vegetable” because I wasn’t walking yet at 16 months. Regrettably, no, I’m not making that up. Now stop interrupting me.

Back to the beautiful oops of the mountains or valleys or whatevers that many attribute to God and if that works for you, awesome, but if it doesn’t, the spirit, universe, Buddha can all cut and paste. If you’re an atheist I probably can’t help you. Set the scene for yourself or, here, allow me. You’re wearing drippy khaki shorts you paid way too much for at REI. You forgot sunscreen. As we’ve established, your hiking skills are nonexistent. Probability is cracking up just looking at you. And here’s the thing — thanks for hanging with me — no one even asked if you wanted to go. No one asks the kid, “Do you want to be born?”

I forgot to mention the pack. Your back is major throbbing. Stuffed with miles of shit you can’t imagine how heavy. But try. It will make both of our sensorial experiences that much richer. Besides, you’ll know the worst paraphernalia you could haul, being you and all, and that is precisely what you take on this journey. You read The Odyssey. It’s a near universal. This is the detritus you thought you forgot, are so embarrassed, Christ, so humiliated to still carry. That’s what’s staring you in the guts and laughing. You know how it would be funny if you were looking at someone else? In that cringe-funny kind of way? That.

I mean, to your credit, there’s stuff you need, sure, and you’ve got it: tent, water pump, dried food, extra socks, long pants, sweatshirt. You’re not a moron. But your subconscious has sneaked a couple twenty-five-pound weights and a stone sculpture of a frog you made in junior high. That fucking drum set. Why didn’t you ever use it? It could have changed everything. Take an authentic look. Identify the refuse. Smashed crusty Mike and Ikes, a TV antenna, that Big Wheel you loved to pedal because of the way the wind moved through your soft kid hair, your seventh-grade earth science book, a nemesis worshipping rocks. A family portrait not quite funny enough to go on awkwardfamilyphotos.com, just sad, so the impulse is to look anywhere else, but you can’t keep from ogling that haircut, at least one visible zit, shoes that should never have been produced or worn without a fight. There are your parents. Go ahead. Knock yourself out. Do your best. Do your worst.

And then, of course, your older or younger brother(s) or sister(s). They don’t look nearly so stupid in their gear, do they? Their purchases seem purposeful. On sale. The one you hate or who hates you but hopefully loves you is front and center. The one who matters. The one who drives you crazy. In this journey they can remain your ally if you’re careful. You need each other. So that shit she did to you, dousing you with the faucet hose while you were just trying to dry the dishes to get to watch Fantasy Island? Why did she always get to wash and you had to dry? You know, let that go. You’ve got other crippling nonsense, so preserve. You’re gonna need as much room as you can get.

The adventure, Pal, before you even get started, is actually unloading as precondition to scaling the first anthill. Even quite experienced hikers miss this nuance. They get confused about what it actually means to be strong. Summits will not be reached, Facebook pictures will not be shared, the destination only tangentially relevant. When you no longer give a rats ass about what anyone else has done or thinks or how you look because you have finally arrived, because you finally put one foot in front of the other with no guarantee, you step out of the picture and into a new frame.

So why don’t you do it already? Well, it’s not that easy. You don’t know how. You have to be upfront with yourself about where you come from to get to where you want to go, which means you have to go back and look at what you would rather not see. You’ve got to go ahead and give the ugliest smallest darkest anemic sickly part of you a cool drink of water, a full breath of oxygen. An arm slung over the shoulder, a break. You’ve got to give in to what you so long resisted, and all that struggling was hard work. You’re going to have to abandon it and even though it hurts like a mother, you’ve grown used to it. Somehow fond.

You also have to know at least somewhat about where you want to go. You need to see your mother, your father, your sister, your brother, you teacher, your ex, the one who kicked your ass sideways, as they are, no better no worse than you, to the best of your ability, without you as victim and them as bad guy. You’ve got to make room at the table. Not because anyone is watching or keeping score. You may do the right thing and deserve a freaking Genius Grant. A Guggenheim Fellowship. And it may just end up like that Christmas no one talks about with turkey on the floor. You really don’t know if it’s behind door one or two. But choosing is your only way through.

I’m not a total jackass. I’m not mean-spirited. Certainly not all the time. This is a literary device. When I say you I mean you, of course. But I also mean me. You probably knew that. We’re smart. I mean, both of us can’t hike for shit, let’s face it, but we’re — I’m — you’re — here (I have faith in you, reader) — attempting to deal in honesty. You haven’t stopped reading.

It’s easier, they seem to imply, to do it together. Well, it’s so embarrassing, but hell, here goes: I’m hoping for the summit. I’m yearning to open my eyes. I’m aching to embrace it — the mother of all things — despite the terrible weight of the strain of the everything-on-my-back that I haven’t quite put down yet. And not only because I’m stubborn. Not only because I haven’t found a better way. I’m getting there. But it’s lonely. I was thinking that you’d come with me. And I’m asking. Although for your information that makes me incredibly uncomfortable.

Tall order, I hear you. But I mean, it’s part of the package. The submission guidelines are specific on the website. You want to be read/appreciated, you’ve got to recognize and claim yourself to the editor, the sappy ugly emotionally unregulated immaturity that given honesty can bring an occasional whiff of glory. That moral inventory is practically a prerequisite for publication. And I’m not a good rule follower. So sometimes I really want to follow the rules. Anyway, I bought my shoes new. And the expensive socks that seem way too thick. A $30 hat. So, let’s go. Let’s move.

The post Mother of All Baggage appeared first on The Good Men Project.