Has Spring Sprung Yet?

Spring is in the air!!! The sun is shining bright and the temperatures are warming up slowly. We had such a beautiful sunshiny day yesterday. Even though the temperature didn't get above 34 degrees, the rays of the sun are warming us up, increasing in intensity, and starting to melt the snow. That's just fine with us!

Although we can easily get another foot or two of snow during the month of March and even into April. Three years ago, right before we moved into the house, we were dumped with 21 inches in one day in the area. So anything can happen in Wisconsin this time of year. But we will appreciate the sunny days when we get them.
Yesterday, we did some work in the garage, then we sat out on the front porch for a while in the sunshine. It felt so good to sit in the rocking chairs again and soak up a little vitamin D.  Our friend Roger said I need to be in a bikini to get that vitamin D... LOL Those days are long gone, Roger.

Silly little Binney had to come and lay out on the porch too. She really enjoyed the sunshine and she has a fur coat to protect her from the cold temperatures.  We watched people out walking by the house, and even saw a motorcycle cruise on past!

Even though it was a little windy from the West, it felt good to sit out on the porch and enjoy this part of our house again. It's been a long winter, and sitting on the front porch is a distant memory from last autumn. After the winds kicked up a little more, we switched sides of the house and sat in the backyard, sheltered in the secluded area by the back patio.

Why where we sitting and resting?
Because we had just unloaded 15 heavy pieces of sheetrock! It's 1/2" thick, 4' x 10' sheets, which weigh 56 pounds each. But they are attached together as a pair, so that's 112 lbs. Ugh!
We got them all unloaded and stacked up into the garage. This is the first time in a month that we've even felt like really doing anything physical. After being sick for almost the entire month of February, this was great to get out and stretch our muscles and breathe in some fresh air. It was quite invigorating. Plus we didn't collapse into a fit of coughing and wheezing and crawling back into bed in our jammies.

So what do we need all this sheetrock for?
Well, this winter, before we got sick, Steve had finished insulating the whole ceiling of our entire garage. It's two stalls wide by two stalls deep so it's 24 ft wide by 40 ft deep. Since he got up all this insulation, it's made a huge difference in the garage temps.  No more cold winds blowing in the open soffit vents or the ridge vent along the roofline.  It can be well below 0 outside, but inside stays in the 20's or so, with no heat source. The Saturn starts right up with no struggling from a cold battery or engine.  It's nice to go out in the garage to get something out of storage, as I have a lot of my fabric inventory out there on shelves for my rug weaving.   We can work on projects with a supplementary propane heater if we want to warm it up, or do a needed car repair (hopefully not). Steve did change the oil in the Saturn the other day, in comfort of a warm garage.

This sheetrock is only about half of what we need, but our trailer can only haul so much at a time. We will make another trip on another nice day when the pavement is dry to pull the trailer down the road. You definitely don't want wet slushy snowy salty roads when hauling sheetrock on an open trailer.
Three of the sheets are set aside for another inside project. We were going to start doing the beadboard on the walls in the master bathroom, but Steve figured that we should tackle the ceiling first, then work on the walls.
The 100+ year old bathroom ceiling has some cracked areas where the plaster is uneven and it really should get a whole new layer of sheetrock all of the way across the entire ceiling. It'll be close quarters for working, and we will cut it in pieces out in the garage to bring in and screw up into place. It'll be quite a project, but it's something that we would like to get done before we even begin working on the walls down below. It will mean removing the bathtub for a couple days, but the shower will still be usable, as well as the rest of the bathroom facilities. Good thing we also have an half bath to use during the process too.
The previous owners had done some textured plaster
and rough repairs
that need to be covered up.

This crack over the shower area is a potential problem
if not taken care of right away. 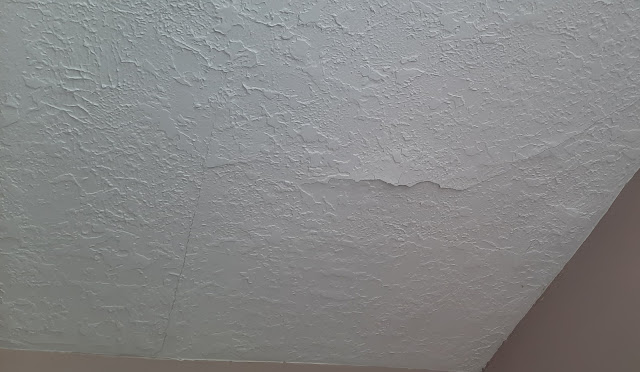 That will be an upcoming project on our radar....

~~~~~~~~
We had a couple little giggly granddaughters over for a sleepover on Friday night. They played together so well and then both finally dropped fast asleep, totally exhausted in the little grandkids room. I didn't even have time to read them a story.
In the morning they both crawled into our big king-size bed and decided to watch old fashioned Tom and Jerry cartoons---- upside down! For some reason, watching it upside down makes it much more hilarious, especially when you are only five and six years old.  See those chins in the air?

Later on, after a big breakfast, they got their "Green Thumbs"! They earned them by helping me pot some coleus rootings that I had started in the window in the kitchen. They learned how to carefully scoop the dirt in around the roots and pack it down. Here they are showing off their green thumbs. What good helpers. 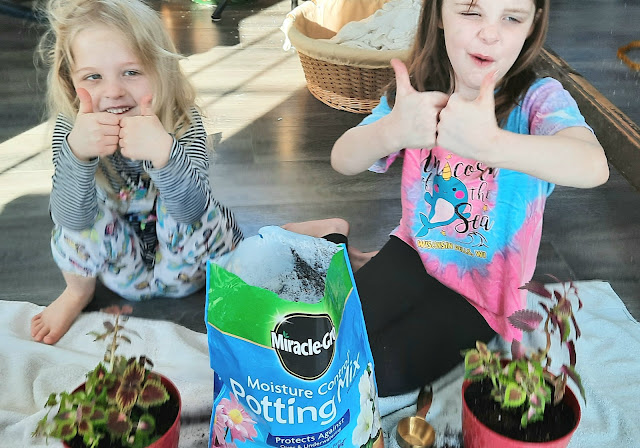 Of course we had to get in some time at the big Sanna Kangas Finlander Barn Loom. We've been doing a series of "caterpillar rugs" lately and they have been enjoying being the ones to design the rugs. I do the main beating part, and they help with all of the assistant designer work. They pick out each little piece of colorful knit scrap socks (they are left over factory waste from a sock knitting mill in New York). They decide which color should go next, to be inlaid on each row of the rug as we go along.

So far, the last three rugs that we have woven together on the loom have all sold to new customers. This one will go up for sale in my Etsy shop as soon as we finish it up. 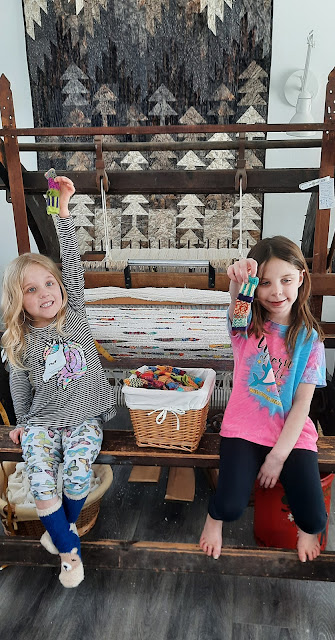 When our daughter and son-in-law came back from a trip to Milwaukee, they had made a pit stop at Trader Joe's for me. The nearest two Trader Joes are 150 or 165 miles away.  These are the two most favorite items of mine. Only available at Trader Joes, and not sold online either. Now I am stocked up on more cookie butter and another case of my most favorite wine, Two Buck Chuck White Zinfandel.  Steve loaded up my little wine rack and now I'm good to go for a while.

On Sunday, the youngest grandson Clayton came over to spend the day. He wanted to have some jobs to do. He started out with filling all of our bird feeders. The birds are coming back in scores and we have to fill them up every day now. The squirrels are gobbling down all of our suet as well as the woodpeckers, so we are going through two blocks every day of that too.  He knows how to lower the feeders and suet cages to fill them up for us. What a good helper.  The deer wander in at night to clean up anything left behind from the messy birds.

Clayton helped Grandpa remove the shiny stainless steel decorative rims from the motorhome. We are getting ready to take a jaunt down to Appleton to have our new tires balanced and mounted. We are waiting for a dry pavement day with no salt or slush or snow or ice. The tires are there waiting for us, as soon as the weather cooperates. I will do a separate blog post on that.
Clayton helped cook lunch and made us macaroni and cheese and hot dogs. He likes using the stove and being our little chef. It's good that he learns how to make food, even if it's as simple as boiling noodles and mixing up a box meal. He'll never go hungry. LOL

For supper, we had some leftovers to eat up from our take out meal the night before. But Clayton made his own dinner. Aldi carries these cute little pizza kits of three crusts and three packets of sauce. So he took out a crust and then he added pepperonis and cheese. Created his own little mini pizza. Just the right size for him.

~~~~~~~~
Steve got a new toy in the mail yesterday. It's a "surge tank"! Its also called an overflow tank for the radiator that goes on the motorhome. Last fall, right before the end of the camping season, we noticed a crack in our old one. We had replaced it 12 years ago, so we did pretty good getting 12 years worth of pressure out of it before it cracked. Steve sealed it up as best he could with epoxy last fall, but he wanted to replace it with a new one before we start doing any traveling this spring. He found one at a good price and ordered it, which came within three days. It even came with the right pressure pound rated radiator cap. He's like a silly little boy getting presents at Christmas.  Awwwwwww

He grabbed his tools, and went outside in the sunshine yesterday, making a beeline for the motorhome. He quickly removed the old tank and got the new one into place before I could even take a photo of the process!  Mr. Zoom Zoom.

It is lightly snowing out today with big soft fluffy flights floating down. We aren't supposed to get much, but you never know.   This is Wisconsin, and the time of year when the weather can change in a heartbeat.   Time to get some lunch going, and post this blog.