The day has finally come when I said goodbye to Lisa who has guided me through this long rehabilitation. 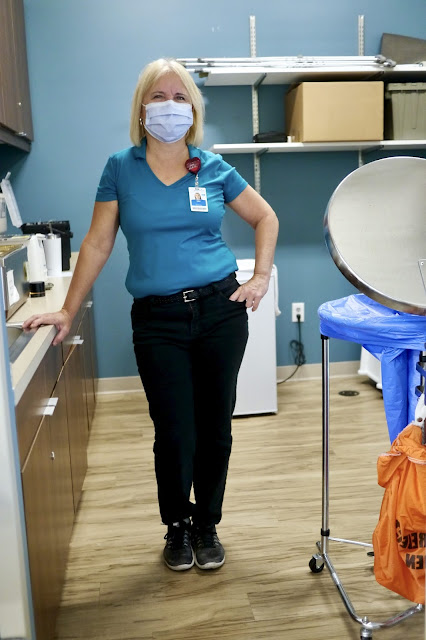 In this post from June 16, therapy was just beginning and who would have imagined that I would finally be released on October 6? Not me, for one. At any rate, reading back through that post reminds me of just how far I have come from those sad days when I was mostly useless. Not to mention, crying through my sessions! And while I still can't do some things, it is not her fault. Instead, it stems from my first break when they yanked on my arm to set it, doing damage at the same time. I now have a better understanding of why it was that I could not turn my hand over after the first break and that is because in the process of setting my arm, the bone adjacent to the radius, the ulna, was yanked upward, leaving me with an odd looking arm. In other words, my anatomy has been altered and not only just with eight screws and a plate in my arm. The good news is that I'm learning to live with the cards I've been dealt. Thanking her I gave her the pouches that I showed in this post and it seemed as if she was pretty pleased.

In other awesome news, yesterday Fallon passed the boards for her Nurse Practitioners license!! She studied like crazy for months and it paid off in a big way. Needless to say, we are all pleased and proud of her accomplishment.

I promised more on Sebastian so here we go....

First off, have a look at the where we stayed.  (Could that futon cover be any uglier?) 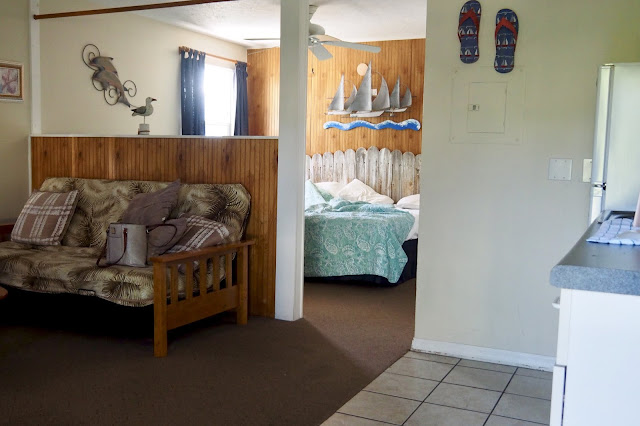 If we were to come again, I'd have to bring my kettle as I am no fan of tea made from microwaved water. For whatever reason, it just doesn't cut it. There was a toaster which made making peanut butter toast easy enough. Here's the little dinette. 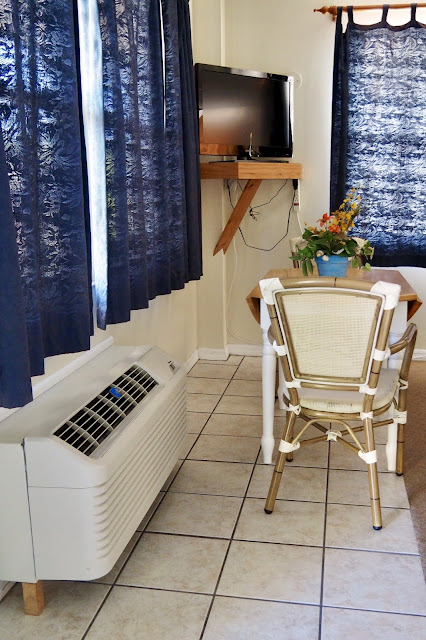 The "blackout" curtains could have been a bit stronger and the mattress a little bit softer, but those are minor complaints. All in all,  it was a perfect place to stay during a pandemic. Speaking of which, the cases are going down here while skyrocketing elsewhere. Isn't it amazing to think how this same virus has spread worldwide? Unreal!

Birds, sunrises, and fun restaurants, what more could you ask for? 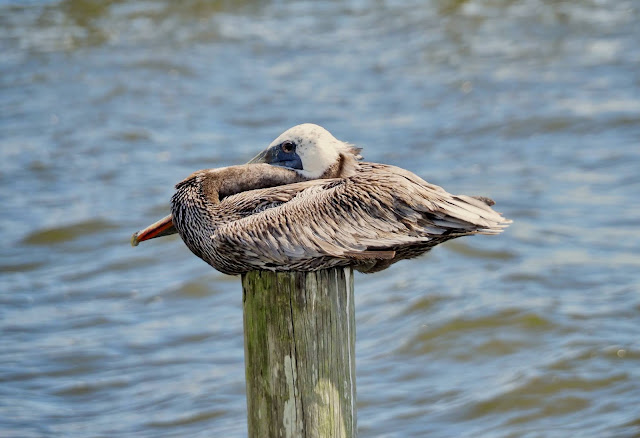 There were plenty of pelicans as this is nearby. 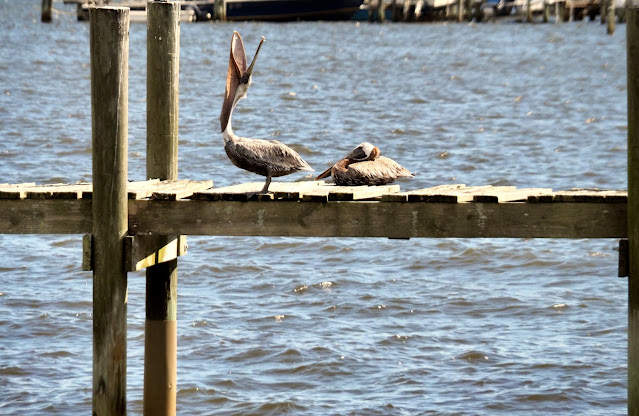 I was super delighted to find some Ruddy Turnstones on one of the docks. 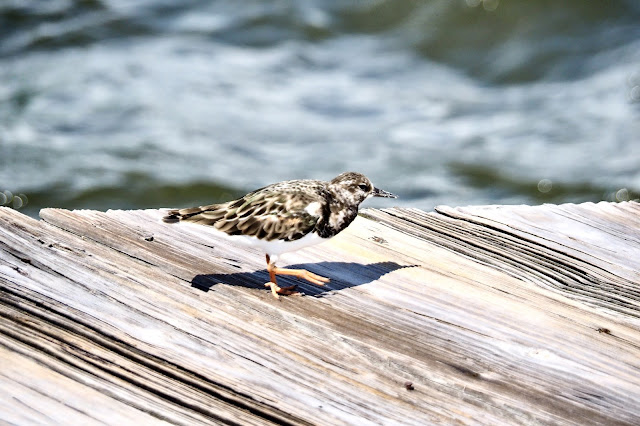 If there was a post for a perch, a bird found it, in the case below, filled with Terns. 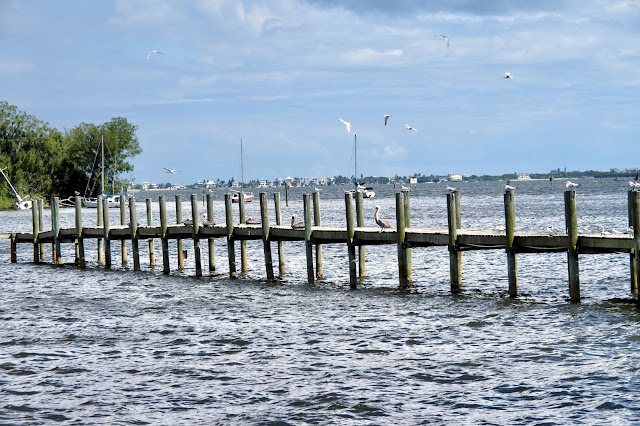 This same long dock is seen during the beautiful sunrise. Just wonderful to watch how darkness turns into light. 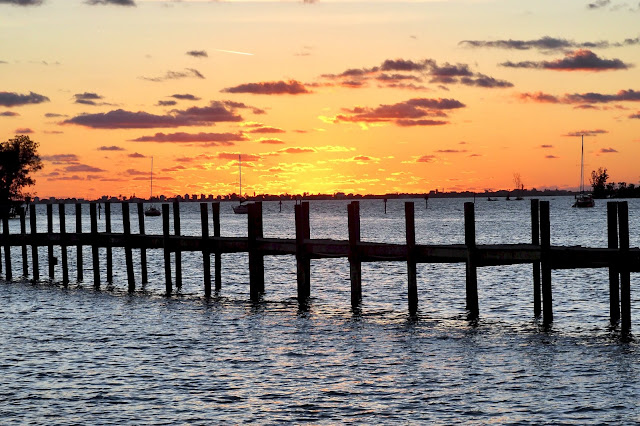 I love watching it come up over the horizon. 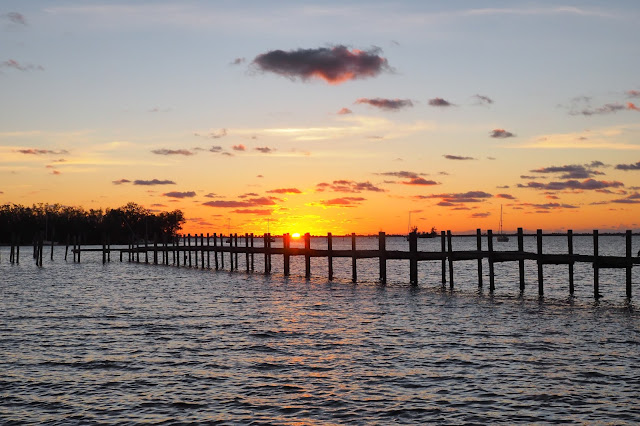 And so the day begins. 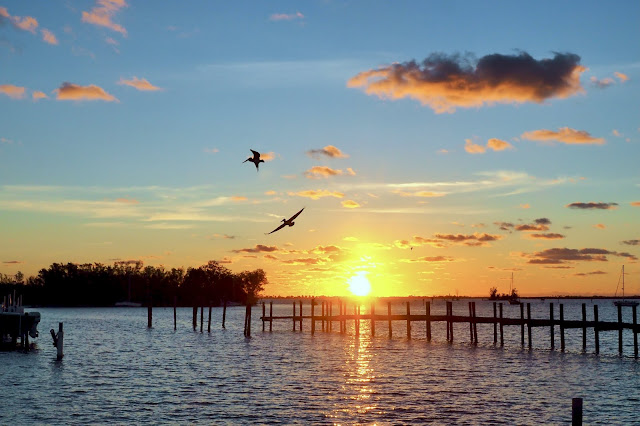 There is a lovely walk beside the river made even better by the presence of excellent restroom facilities. Adjacent to one of them were these very interesting and unique sculptures. 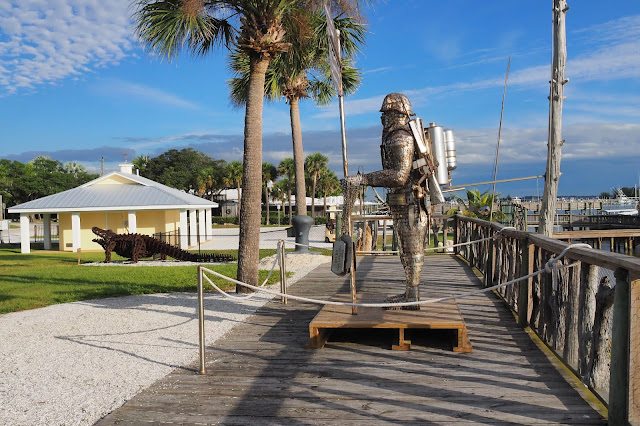 The gator was made from chains and the soldier and bird looked to be made from car parts? 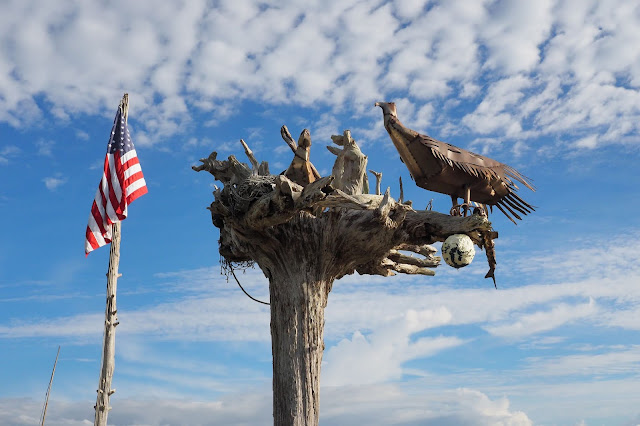 Unlike anything I've ever seen before.

Real birds! Starlings to be specific. Actually, I rarely see them either. 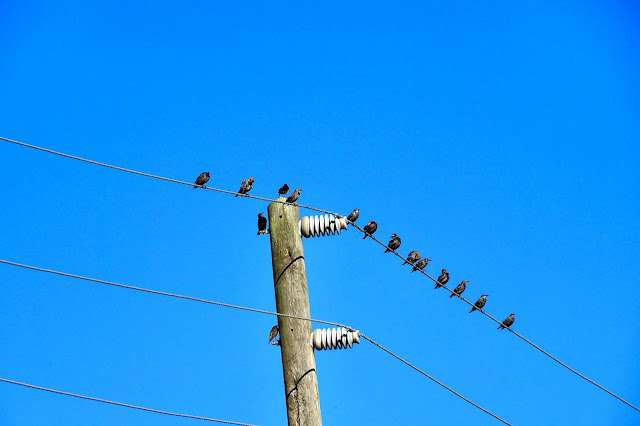 As well I noticed a restaurant across the street that caught my attention, Earls Hideaway. 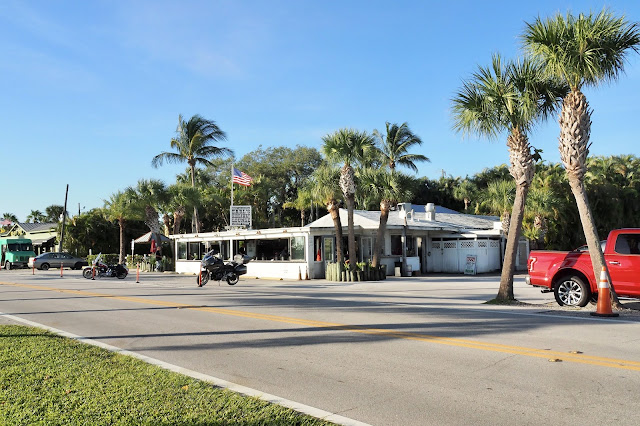 Our final morning we had breakfast there and that was an experience I won't soon forget. Going to a biker bar for breakfast proved to be even more entertaining than I'd imagined. Who knew so many people are day drinkers beginning at 8 in the morning? Twenty, by my count. Before you imagine it was folks who work overnight, let me put that thought to rest. The bartender was gruff as could be, and when one of the patrons kept asking her for Fireball, she told him to shut up and drink his Bud.  The open windows allowing the river breezes to flow in was very pleasant. Adjacent to the building there is a huge sand bar with a giant stage. A sand bar on land? The night before I discovered when we visited Captain Hiram's, a famous local landmark, that a sand bar is a bar built on sand. Duh! 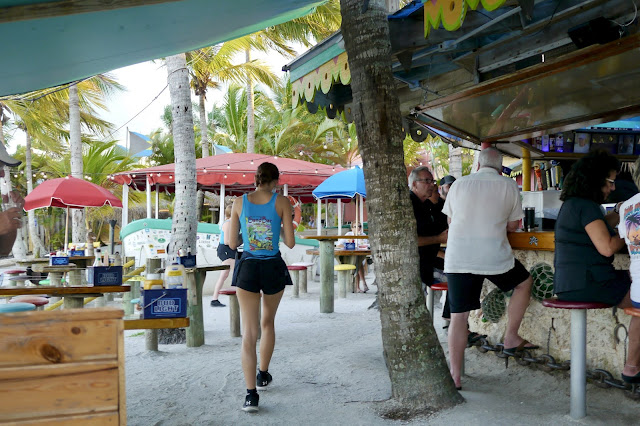 The food was mediocre at best, but they did have live entertainment. 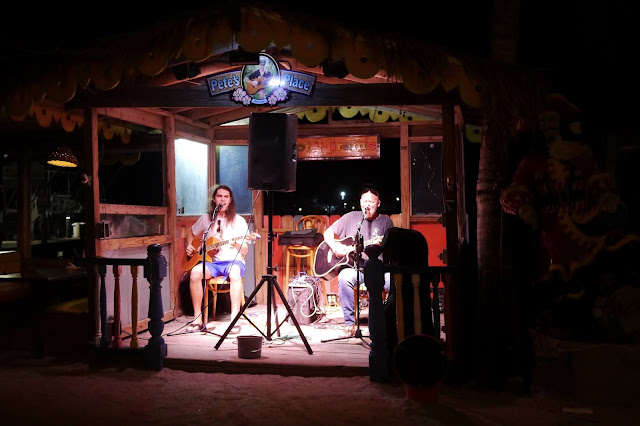 Thinking back on it, if I recall correctly, they never once sang Margaritaville which was a relief. Actually we spent a good deal of time talking to the couple in the next booth who were visiting from the Villages, in town to see an act at Earl's Hideaway the next evening. :)

Before heading over there, I'd seen on the Google map that there was a pickleball complex near to where we were staying, so on the way home we found it and was it ever fantastic with covered picnic tables, restrooms, a wind sock and water fountains. 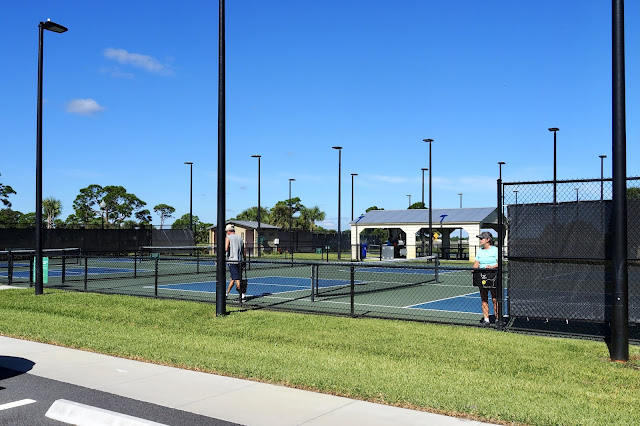 My plan was merely to work on my serve on a real pickleball court which I did, but soon another couple arrived and Bruce asked if they would like to play. Of course they would! Three games later and seriously hot and sweaty, we bid them goodbye and began the drive home, stopping first at the home where I lived for only two years while finishing high school. The area is mostly unrecognizable, as was the home where our father died. 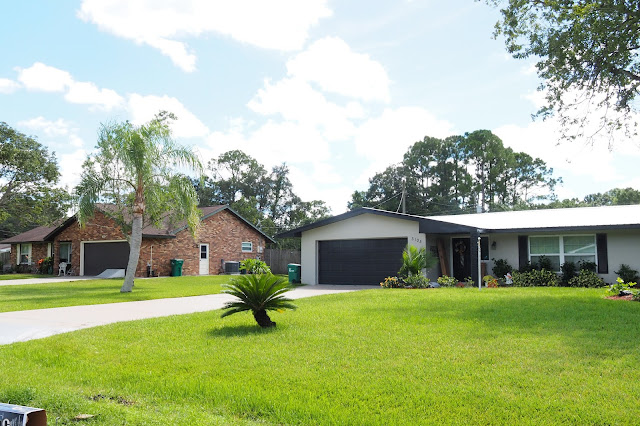 Actually our home looks pretty much the same, but the brick house sits on what was once a huge empty lot that I mowed countless times on the riding Snapper mower.

Although the trip was short, it was packed with fun and I have to credit Lisa for getting me back to not quite pre-breaks, but close. Reading back to what I could not do then and what I can now, I am so grateful to have had her help.