For once I was in the right place at the right time.  I finally managed to get pictures of a

Monarch butterfly on the dwindling zinnias.  I took about a dozen shots to get one with the wings open.

Here's another chipmunk-planted safflower in one of the flower pots.  Almost makes me glad that I'm a slacker at weeding. 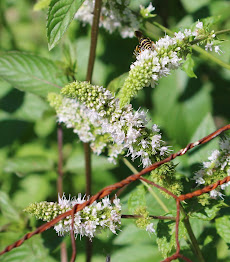 There were tiny bees on the peppermint flowers today.  Little tiny bees.

This morning I went over to Zambaldi to visit DS and got to watch him filling kegs.  It smelled great in there because the hops have a citrus aroma.  Made me wish I liked beer better.

In the afternoon I finished the cast toe sock.  I meant to start another one before supper but I fell asleep on the couch instead.  Those little cat naps are so refreshing, aren't they?

“Well, everyone loved him.  People went out of their way to tell me how lucky I was to be engaged to him.  I could not bear to disappoint them by saying I really did not want to marry Ham, that I wanted to change my mind.  So, I let him keep on pushing me around.”

Fay reached over and took the sopping towel from Honey.  “Let me fix you a new one.  This is dripping all down your sweater.”  She dumped the unmelted ice into the sink, wrung out the towel and hung it over the stall wall next to her.  She shook out a fresh towel, loaded it with more ice from the bucket, folded it carefully and handed it back.  “When did he start hitting you?”

Honey slowly and carefully eased the fresh ice pack onto her bruised cheek.  “Thanks, that feels better.  When did Ham start hitting me?  Let me see…on our wedding night.”

“You are shitting me.”

“No, I shit you not.”  She chuckled at the shocked look on Fay’s face.  “You are surprised that I said shit aren’t you?”

“Anyway, after our wedding reception, the biggest most lavish the country club had seen, we retired to our honeymoon suite in the grandest hotel in Atlanta.  Mama and I had shopped for weeks for my negligee and peignoir; it was a vision of white silk chiffon and charmeuse.  Ham barely gave me a chance to put it on.  He pulled me to him after carrying me over the threshold.  I thought he was going to kiss me.  Instead he grabbed the two halves of my dress back and ripped it.  Tiny pearl buttons flew in all directions.  ‘Get undressed,’ he growled.  I was shocked, too shocked to protest.  I just stood there, tears streaming down my cheeks, and took off my dress.  When I reached up to take off my veil he said, ‘leave it’ so I did.  I stripped down until I was wearing only my veil.  ‘Put your shoes back on’ Ham said.  I did.  Then he slapped my breasts, leaving red handprints on the white flesh.  After a while I did not even feel it.  Eventually he pushed me back onto the bed and leaped on me, stabbing his penis into me as if it were a knife.  I did not feel a thing.”

Fay felt as if she would never breathe again.  She watched Honey’s face as she told her horror story and not a flicker of emotion moved across her face, perhaps a moment of wonder and regret, but no revulsion, no fear, just blank acceptance, as if it were her due.

“He was very careful at first not to hit my face.  We lived only a few miles from my parents’ and he knew my mama had eagle eyes.  As the first few years of our marriage pasedt, Mama would look into my eyes and ask, ‘Are you happy?  Are you okay?’  I knew she knew what was going on somehow, but I was never brave enough to say anything.  We moved away, she died, I never told her the truth.”  Fresh tears fell, soaking into the towel to mix with the melted ice.

“So what set Ham off today?” Fay asked, conscious that time was passing.

“Well, it did not help that it was obvious you expected me to say something.  Ham likes to be masterful, especially when he is in a new place.  Then I said I would have preferred homemade toast.  That is when he slapped me.”

“Oh, Honey, I am so sorry my behavior made him hit you.  I have been hit enough over the years that I know how it feels.  And not just the physical pain but the mental and emotional pain too.”

Honey reached over and held Fay’s hand.  “Thank you.  You are the first person who has apologized to me since, oh I do not remember when.”  She removed the ice pack, stepped to the sink and opened it, watching the shards of ice tumble into the white porcelain basin.  She wrung out the towel as Fay had done and hung it next to the first one.  Then she dumped the remains of ice and water out of the bucket.  She dried her hands on a paper towel and used the towel to wipe up any water than had splashed out of the sink.  “There, that is cleaned up.”  She turned to look Fay in the eyes.  “I really appreciate you listening to me today, Fay.  Do not feel like Ham hitting me was your fault.  He would have found another reason before too long.  His business is not doing well so he is taking it out on me.  I can take it.”  She dropped Fay’s hand and hugged her.  “It is okay.  Really.”

Honey looked at herself in the mirror.  She ran her fingers through her hair and tucked it behind her ears.  “I think Ham needs to see his handiwork in front of everyone, don’t you?”

Fay stared transfixed at the transformation in the woman before her.  “Uh, sure.”

Honey turned toward the door and laid her hand on the handle.  “Come on, perk up.  I will not die from one little slap.”

Today's toss was a snowman teapot.  I have two more teapots to toss, well, carry carefully upstairs, wrap in newspaper, and gently put into the Goodwill box but I plan to do one a day for a couple days while looking for more things to toss.  I'm keeping Great-grandma Stephan's brown glazed teapot though.  Gotta have a teapot and it might as well be an heirloom.  She was Barbara too.  Aunt B commented today that soon my basement will be empty.  Not even close!  I'll be tossing one thing a day for the foreseeable future.  It's so satisfying.

Later in the afternoon I went over to see LC and OJ because they're going back to day care next week and won't be available for random visits.  Fingers crossed that things stay healthy at the college and the kids do too.  All the kids.