Lately every other day is dreary and drizzly. They predicted snow and rain today. We had a little flurry action in the morning and a little drizzle in the afternoon but nothing really serious. Just dreary. Yesterday was sunny, tomorrow is supposed to be dry and partly sunny, then tomorrow night wet, slushy snow is supposed to slam down on us. I vote "no" on wet snow.

I filled the feeders in the afternoon and the call went out to all squirrels immediately. I had barely closed the patio door when the first one arrived and there was a steady stream of squirrels until all of the peanuts were gone. There's a litter of shells under the feeder because one of them sits up there shelling and eating the nuts right there, no scampering off with them like the rest of the tree rats do. 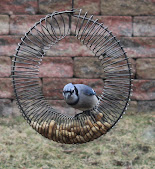 But then Bluejays came too! I haven't seen a Bluejay since before winter. Do they migrate? Are these the Spring early birds? I don't know but I sure had fun trying to get a decent picture of one. They also visited the cob corn way back by the fence but those are hard to get a picture in focus.

I made bread dough today. I'm taking Semolina Bread up to the writer's retreat on the 11th and I wanted to give the dough time to mature and develop good flavor. This recipe is from Artisan Bread in 5 Minutes a Day and it's my favorite. The dough is good for 14 days in the fridge and it gets better and more flavorful the longer it stays in there. Late next week I'll bake it all up then slice it to take up to The Clearing to share with my friends.

The daily art today was hard. It's what's called a "blind drawing" which means you look at the object you're drawing, not down at your paper and what your pencil is doing. I tried to draw a pitcher of flowers. It didn't go well. I may try this exercise again.

Painting no. 20 is terrible. I think it's my worst effort so far. Don't try to tell me it isn't so bad, I have eyes and can see that it's...well, it's terrible. I almost threw it away and tried a different picture but that would be cheating. I also almost didn't put it on here to show off my complete failure to make something decent today. I blame the dreary weather.

Oh, in bird news, when I was going to pick up DS at the hospital yesterday I drove down a back road to get to the bridge and in the ditch was a pair of Sandhill Cranes! Right there by the road. I didn't stop to take a picture because I was on a mission but it was very cool to see them.

I cast on another cast sock last night and am making it out of the leftovers from a few hats. I hope someone likes things that don't match like I do.

Today I tossed a bag of ancient edamame that had opened and spilled in the freezer. Made a nice mess for me to clean up.

When I went to the grocery this afternoon I got brave and did "shop & scan" which means I used my phone to scan the items, bagged them right away in my cart, and then went to the self-checkout where the attendant helped me complete the process. It was a much more efficient way of checking out than waiting in line or doing it myself at the end. I may do it again. I'm getting so modern and tech-y.

DS texted to say that he feels pretty good, is taking naps, and being a good boy.