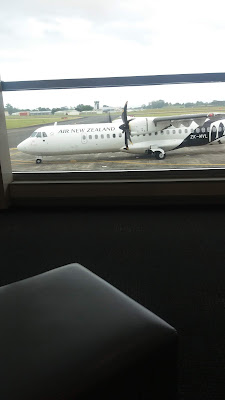 Christmas for 2019 was very busy, starting for me with a trip to Wellington the weekend before.

Harry chose not to come so I flew and was met at Wellington airport by my sister-in-law. We drove to the top of Mount Victoria to climb the steps and take the typical Wellington harbour pic so often used for Wellington. It might look nice enough but believe me it was very windy and a bit chilly!

We had a bit of a ladies day out having morning tea around in a cafe in Days Bay and then a bit of a drive around Eastbourne and its homes. These are rather expensive but actually are rather nice if you like large older early settler homes.

The following day we went to the airport again and picked up my sister who had also flown in to have a Purdie clan Christmas with our parents.

This was to be a special time for us all as a family, as my parents are both getting old (Dad is 90 and Mum will turn 90 in April next year) and some are experiencing ill health at the moment. It will be a time to nestle in my memory for the rest of my life.

The following day (Saturday) we all arrived at my parents including my eldest and her family for a lovely spread for lunch supplied by my two sister-in-laws. It was lovely to have this time together for a few hours and then we regrouped for leftovers for dinner.

Our family have always had the tradition of taking a family group photo on Christmas day. 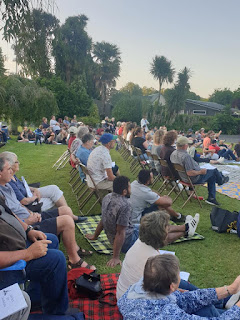 The following day I took Dad and Mum to their Church for a lovely pre-Christmas service where we focused on Joseph and how he felt about the fact that his wife was having a baby who was not his but, the Son of God. I had a last stop at my eldest and then they dropped me off at the Wellington airport to see the planes and after a twenty minute delay, I flew home.

The airport is very automated these days and I don't like not having the personal touch of check-in staff. I'm not a frequent flyer so its rather special for me to fly anywhere. I wonder if the two missing bags of luggage that caused our flight to be delayed, would have been lost had there been people overseeing all that.

Harry picked my up from the airport and we arrived back in Tirau just in time for the end of the annual Carols by Candlelight on the Tirau Community Churches front lawn. I must admit it felt a little odd not having had anything to do with the preparations as I no longer work in the office.

From the following day on it was a bit of a flurry of last minute shopping for food now I knew some family were coming to stay and then the arrival of our eldest and her family who stayed for two nights. 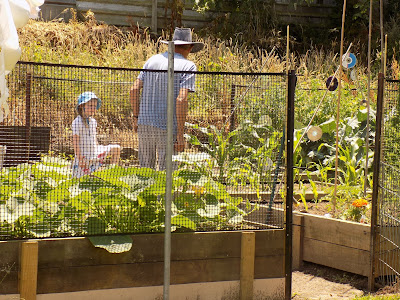 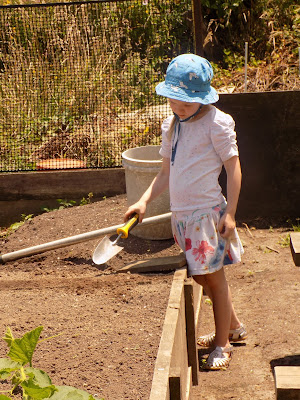 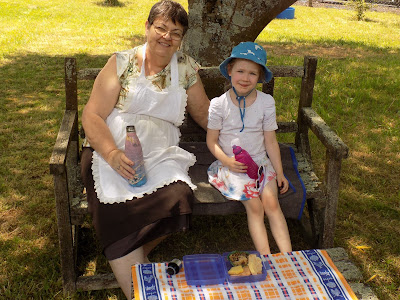 While her parents and brother went shopping Kate enjoyed some time with Opa and Nana, helping Opa in the vegetable garden - something they don't have as they live in an apartment and making some muffins with me. We also made lollie cake a traditional sweet treat I have associated with Christmas for years. My Granny made it and it was a rule in our family that you had to be thirteen and over to be allowed to have a slice.

When it was time for some lunch Kate and I sat out under the big spreading silk tree in the middle of our front lawn to enjoy a bit of cool from being in the hot kitchen baking and to taste the muffins warm from the oven.

Interestingly, Harry reminded us that the chair we were sitting on was made by Kate's mum when she was at high school and in a group of students in a YES team. (Young Enterprising Students.) They made the garden chairs and table (in front) using up-cycled fence strainers etc from local farms. It's stood the test of time for over twenty-two years but is in need of a little repair so it doesn't fall to bits when sat on in the not too distant future. Kate found it interesting that her mother had made the furniture. 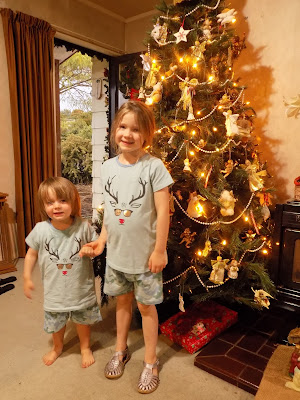 Finally all those last minute things seemed to have been done and we had a light tea, settled into the evening with the two grandchildren putting up their stockings on Christmas Eve in the lounge.

As a child I had a large woolen sock of my fathers that was put at the end of the bed and some time during the night it would get filled. As a parent I couldn't understand how it was done without waking us up and it wasn't until even later that I was told the other sock in the pair that we had at the end of our beds was filled in another room and just placed in exchange of the empty one. No wonder I never really noticed it happening. - the magic of Christmas.

The children had pics in their new pajamas beside our tree. A tradition Theresa has started for her family. Of course Santa was left a large glass of milk and a Christmas mince pie which Kate got ready.

Keeping traditions that are special to you and making new ones of your own are important for memory making and building a strong family. The traditions and not the actually gifts etc are what make the special events in life, beautiful times.

Christmas Day dawns warm and fine and the children had unwrapped their stocking gifts before I rose!. We had breaky and after a family Christmas Church service we went out to Carl and Sarah's for a lovely time celebrating the birth of Jesus.

As usual Sarah had prepared a beautiful meal with some help from her siblings and then, as our family traditions are, the giving of gifts from under the tree was had after the lunch time dishes were done.


It was a special time as all our (Harry and mine) family were their except our youngest - but I believe that one day she too will join us on the occasional time that we can all gather together in this joyous time to celebrate the birth of our Lord and Saviour Jesus Christ so long ago.
Back to News
Use left/right arrows to navigate the slideshow or swipe left/right if using a mobile device