But Doctor, Can I Still Run Trails? A Story of Three Injuries

Sidelined by injuries — or not — rest and recovery is important. Over the past few months I have had three somewhat serious injuries each requiring a doctor’s visit and two requiring imaging studies. I call them my trifecta of pain.

The first injury was in late February. I was scheduled to have my annual eye exam, which was about five or six months past due so I determined it was sort of in the annual timeframe window. Ironically, I had started noticing little black lines and dots in my vision while at a meeting in Denver. I thought these were bugs in the room zooming past my field of vision. As I started batting them away and rubbing my eyes, I realized these were not going away while at the same time, my colleagues thought I was overactive and simply couldn’t sit still. I just smiled.

Off I went to the doctor for my “routine”eye exam. Dr. A (as I’ll call her) asked if I’d had any changes with my eyes. In addition to probably needing a new eyeglass prescription for reading (I’d had the same glasses for about 15 years), I said I’d noticed some weird dark spots and spider web-looking things in my vision. Now, I’d remembered Dr. A saying at previous exams that as we age we sometimes get floaters in our vision. However, I thought I really wasn’t that old and she couldn’t be referring to me. Geez, maybe I really did have aging eyes. 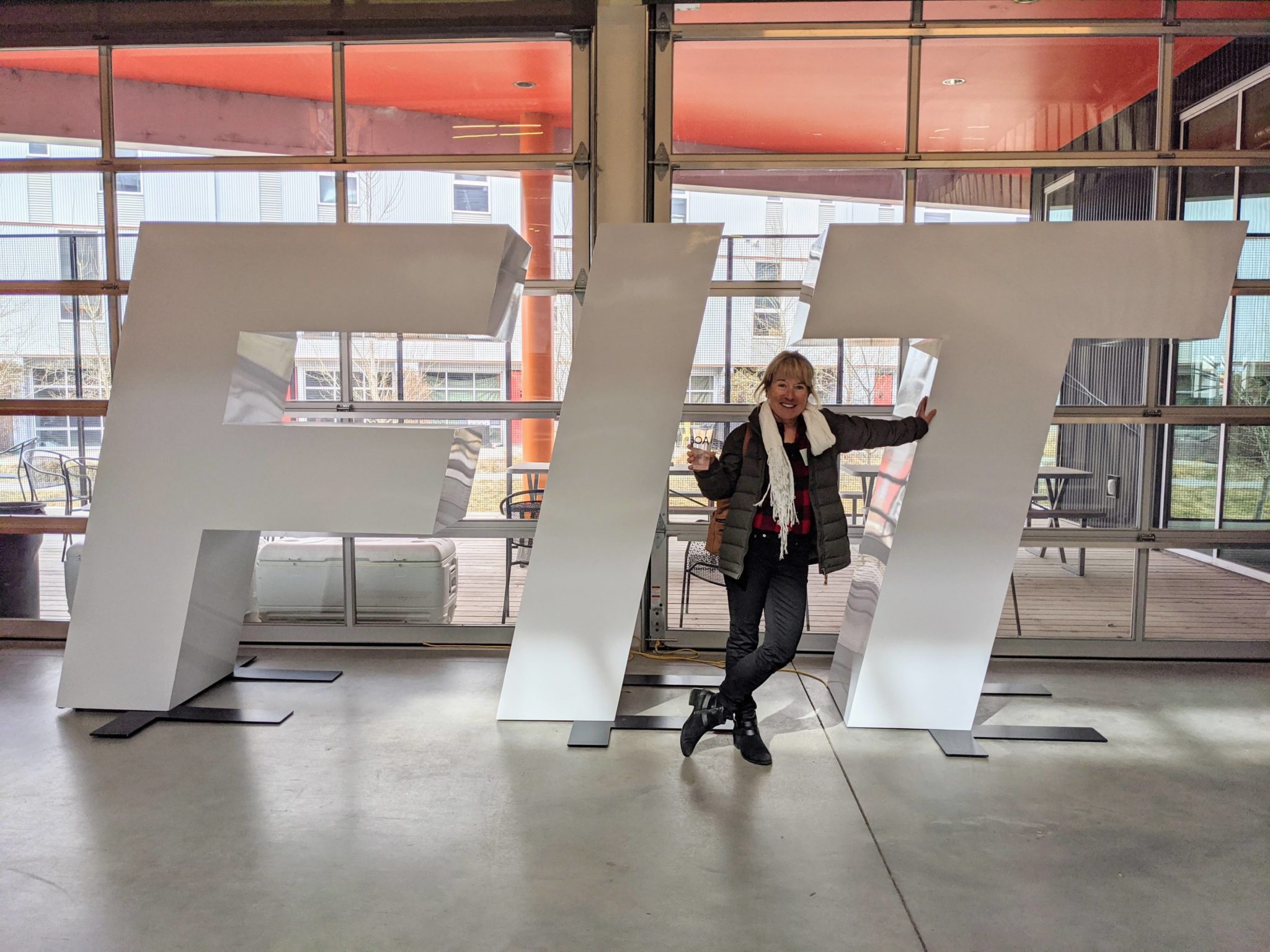 But no, it was way worse! I had a retinal hematoma. Dr. A proceeds to tell me that it could get worse and lead to a detached retina. Holy crap! So she says to not do anything jarring, and to certainly not turn upside down, or stand on my head. She says to come back to see her in three weeks unless I saw white streaks of light similar to a curtain closing, or really big black spots and then I was to call immediately.

So I ask, “Can I still run?” to which she replies, “Just don’t do anything jarring.” Hmmm. Having gone down this trail before, I repeat, “But, I run like, every day. So can I still run?” She ponders the question and says, “Well, how far do you run.” I say, “Between five and 10 or so mile a day, about 40 miles or so, a week.” She sighs, takes a breath and says, “Sure, as long as it doesn’t cause any jarring.”

I left the doctor’s office with my eyes dilated and a certainty that the next step was blindness. But, was I more worried about not running? Sort of. I called my BFF from the eye doctor’s parking lot and told her the news about the hematoma and she said, “Can you sill run?” She knows me all-too well. I said, “Yep. As long as there’s no jarring.”

Fortunately, the eye injury healed and I was able to run through it and there was no further damage. Best of all, I’m no longer seeing floaters so maybe I’m not all that old yet.

Injury number two happened just a few weeks later. I was awoken in the night by intense throbbing in my arm. I got out of bed, turned on the light and noticed a huge lump on my left arm just above the elbow and below the shoulder — sort of around the bicep. I put some ice on it, wrapped it in an ace bandage and tried to go back to sleep. By the morning, I couldn’t fully extend my arm and the swelling was way worse. I called the doctor’s office and even though it was right when COVID-19 hit, they were able to see me later that morning. I was convinced I had a tumor, because I hadn’t remembered hitting my arm, or doing anything to cause the lump to appear. While I’m telling Dr. B that I’m worried about it being a tumor because my Dad died from a glioblastoma — an inoperable brain tumor — and surely, even though a glioblastoma was supposedly not hereditary, I wanted to rule it out.

The doctor was concerned enough (maybe I sounded a bit crazy), that he got me a referral for an MRI (he assured me it probably wasn’t a tumor, but possibly a torn biceps tendon?!). Before I left the office, I asked Dr. B, “Can I still run?” to which he replied, “As long as you don’t fall on it. Stay on flat roads and be careful.” Whew. I was relieved. I could still run. 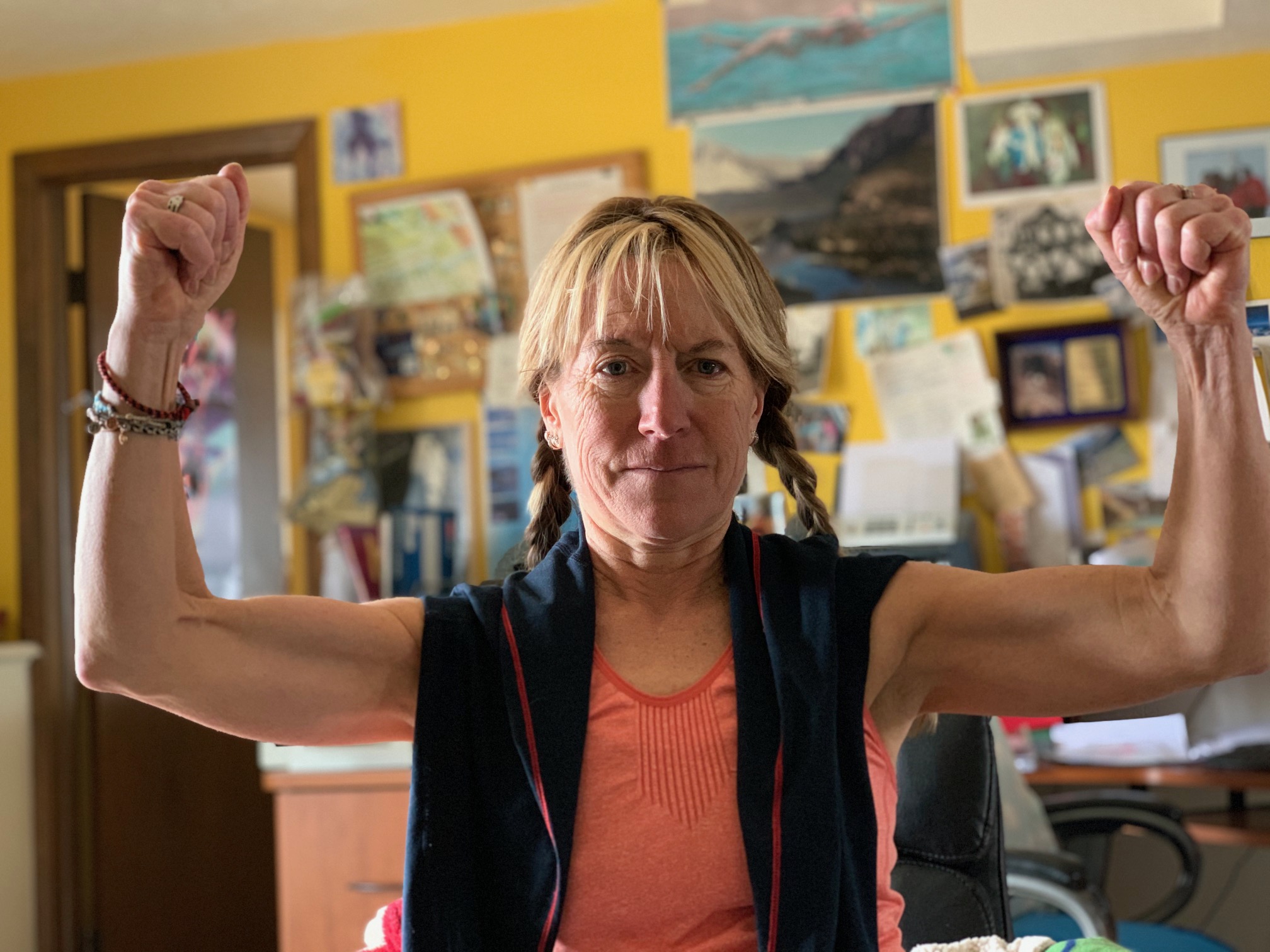 After dealing with the insurance company and first having to get an X-ray (which showed nothing), and then finally the MRI a few days later, it was revealed that I had a partially torn brachialas muscle and I was referred to a specialist. Fortunately, the specialist, Dr. C, was an athlete. He read the imaging and concurred with the diagnosis, although it was a bit of an odd injury since I didn’t remember doing anything.

Then I thought back and said, “Well, I was sawing down a tree stump, and then carried about 8 bags of grain and a few bales of hay from my garage to the barn for my horse. Oh, and I had surgery on my left thumb a year ago in October and maybe I pushed it too much.” He understood immediately that I was “active.” He prescribed rest, ice, and rehab. I said, “Can I keep running?” To which he replied, “Sure, but I would stay off the bike.”

Injury number three also happened out of nowhere just a few short weeks later. I noticed a lump on my right leg, a goose egg really, located just to the inside of my shin. It didn’t hurt a lot so I went on a run and a bike ride (my arm was now pretty much healed and I could bike with no pain in my arm). I got back from the bike ride and noticed that my lower leg was tight, the goose egg was larger, and I had deep lines where my sock hit just above my ankle revealing a lot of swelling.

I called my BFF, who by then had been through both of my previous injuries offering support and advice along with the medically prescribed care. I call her because two of her family members are doctors, (plus one is in medical school), and I’m sure some osmosis in the field of “doctordom” has rubbed off on her. Plus, she’s had her share of injuries. We go through the standard DIY online with WebMD and a bit of agent Columbo detective work, and figure it ranges from an infection (I did remember bumping into a Yucca a few days earlier), to blunt force trauma (I didn’t recall any…except I’d fallen off my bike on the right side when I couldn’t get my cleat unclipped soon enough while at a standstill), a cyst (I had a lipoma some 30 years ago on my back and maybe it reinvented itself on my leg), to overuse (surely not). Armed with all of our WebMD knowledge and no definitive diagnosis. I gave in and called the doctor because…I couldn’t run since it hurt so much and simple icing wasn’t helping. It had been one day of no running mind you. 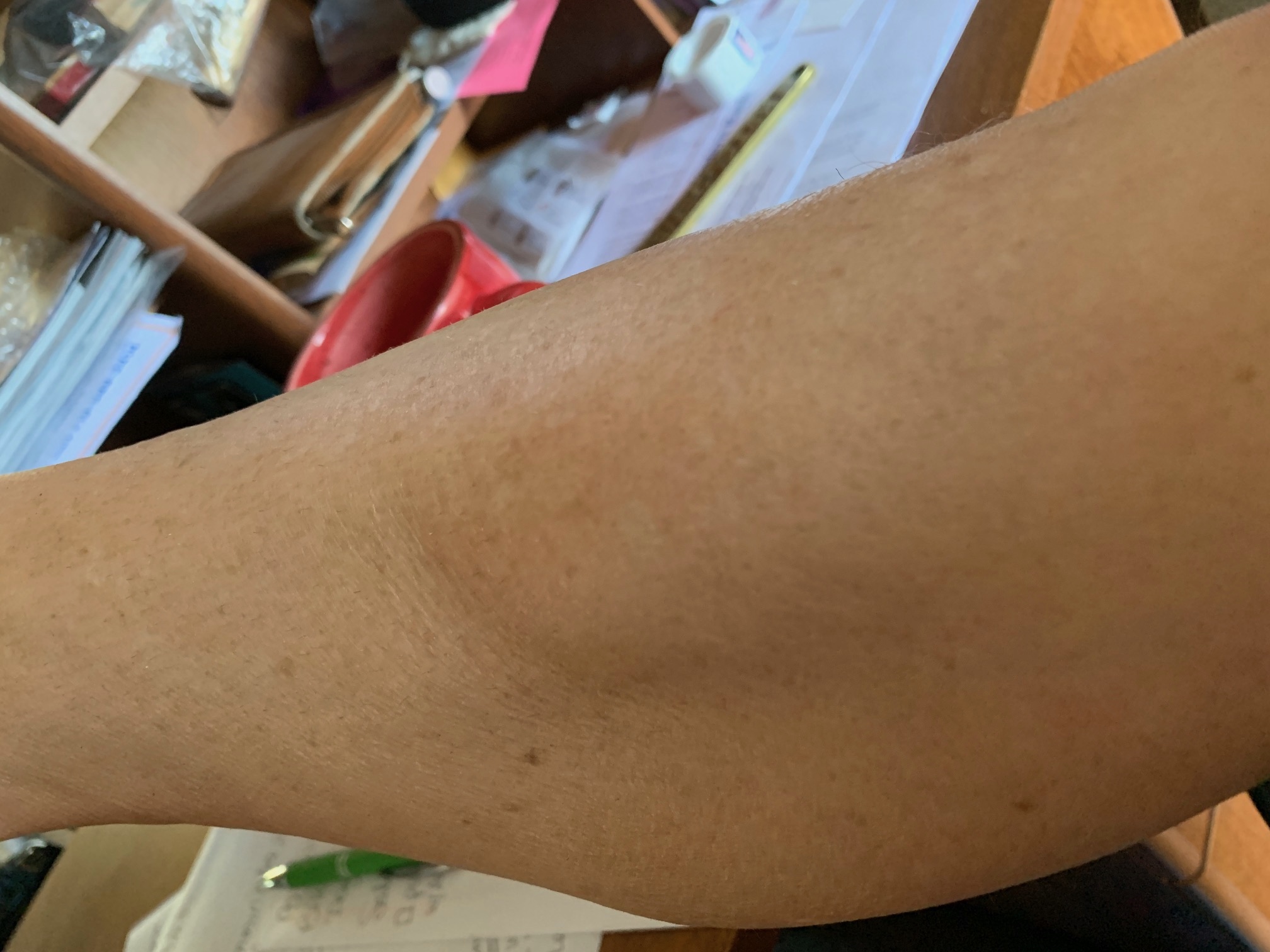 Good news, the doctor could see me right away, but not Dr. B, rather Dr. D. Same office, different doctor which is fine by me since Dr. B might think I’m accident prone. The receptionist remembers me at check in and I tell her that I hope it’s not a pattern.

Dr. D says it’s very odd, but rules out tumor (it hasn’t been there long enough), infection (the skin doesn’t feel or look like there’s poison in my leg), and zeroes in on a soft tissue injury. To be sure, he orders an X-ray and ultrasound. I’m feeling optimistic and I say, “Presuming it is soft tissue…when can I run?” To which he replies, “Let’s see what the imaging shows. If it is soft tissue, it could mean no running for 6-8 weeks.” I’m horrified of course. “Are you sure?” I say. Indeed he is, “You need to take this seriously and let your leg heal,” says Dr. D.

I needed to find out immediately what I was dealing with so I was off to the diagnostic center. By 4 p.m., the results were in. The lump was a muscle contusion, soft tissue. Well, that’s not so bad I thought to myself, but, how soon could I start running.

Like every other trail runner, I’m not immune to injuries. I’ve been fortunate that I haven’t had crippling, long-term injuries, but I’ve had my share of tweaks, niggles, and even surgeries. A few things I’m learning (sort of ), as I age. I’m not 25 anymore and injuries take longer to heal and flare-ups are more common. This is all the more reason to do preventative care like frequent massages, physical therapy visits for chronic issues, stretching, rolling, cross training, and rest. Taking a day off from running even when one is “healthy” is ok, and even advisable. In summary, there’s a lot to be said for rest and recovery. Our bodies need it, even more so as we age. Now I just need to take my advice! 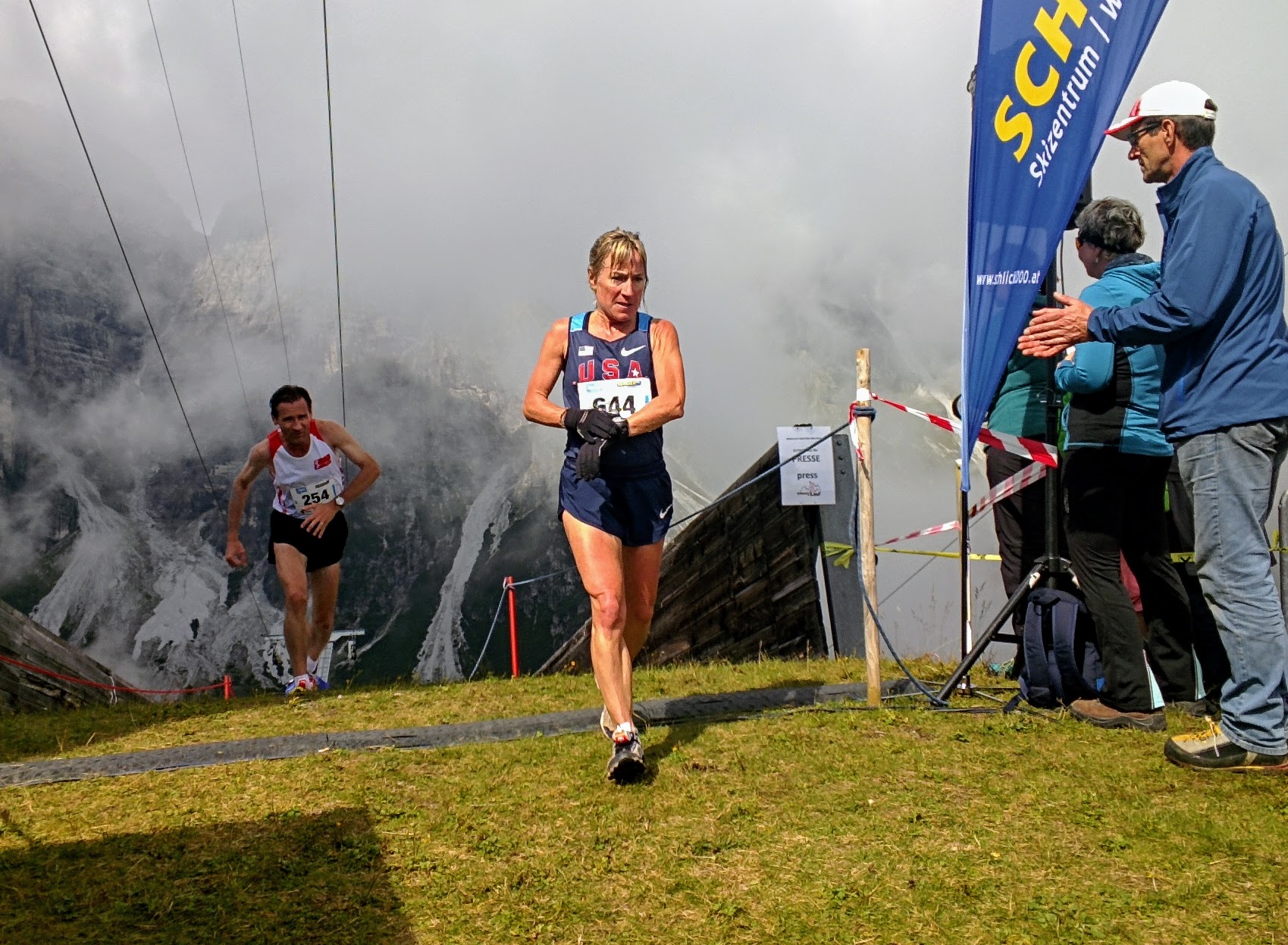 The post But Doctor, Can I Still Run Trails? A Story of Three Injuries appeared first on ATRA.