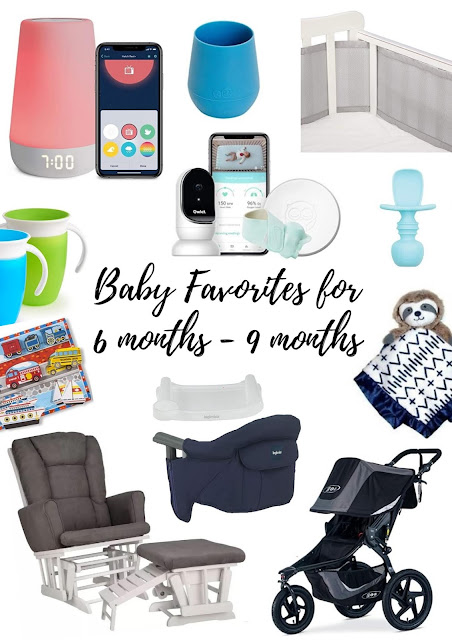 Now that Calvin is almost a year old, I realized I never shared our favorite baby items from ages 6 months-9 months.  At this point, he was sleep trained (11-12 hours per night), just moved into his crib in his nursery, and started Baby Led Weaning, so sleeping and eating take up a lot of this list. 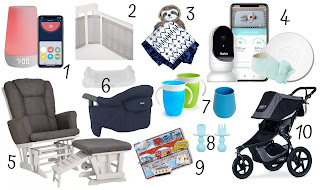 Hatch Rest+: Let's start with baby sleep.  Now that Calvin is in his own room, we bought him a Rest+ to use now as a sound machine and later to help him know when it's time to get up.  Right now, we use no light and the white noise sound all night, then at 7:30am, we set a program so that the sound stays the same but it adds a little rainbow light.  It's not enough to wake him up, but we hope as he gets older, he'll understand the "time to rise" feature.  We chose the Rest+ (instead of the original Rest) because there's an option for a 2-way audio monitor and a clock on the front (which we have turned off right now but hope to help Calvin learn to tell time with "time to rise" feature in the future).

Crib mesh: This was a decision that we made for Calvin because we feel that it's best for him.  Little boy (even in a sleep sack) is squirmy, and immediately into moving into his crib, he got legs and arms stuck out of the crib.  This fixed the problem immediately, and I actually think it provides an even cozier, darker environment for him. 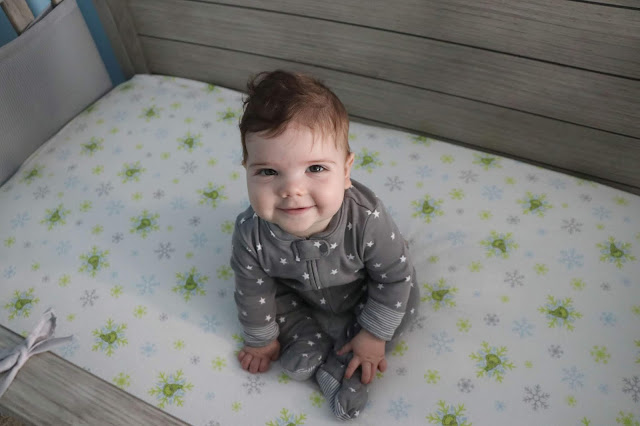 Lovey: Calvin's sloth is another choice we made that goes against AAP's recommendations.  However, it was suggested by the Taking Cara Babies classes we took, and it seemed like something that would work well for him.  He never really took a pacifier, so to help him soothe at night, he has his "sloth-a-man" in his crib.  Sloth never leaves his crib, and Calvin has really made the connection between sloth and sleep.  The minute I hand him the sloth, his thumb goes in his mouth, he smushes it in his face, and he's content.  Actually, finding the link to sloth on Target, I just bought a third one (yes, we already have two that we switch in and out - I have one under my pillow in addition to his in his crib), JUST IN CASE. 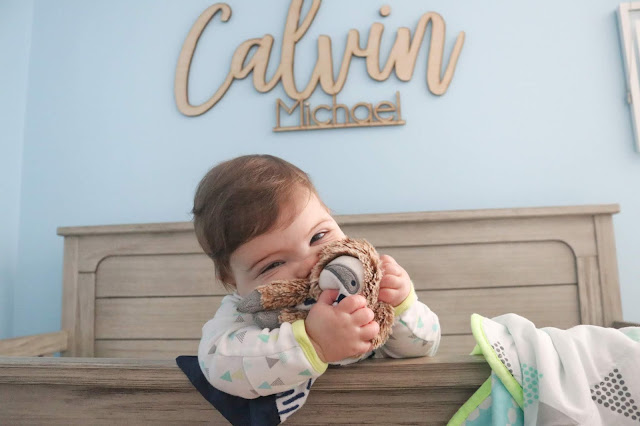 Owlet: I shared my love for our Owlet sock and camera in our "first two months" post, but it deserves love again for a few reasons.  Calvin is in his own room now, which is stressful enough.  On top of that, I mentioned the lovey and crib mesh above, both of which are personal decisions that work for our family but are made much less stressful knowing that we are tracking Calvin's heart rate and oxygen levels.

Glider: Another item that I didn't use very much at all before Calvin moved into his nursery was his glider.  We thought about buying an expensive one from La-Z Boy but decided on this one from Target.  He nurses in it for most feedings, and we read books in it.  It's actually held up really well, and I'm super happy with it.

High chair: We have a dining room but don't eat in it often, so we knew that when it came time for Calvin to start eating, we wanted something for our kitchen counter.  This chair is perfect!  I love the tray because it keeps the mess in one place, the navy color hides a lot of the stains, and (even though it says not to machine wash) it washes and dries easily. 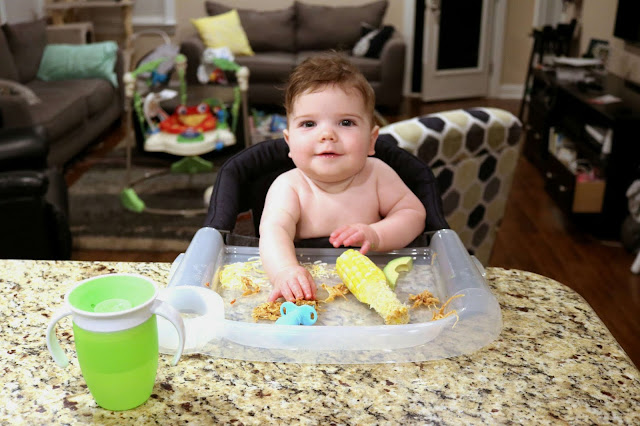 Utensils: Teaching a baby to use utensils is pretty funny, but these chewtensils are great.  They're super safe and the company, Bumkins, also makes this silicon plate that we also bought.

Cups: Once Calvin started with meals, we knew we wanted to offer open cups and sippy cups instead of a bottle at mealtime.  We bought these Munchkin 360 cups as well as an ezpz open cup (basically a silicon shot glass haha).  He does really well with both of them! 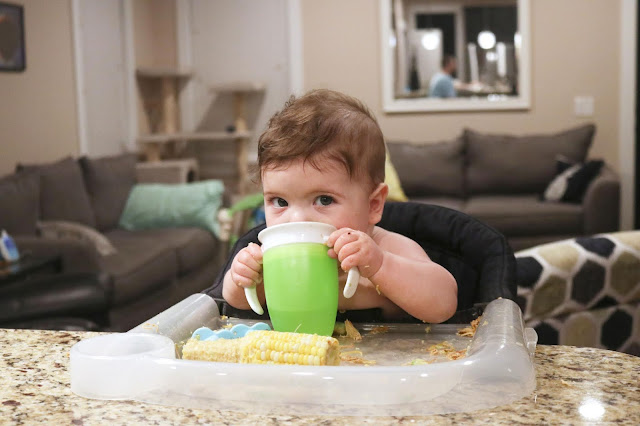 Wooden toys and puzzles: Calvin started loving wooden toys at this age.  He's subscribed to Lovevery play kits every 2 months that have awesome wooden toys, and we also love Melissa & Doug puzzles.  He likes the big chunky ones to chew on, and the peg puzzles are great to work on his fine motor skills.  They also make sound puzzles that are really fun! 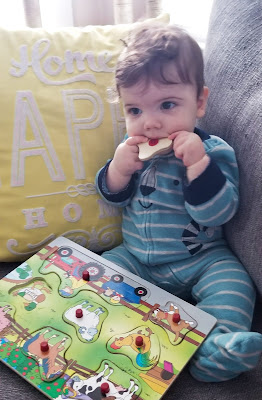 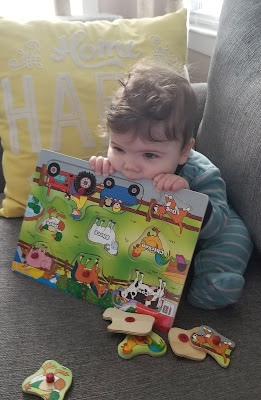 Jogging Stroller: I absolutely love my BOB jogging stroller and think it's worth every penny.  I started getting back into running after Christmastime (when Calvin was 7 months) and love spending the mornings with him.  It's also great for trail walks around our neighborhood.  Even if we're just out and about (and may be through nap time), we bring this stroller because Calvin can lay flat, and it gets so dark under the sun shades.  I also bought this tray to have storage for my phone, drink, etc. 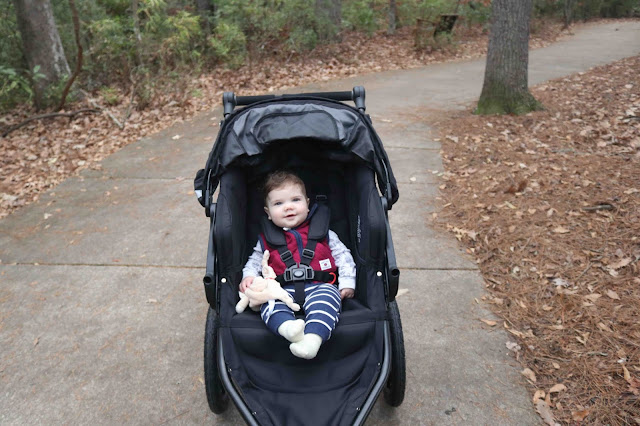 If you missed it, you can click on the photos below to see our two previous favorites posts: 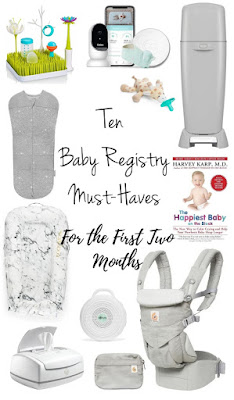 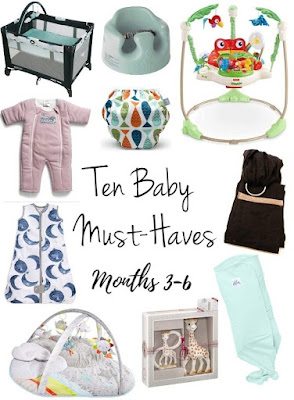