Are you a Grinch? Turns out I Might be.Were Both Highly Sensitive People

During my training to become a Certified Stress Mastery Educator through Dr. Heidi Hanna and the American Institute of Stress, I learned about the term highly sensitive person (HSP).

During one class, Dr. Hanna unequivocally said that I was a highly sensitive person myself because of a question I had asked (on paper) anonymously to the class, but obviously quite personally in my own mind!

Highly sensitive person sounds like kind of a wimp, I thought.

I was determined to learn more about this, since Dr. Hanna admits that she is an HSP as well.

It turns out about 20% of the population has the personality trait highly sensitive as coined by Elaine Aron in the mid-1990s. Because there are so many of us, being a highly sensitive person is not an anomaly or a disorder. Its just a variant.

And Ive come to believe that the Grinch, yes,the Grinch himself, must be a highly sensitive person.Ifhes a person, that is. I suppose he could be an HSG instead of an HSP?

Wondering what a highly sensitive person is? The Grinch isnt some sort of wimp, right?

Here are 7 reason the Grinch is surely an HSG:

1. Highly sensitive people may have their physical senses tuned a bit high.

Its obvious that the Grinch has a bit of sound sensitivity.

My family thinks Im a bit crazy too when the sound of the fan over my stove makes me batty. When I can finally turn that blasted thing off, you can see my whole body physically relax, and I become a nicer person.

The Grinch also may be a picky eater, as evidenced by his taste sensitivity and aversion to rare roast beast in the newest film version of the tale (which is quite lovely and well done if you havent seen it yet).

That old Grinchy also has a bit of a light sensitivity as shown in his aversion to Christmas lights.

These are all potential signs that someone may be highly sensitive, quite literally theirsenses react more strongly to the physical worldthan the rest of the population. This can include sound, light, taste, and as well see in a moment, touch as well.

2. Highly sensitive people can be touchy.

One theory for the Grinchs grinchiness is that his shoes were too tight. How could someones tight shoes have such a powerful impact on his whole sense of being?

Well, if he were highly sensitive, those tight shoes really could ruin his day.

Highly sensitive people are often those who want the tags cut out of their clothing and find certain fabrics to be too scratchy.

And yes, certain shoes to be too tight. (I get deep aches in my shoulders when I wear a suit coat or my winter pea coat too longwhich weighs, what 0.3 pounds? Its not exactly a heavy burden with which to be yoked!)

Its not just a Grinch problem you see.

3. Highly sensitive people thrive on routine and like to know what to expect.

For decades, the Grinch has been portrayed as hating Christmas. Perhaps it was just that change in routine?

In the latest film version of the tale, the Grinchs deep need for routine and knowing exactly what is coming, is portrayed quite humorously in his creative and complex dwelling far up the mountain. One can tell that each day starts exactly the same.

One of my sons, definitely highly sensitive, must ask every night before he can sleep: What are we having for breakfast and what are we doing tomorrow? No answer, no sleep for him!

Because highly sensitive people have a heightened threat sensitivity, we notice everything: the one bulb thats burned out, the bug crawling across the floor, a change in temperature.

For example, I know that our neighbor 10 doors down got a few branches cut off his tree this week, I see every sock left on the floor, and Im always the one who can remember that my husbands wallet was on THIS surface and not THAT surface, simply because it was out of place and caught my eye.

The Grinch notices every nail on the mantle, every crumb small enough to feed a mouse.

Like the physical sensations of sounds and odors, motion and change in the environment may indicate that a threat is evident.

Having a heightened threat sensitivity can be helpful if there are actual threats, or perhaps if Im hunting a wild animal and need to be alert, but if the threats are only perceived, it can really be stressful.

Therefore,routine and consistent expectations are golden for a highly sensitive person (or Grinch).

4. Highly sensitive people may prefer to be alone.

And this may mean he is simply an introvert, but its also often a sign of high sensitivity.

More introverts happen to have the highly sensitive trait than extroverts.

It makes sense that if abrupt sounds and changes in routine are disruptive to the highly sensitive person, being alone is a pretty safe way to keep all of that from intruding on ones deep interior life.

The Grinch himself makes this quite clear.

5. Highly sensitive people are often deep thinkers and very creative in their own way.

All that alone time has made the Grinch one of the most creative problem solvers in all of literary history, dont you think?

I mean, theinventionshe comes up with to steal all the Whos Christmas trappings in one night? Incredible!

From the super strong magnet in the original to his many-faceted candy cane in the new version, the Grinchs methods of getting nails out of the wall are only the tip of the iceberg when it comes to his creative genius.

Does the Grinch solve problems in exactly the way his boss might expect? Perhaps not.

Would he pass all his standardized tests? Anyones guess.

Does he stay in his lane and inside the box? Not really.

This can all be a sign of the deep interior life of a highly sensitive person, and it leads us quite handily into the next piece of evidence. 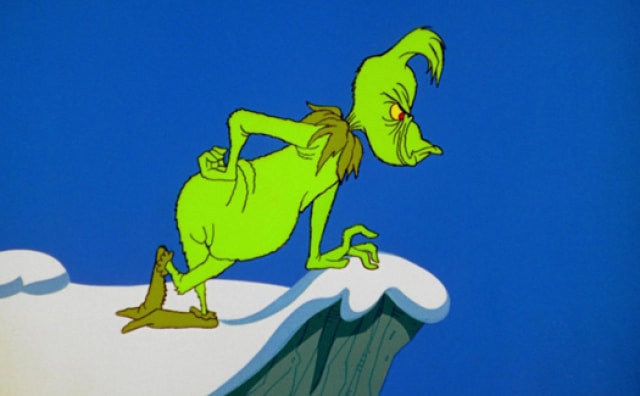 Poor Mr. Grinch! If anyone is as misunderstood as him, Im not sure who it would be.

Hes called a bad banana. His heart is accused of being an empty hole, and our lyricist wouldnt touch him with a 39-and-a-half-foot pole!

Hes clearly most misunderstood, in light of our previous point, whenhis brain is said to be full of spiders. Ha! He has a very creative and logical brain all at once!

Andreally, would a highly sensitive person ever stink, stank, stunk? Of course not! Their delicate nose would never allow it!

Oh yes, the Grinch is most definitely misunderstoodalthough perhaps he brings a bit of it on himself when he rides a sleigh into town, attempting to eradicate a centuries-old tradition single-handedly?

7. Highly sensitive people think they need to change the world (or no one else will do it).

The Grinchs motives may be a little skewed here, but its classic for a highly sensitive person to see problems in the world around them, feel them so deeply and personally, and then assume, in their interior mind, that they somehow must be the one to save the world,or no one else will do it.

The pressure this can put on an HSPs mind and heart can beintense, which is why they may be seen as moody at times.

Theyre just thinking about how difficult it might be to achieve world peaceall by themselves.

Perhaps the Grinch had just been secluded for so very long that all the worlds problems were distilled down into a microcosm of just his problems.

But still, he magnified them and also had to solve them all. In one night!

What About a Highly Sensitive Persons Empathy?

Highly sensitive people are also often very empathetic, able to feel the energy of other peopletake their position and experience, (Dr. Tracy Cooper) which the Grinch could finally step into by the end when his heart grew three sizes that day.

Thats why Im sure the Grinch is a highly sensitive person.

Even though he certainly was sensitive to all the sounds of that singing and the lights re-lit after he brought them back, even though his shoes were probably still too tight and it was a disruption in his routine, even though he had no idea what to expect and would have rather been alone his rich interior life and deep thinking (once his heart was big enough), allowed him to push through the feeling of being misunderstood, and he realized that it was, in fact, up to him to save Christmas!

Like most highly sensitive people, when his talents were properly understood and used, he became a true gift to society.

The Grinch just needed a littlenurturing, understanding, and time and spaceto be himself.

Our culture doesnt always value quietness, creativity, and conscientious, deep thinking. But the 20% of us who have that propensity plus a heightened threat sensitivity will, in fact, be able to save the world in the end.

Just make sure our shoes fit.

And for the Grinchs sake, turn that music down!

Do you think you know any Highly Sensitive People in your life? If this post has started to unravel some questions for you, stay tuned for more and be sure to share with friends!

Well be doing a few interviews this spring about Highly Sensitive Children and how to parent them on theHealthy Parenting Connector, so be sure to subscribe so you dont miss them!

The post Are you a Grinch? Turns out I Might be.Were Both Highly Sensitive People appeared first on Kitchen Stewardship | Caring for All Our Gifts.